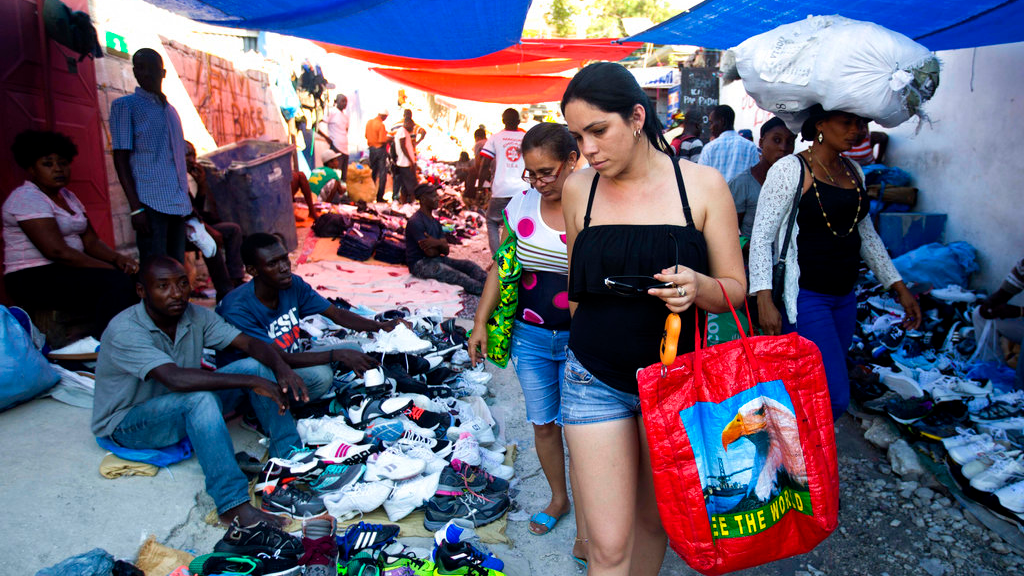 Most people don't think of Haiti as a shopping destination. Unless they're Cuban.

Every afternoon, hundreds of Cubans swarm a rutted crossroads in the capital of the hemisphere's poorest nation, hunting clothes, light bulbs, perfume and other goods that are in short supply back home.

"There are thousands, thousands of Cubans," Luis Dominquez said. "There used to be four or five; now they've taken root. It feels like all of Cuba is here."

The "Cuban market" in Port-au-Prince is part of a global trade, estimated to top $2 billion, fed by the confluence of Cubans' increased freedom to travel with the communist state's continued domination of the economy back home.

Clothing, housewares, hardware, personal-care products, and other goods at state-run stores in Cuba cost two or three times what they do elsewhere. And that's when they are on sale at all in an economy hampered by incessant shortage. What's more, Cuba's state monopoly on imports and exports excludes the small but vibrant private sector, which employs more than a half million people who often earn three or four times a state worker's salary.

Since Cuba did away with a hated exit permit five years ago, Cubans are packing flights to destinations with easy entry requirements. In Port-au-Prince, Panama City, Cancun, Guyana, Trinidad and Tobago, even Moscow, Cubans are packing suitcases with goods for personal use and resale back home.

In Panama, the Colon Free Trade Zone has a "Little Havana" where Cubans spent $308 million last year, and are on track to spend perhaps 8 percent more in 2018, said Luis Carlos Saenz, the zone's general assistant manager.

"We now have an important Cuban clientele who came to make purchases and are making a significant contribution to business in the zone," Saenz said.

Panama is so eager for Cuban business that its embassy in Havana has started giving Cubans with private business licenses on-the-spot "tourist cards" that eliminate the need for a lengthy visa application process.

"More Cubans are coming now because of the tourist cards," said Jose Hernandez, who was shopping in the free zone with a group of relatives last week. "Taking back an air conditioner, an electric motorcycle is a big deal for us. In Cuba, that's gold."

That sort of business tourism has diversified a trade long centred on South Florida, where Cubans with family ties in the U.S. relied on relatives to shuttle in personal or business goods. Driving the trade away from Miami has been the Trump administration's decision to pull most staff from its Havana embassy last year, ending visa processing there and forcing Cubans to travel to third countries to apply for permission to visit the U.S.

The Miami-based Havana Consulting Group estimated in an August study that Cubans spent more than $2 billion in 2017 on bringing goods back to the island.

That spending may equal anywhere from 2 percent to 5 percent of Cuba's gross domestic product, depending on which of the wildly varying estimates of GDP is used in absence of reliable economic statistics on the island's economy.

Cuba maintains tight restrictions on the quantities that individuals can import, and working as a "mule" — bringing goods back for others — is technically prohibited, according to some official statements, but it is rarely prosecuted.

Haiti, which is struggling with increasing violence and a devaluing currency, appears to be grabbing an increasing slice of the Cuban shopping pie.

In the neighbourhood surrounding the market, dozens of Cubans run bed-and-breakfasts for traveling shoppers in homes rented from Haitian owners. Dozens of Haitian "guides" help Cubans hunt down specialised goods like electronics and hardware.

"I have visas for Panama and Mexico but I like Haiti," said Eduardo Leiva, who runs a small hardware business in Cuba. "There's great variety of merchandise, a level of product that you don't find in other countries."

Tiny Sunrise Airways runs 12 direct flights weekly from the Cuban cities of Havana, Camaguey, and Santiago to Port-au-Prince. Cubans interviewed in the market said they spend about $700 on airfare, food and lodging and another $700 on merchandise, which they resell at a markup high enough to make several hundred dollars profit per trip.

Most of those interviewed said they made near-monthly trips, generating more than $2,000 in extra income a month in a country where annual state salaries are less than $400.

"The Cubans are very good for us. They come, they take merchandise back home, we get to make a little profit," said Terese Rencher, who buys Peruvian-made T-shirts with designer logos in the Dominican Republic and sells them at the "Cuban market."

"This is how I sent my kid to school, to university," said Rencher, who said her 23-year-old daughter is studying at a hotel school in Port-au-Prince.

Some Cubans said they had been robbed by young men aware that Cubans can be carrying large sums of cash, but they still preferred the quick trip to the neighboring island over the odysseys many Cubans undertake to feed their country's informal retail market.

"Compared with Russia, Haiti is closer, it isn't cold, and the merchandise is practically the same," said taxi driver Braulio Hernandez, who was hunting tools and parts for his home car-repair workshop.