Cyclone's death toll into the hundreds in southern Africa 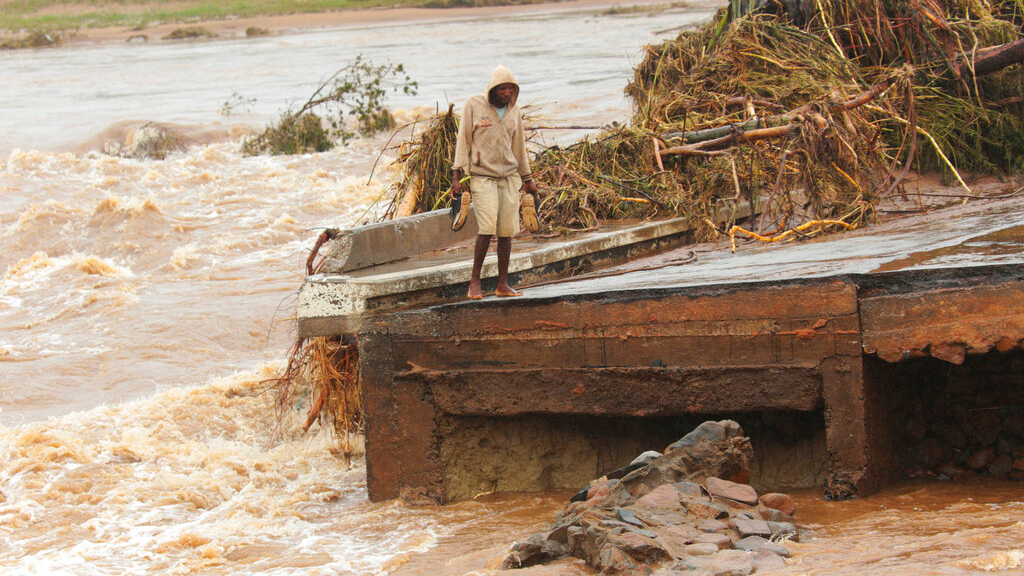 A man stands on the edge of a collapsed bridge in Chimanimani, about 600 kilometers southeast of Harare, Zimbabwe, Monday, March 18, 2019. (AP Photo/Tsvangirayi Mukwazhi)

Rapidly rising floodwaters have created "an inland ocean" in Mozambique endangering scores of thousands of families, as aid organizations scramble to rescue and provide food to survivors of Cyclone Idai.

Mozambique's swollen rivers have already flooded huge expanses of the country and continued rains are causing the waters to rise, endangering people on rooftops and clinging to treetops, said emergency workers.

"This is a major humanitarian emergency that is getting bigger by the hour," said Herve Verhoosel of the World Food Program on Tuesday. He said large numbers of people are "crammed on rooftops and elevated patches of land outside the port city of Beira" and WFP is rescuing as many as possible and providing airdrops of food, water and blankets.

Mozambique's Pungue and Buzi rivers have overflowed, creating "inland oceans extending for miles and miles in all directions," said Verhoosel.

"People visible from the air may be the lucky ones, and the top priority now is to rescue as many as possible and ferry them to safety," he said.

Four tons of high-energy biscuits are being air dropped Monday as part of 20 tons of food that WFP will distribute.

Cyclone Idai created massive damage as it swept across central Mozambique before dropping huge amounts of rain in Zimbabwe's eastern mountains. That rainfall is now rushing back through Mozambique further inundating the already flooded countryside.

"It's dire," Caroline Haga of the Red Cross told The Associated Press from Beira. "We did an aerial surveillance yesterday and saw people on rooftops and in tree branches. The waters are still rising and we are desperately trying to save as many as possible."

Satellite images are helping the rescue teams to target the most critical areas, said Haga.

"We're in a very scary situation," she said. Rescue operations are based at Beira airport, which is one of the few places in the city that has communications.

The flooding disaster is also affecting Malawi and Zimbabwe where hundreds are dead, many more are missing and thousands are at risk.

Mozambique's President Filipe Nyusi has said the death toll could reach as high as 1,000. Although emergency workers warn they do not know whether the fatalities will reach that estimate, they say this is the region's most destructive flooding in 20 years.

Hardest hit is Mozambique's Beira port, a city of 500,000 where thousands of homes have been destroyed.

The city and surrounding areas have no power and nearly all communication lines have been destroyed. Beira's main hospital has been badly damaged. The cities of Dondo and Chimoio in central Mozambique are also badly affected.

The medical charity Doctors Without Borders said its work in Beira and other local health centers had "ceased completely" but it was working to resume operations. The group anticipates that water and hygiene needs will remain high in the coming days.

In Zimbabwe the death toll has risen to 98, the government said. The mountain town of Chimanimani was badly hit. Several roads leading into the town have been cut off, with the only access by helicopter.

Malawi's government has confirmed 56 deaths, three missing and 577 injured amid the severe flooding. Rivers have burst their banks, leaving many houses submerged and around 11,000 households displaced in the southern district of Nsanje.