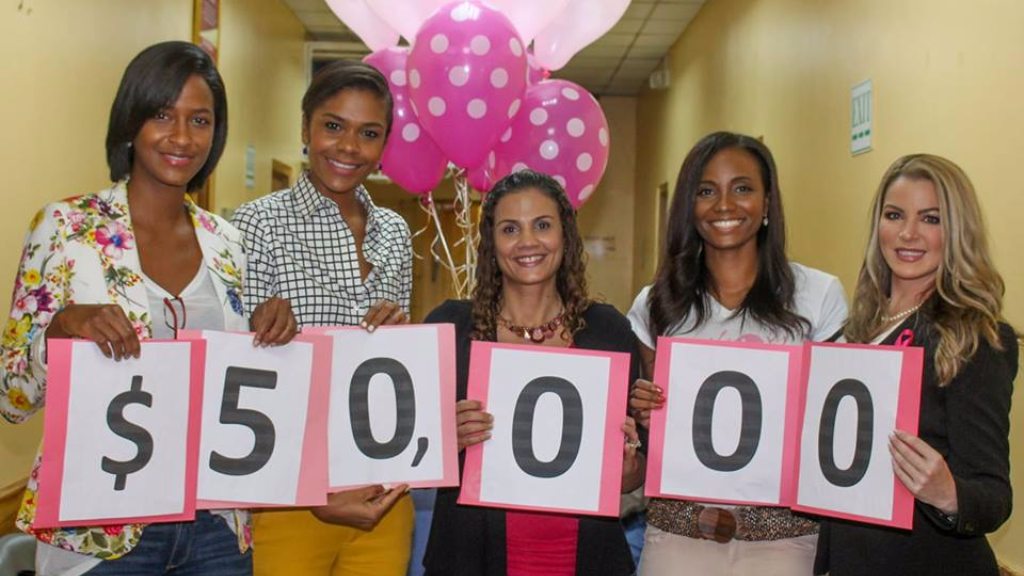 The Associates of the Radiotherapy Centre (ARC) now has $50,000 to further support their breast cancer awareness and cancer patient initiatives.

This is thanks to The Pink Tea, a pink carpet breast cancer awareness fundraiser that was hosted by former Miss Universe finalist 2004 Danielle Jones-Hunte on Sunday.

'It was emotional visiting the Radiotherapy Centre again," said Jones-Hunte, whose mother and aunt received chemotherapy there. "I know the ARC will use the money to really help breast cancer patients and others who use their services in St. James."

At the cheque handover, Jones-Hunte was joined by Leah Guevara of Tribe (the largest single donor to the event), Shannon Hutchinson representing Anansi Tales Marketing and Krista Clarke of Party and Events for the check donation to a very surprised Dr. Morton Gittens, treasurer of the ARC, who was shocked at the amount raised.

All guests at the event were required to wear touches of pink and to know their breast cancer facts for interviews on the pink carpet, which served as the entrance to the event.

To ensure that the breast cancer awareness messages and of course the fashion, could be viewed by those not able to attend the event, Jones-Hunte co-hosted a Facebook live broadcast of the pink carpet offering guests and viewers a true 'celebrity feel' to the event.

"I was overwhelmed that everyone interviewed knew their breast cancer facts for the pink carpet interviews. We even had giveaways during the live feed thanks to bmobile, Huawei, Sinnamon Spa and Precision Point Caribbean, so folks at home who answered questions were able to watch, interact and win."

Eleven thousand people watched the live online coverage of the event which has now been viewed  21,634 times via the event's PinkTea  Facebook page. The page has had over 300,000 interactions over the past month, demonstrating initiative turned up the volume on breast cancer awareness.

"The biggest winner of all is breast cancer awareness, " said Jones-Hunte.

"Tribe, Tobye and Shoma, Christian Boucaud, Cakes By Cheye, Dee Lightful Productions and a number other official partners of The Pink Tea 2017 that donated directly to the event all turned their logos pink in the run-up to the event and shared breast cancer messages. Others like AMCO and Chaud Cafe offered products on specials with funds going directly to this year's charity," she added.

When asked what inspired her to create such an event, Jones-Hunte said, "My son has no maternal grandmother because breast cancer awareness was a secret back then. I hope fewer families have to suffer that fate and if this little event helped inspire even a few women to do monthly self-breast exams and to talk to their doctor about breast health, then we succeeded."

Check out highlights from The Pink Tea.