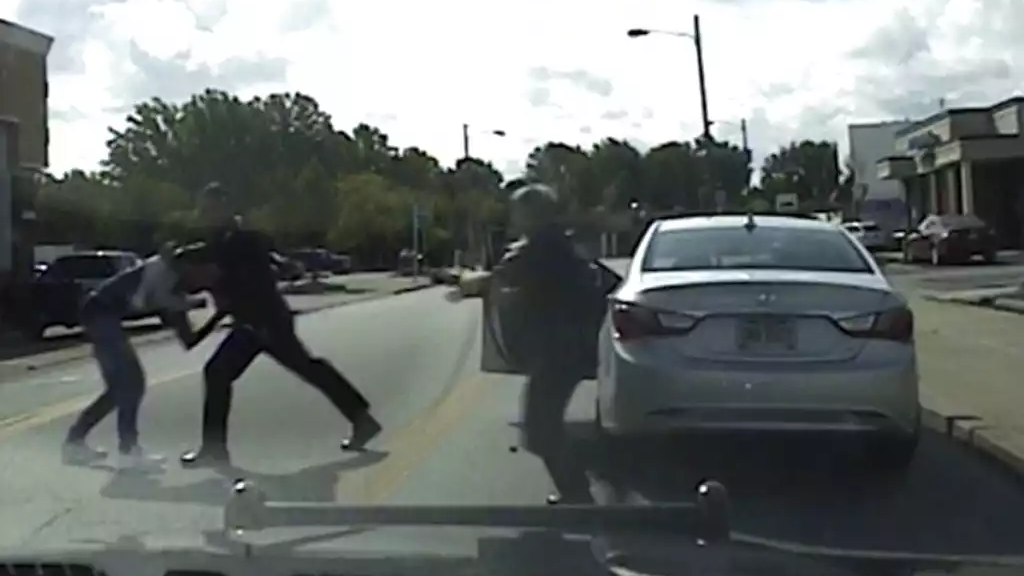 In this Saturday, Aug. 12, 2017 image taken from video provided by the Euclid Police Dept., Euclid police officer Michael Amiott grabs Richard Hubbard to arrest him on a street in Euclid, Ohio. (Euclid Police Dept. via AP)

A dashcam video of a traffic stop that led to a white police officer with a history of disciplinary issues repeatedly punching a black man and hitting his head on pavement appears to show a different sequence of events than police had originally described.

The initial statement from police in the Cleveland suburb of Euclid said Richard Hubbard III, who was pulled over on suspicion of having a suspended driver's license, had refused Officer Michael Amiott's orders to "face away" after getting out of his car Aug. 12 and then began resisting. But the video obtained this week in a public records request appears to show Amiott not giving Hubbard a chance to comply, Hubbard's attorney said Friday.

"Your own two eyes and common sense can lead to only one reasonable conclusion as to the propriety of the level of force used for a basic traffic stop and whether or not my client had a chance to comply," attorney Christopher McNeal said.

The dashcam video shows Amiott opening the car door and Hubbard getting out. Within a second of Amiott ordering him to "face away," the video shows the officer grabbing Hubbard's arms and wrestling him to the ground in the middle of a street as Hubbard's girlfriend jumps out of the car and rushes over.

The video shows Amiott bashing Hubbard's head against the pavement several times and then punching him in the head more than a dozen times as Hubbard tries to defend himself.

"Babe, stop," Hubbard's girlfriend implores, kneeling on the road and screaming as Amiott punches him repeatedly.

Some of the punches were thrown after Hubbard, who's 25 years old, spread his arms out and appeared not to be resisting. Increasingly frantic, Hubbard's girlfriend yells at officers that Hubbard is unarmed.

Hubbard is finally handcuffed with the help of another officer and taken to jail, where police say he was examined and then released after being charged with resisting arrest and driving with a suspended license.

The police union that represents Amiott issued a statement to WJW-TV that says: "We stand with Officer Amiott and we hope that people will not rush to judgment, but rather will understand the literally-split-second decision and response required of our police and will let the administrative review process play out."

Cellphone video that first drew attention to the arrest was taken from a nearby business. It shows Hubbard being struck but doesn't show the traffic stop or the first part of the arrest when Hubbard is taken to the ground. The video has been viewed more than 7 million times on Facebook.

Amiott was hired by the Euclid Police Department in September 2014. He was reprimanded for hitting a driver with a handgun, mishandling evidence, losing his temper in front of his commanding officer and being involved in two crashes in police vehicles, according to personnel files released Friday.

Before Euclid, Amiott was an officer in Mentor, east of Cleveland. Amiott resigned in April 2014 after an internal investigation concluded he had lied to other officers when explaining why he stopped a man for a suspended driver's license.

Mentor personnel files show that Amiott was cited for two vehicle accidents, eight speeding violations and one motorcycle violation while he was on a learner's permit before he was hired as an officer. In his application, Amiott indicated that the "danger" aspect of being an officer was one reason he was drawn to the job.

Both said the traffic stop would be "thoroughly" investigated to determine whether the officer followed departmental rules and procedures.

The American Civil Liberties Union of Ohio and the Cleveland branch of the NAACP issued a statement saying they are "profoundly concerned."

"We are appalled by the brutality seen in these videos," ACLU Executive Director J. Bennett Guess said. "This behavior underscores a disturbing pattern of extreme use of force by police in our state and across our nation."

A look at US-S. Korea war games and how North might respond