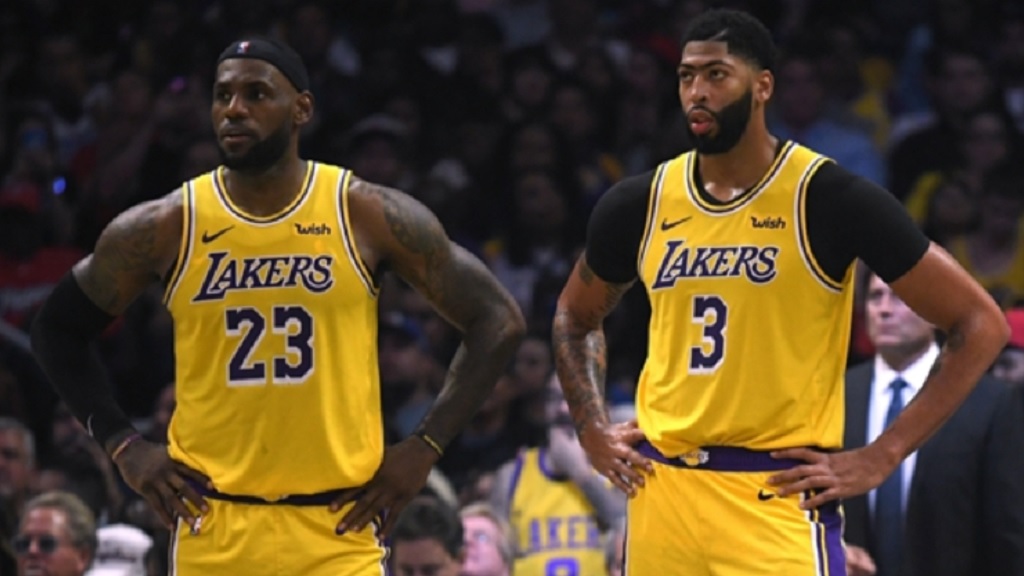 LeBron James and Anthony Davis during the Lakers' loss to the Clippers.

Anthony Davis says he and LeBron James are "trying to figure it out" as he outlined areas for improvement after the Lakers lost to Los Angeles rivals the Clippers in his debut for the team.

The Clippers triumphed 112-102 at Staples Center on the NBA's opening night, Kawhi Leonard starring with a game-high 30 points.

Davis made an impact – he had 25 points, 10 rebounds and five assists in a 37-minute outing - but is aware the team has adjustments to make ahead of Friday's home game against the Utah Jazz.

The six-time All-Star was disappointed with the Lakers' defensive effort as they surrendered 40 points in the second quarter and knew that their bench being outscored 60-19 was significant.

Davis is also aware it will take time for him and James to gel perfectly in the star-studded Lakers lineup, which saw Danny Green score 28 points in his first outing for the team.

"For us, we're both aggressive," Davis said of playing with James.

"Sometimes we kind of miss each other. I missed him a couple of times and he missed me, so just trying to figure it out.

"We know we are going draw a double team, [so it is about] knowing where everyone else is. When you have two guys who are passers it makes it a little bit easier but we're still learning.

"This is game one of many. We're all gonna look at the film and see where we could get better. We made some good plays but the defense we definitely have to clean up and get better at.

"When we started doing what we were supposed to do defensively we got back in the game and tied it up, then we had some costly turnovers at the wrong time of the game."

Davis added: "They had over 50 points off the bench. If we allow that, we deserve to be beat.

"Obviously [injured] Kyle Kuzma would help. He's very talented and able to score. But we just missed a couple of shots, Quinn [Cook] missed a couple.

"It's the first game, we are not down or upset. We stand level headed, go into the next game, will figure out what we can do better and make some adjustments against Utah."

Of his first game as a Laker, Davis added: "It felt good to be out there. Trying to get it going.

"It's been a while since I played in a game so it was fun for me to get back out on the floor with my team-mates. We obviously don't like the outcome but we're going have a chance to get better.

"It was a very anticipated game and a great atmosphere. First quarter it definitely felt like a playoff game."