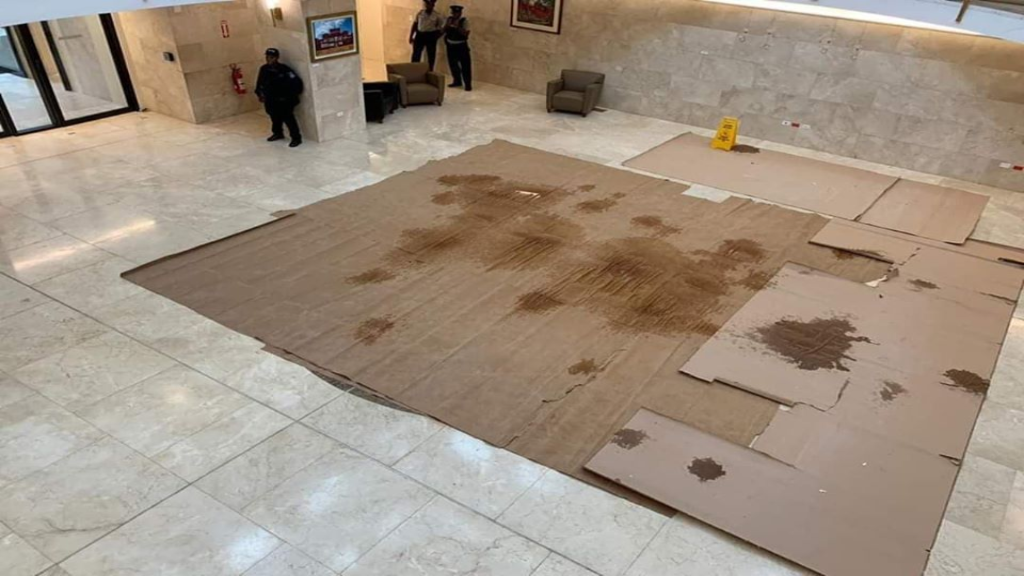 The roof of the recently reopened Red House has sprung a leak.

Heavy rains on Tuesday afternoon exposed a leak in the area over the rotunda.

Photos of cardboard laid out on the floor of the rotunda were shared on social media.

Political activist Phillip Edward Alexander criticised the reported leak, calling it a “failed 20 million dollar red house roof” as he took a jab at the Prime Minister and questioned how many millions more had to be spent to “make a roof work like a roof”.

Alexander, along with a group of people protested outside the Red House on the day of its reopening, where he questioned how almost half a billion dollars could be spent on restoration works but the roof appeared to be "still rusting".

UDeCOTT, a project partner on the restoration of the historic building said the matter is being addressed by the contractor.

It noted that the leak was caused by a broken rubber seal on the aluminum flashing in the skylight over the rotunda, which produced a leak with today’s rainfall.

UDeCOTT said the matter is being rectified by the contractor, as it falls within the defects liability period of one year and will be repaired at no additional cost to taxpayers.

According to a statement of works from UDeCOTT detailing the breakdown of costs on the Red House project, roofing and associated carpentry works were carried out by Construction Services and Supplies Limited at a cost of $20,114,497.39.

The Red House was completed at a grand total of $441 million and reopened last Friday.