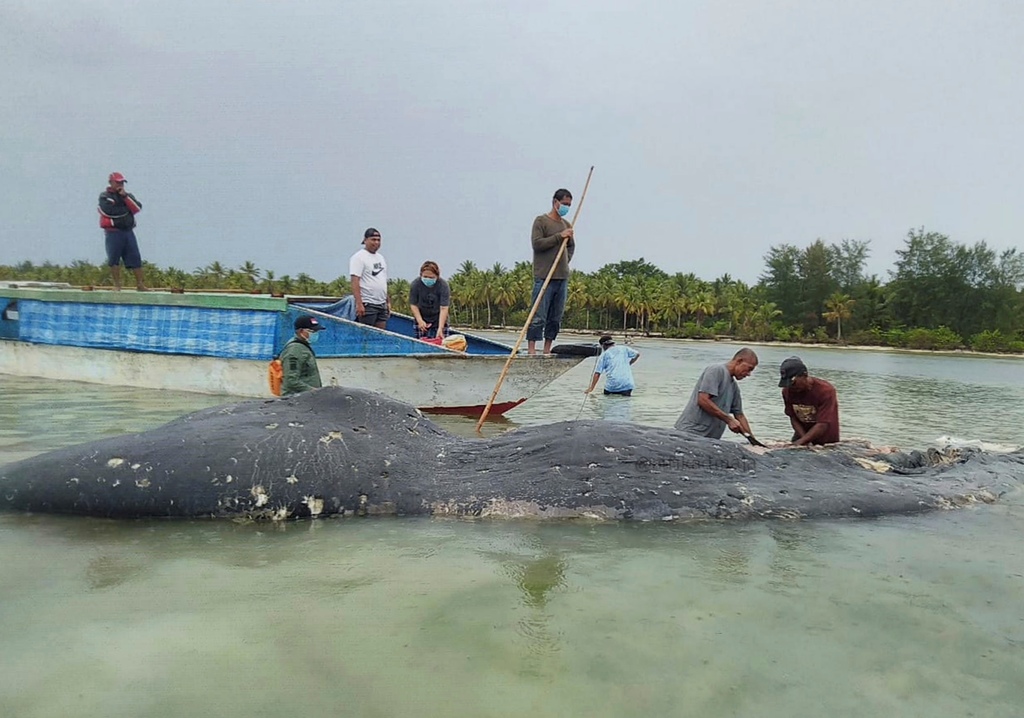 A dead whale that washed ashore in eastern Indonesia had a large lump of plastic waste in its stomach, including drinking cups and flip-flops, a park official said Tuesday, causing concern among environmentalists and government officials in one of the world's largest plastic polluting countries.

Rescuers from Wakatobi National Park found the rotting carcass of the 9.5-meter (31-foot) sperm whale late Monday near the park in Southeast Sulawesi province after receiving a report from environmentalists that villagers had surrounded the dead whale and were beginning to butcher the rotting carcass, park chief Heri Santoso said.

"Although we have not been able to deduce the cause of death, the facts that we see are truly awful," said Dwi Suprapti, a marine species conservation coordinator at WWF Indonesia.

She said it was not possible to determine if the plastic had caused the whale's death because of the animal's advanced state of decay.

Indonesia, an archipelago of 260 million people, is the world's second-largest plastic polluter after China, according to a study published in the journal Science in January. It produces 3.2 million tons of mismanaged plastic waste a year, of which 1.29 million tons ends up in the ocean, the study said.

Luhut Binsar Pandjaitan, Indonesia's coordinating minister of maritime affairs, said the whale's discovery should raise public awareness about the need to reduce plastic use, and had spurred the government to take tougher measures to protect the ocean.

"I'm so sad to hear this," said Pandjaitan, who recently has campaigned for less use of plastic. "It is possible that many other marine animals are also contaminated with plastic waste and this is very dangerous for our lives."

He said the government is making efforts to reduce the use of plastic, including urging shops not to provide plastic bags for customers and teaching about the problem in schools nationwide to meet a government target of reducing plastic use by 70 percent by 2025.

"This big ambition can be achieved if people learn to understand that plastic waste is a common enemy," he told The Associated Press.

Belize set to ban single use plastics, Styrofoam by April 2019