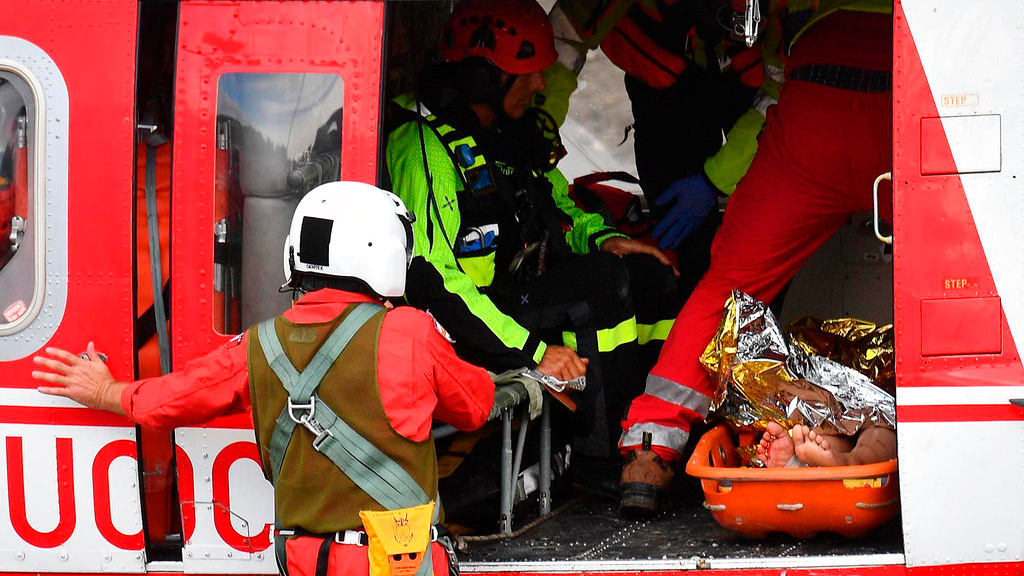 Italian emergency workers pulled two more bodies out of tons of broken concrete and twisted steel Wednesday after a highway bridge collapsed in Genoa, raising the death toll in the disaster to at least 39 people.

The collapse of the Morandi Bridge sent dozens of cars and three trucks plunging as much as 45 meters (150 feet) to the ground Tuesday as many Italian families were on the road ahead of Wednesday's major summer holiday. The collapse took place after a violent storm.

Working with heavy equipment, rescuers climbed over concrete slabs with sniffer dogs all through the night and into the day, searching for survivors or bodies. Borrelli said 1,000 of them were at the scene.

Investigators, meanwhile, were working to determine what caused an 80-meter (260-foot) long stretch of highway to break off from the 45-meter (150-foot) high bridge in the northwestern port city.

Italian politicians, for their part, were trying to find who to blame for the deadly tragedy.

The 1967 bridge, considered innovative in its time for its use of concrete around its cables, was long due for an upgrade, especially since the structure was more heavily trafficked than its designers had envisioned. One expert in such construction, Antonio Brencich at the University of Genoa, had previously called the bridge "a failure of engineering."

An unidentified woman who was standing below the bridge told RAI state TV that it crumbled Tuesday as if it were a mound of baking flour.

Engineering experts, noting that the bridge was 51 years old, said corrosion and weather could have been factors in its collapse.

The Italian CNR civil engineering society said structures dating from when the Morandi Bridge was built had surpassed their lifespan. It called for a "Marshall Plan" to repair or replace tens of thousands of Italian bridges and viaducts built in the 1950s and 1960s. It said that simply updating or reinforcing the bridges would be more expensive than destroying and rebuilding them with new technology.

Mehdi Kashani, an associate professor in structural mechanics at the University of Southampton in the U.K., said pressure from "dynamic loads," such as heavy traffic or strong winds, could have resulted in "fatigue damage" in the bridge's parts.

Italy's minister of transportation and infrastructure, Danilo Toninelli, said there was a plan pending to spend 20 million euro ($22.7 million) on bids for significant safety work on the bridge.

While the collapse's cause is yet to be determined, political bickering moved into high gear Wednesday.

Toninelli, from the populist 5-Star Movement, threatened in a Facebook post that the state, if necessary, would take direct control of the highway contractor responsible for the bridge if it couldn't properly care for the roads and bridges it was responsible for.

State radio reported Wednesday that some 5-Star lawmakers in 2013 had questioned the wisdom of an ambitious, expensive infrastructure overhaul program as possibly wasteful, but that a post about that on the Movement's site was removed Tuesday after the bridge's collapse.

Within hours after the collapse, Salvini was trying to shift the blame away from Italy's new populist government, vowing not to let European Union spending strictures on Italy, which is laden with public debt, stop any effort to make the country's infrastructure safe.

Genoa is a flood-prone city, and officials were warning that the debris from the collapse must be removed as soon as possible. Some of the wreckage landed in a dry riverbed that could flood when the rainy season resumes in a few weeks.

At the Vatican, Pope Francis led prayers Wednesday for the victims of the Genoa bridge collapse.

Speaking to the faithful in St. Peter's Square, Francis expressed his "spiritual closeness" to the victims, the injured and their families, and the hundreds of local people who were forced to evacuate their homes in the area.