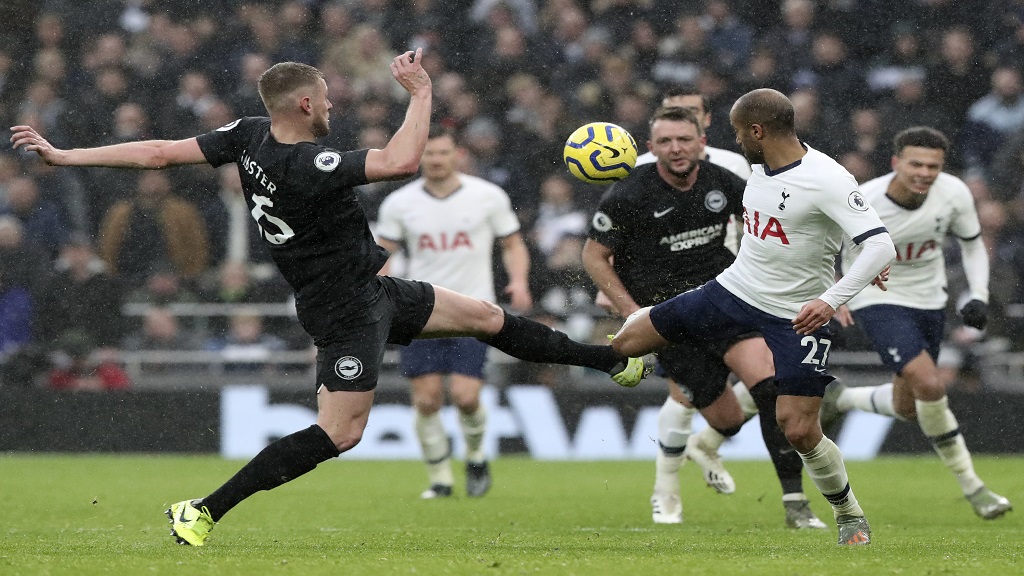 Jose Mourinho's men lost 2-0 against Chelsea on Sunday and were again below par as they fell behind to Brighton at the Tottenham Hotspur Stadium before fighting back.

Adam Webster profited from some slack defending to give Brighton a first-half lead, 13 minutes after Kane had a strike marginally ruled out for offside.

The England striker equalised early in the second half to continue his fine Boxing Day record, however, and compatriot Alli produced a deft winner 18 minutes from time to revive Tottenham's top-four aspirations.

Kane got on the end of Harry Winks' searching pass and tucked the ball past Mat Ryan, only for VAR to intervene and adjudge the striker was marginally offside.

That looked like being a big moment in the match as Webster - also on target against Arsenal in Brighton's most recent win - climbed highest to head home Pascal Gross' free-kick.

Aaron Connolly - who scored twice in Brighton's 3-0 win over Spurs in October - made a mess of a glorious chance after 49 minutes, the youngster guiding Bernardo's cross wide from close range as Spurs struggled for momentum.

From pretty much out of nowhere, though, Kane found a way past Ryan at the second time of asking to level things up after his first shot was repelled.

Tottenham pushed for a winner and found one through Alli, who lifted a first-time finish over Ryan after being teed up by Serge Aurier's knock-back in a move started by substitute Christian Eriksen.

What does it mean? Tottenham regain momentum

After losing ground on the Champions League spots with last weekend's defeat to fourth-place Chelsea, anything less than victory would have been seen as a huge setback for Tottenham.

Brighton won the reverse fixture comfortably and again for a while seemed to have their opponents' number here, but Mourinho's side managed to show a couple of moments of quality to pick up a win that moves them to within three points of Chelsea, who play Southampton in their game in hand later on Thursday.

Having already had a goal ruled out, Kane stuck with the task and was rewarded with his equaliser early in the second half.

He has now scored eight goals in five Premier League games on Boxing Day - only Robbie Fowler (9) has scored more on December 26.

Webster's opener made it 15 goals conceded by Tottenham in nine matches under Mourinho in all competitions - more than any other Premier League team in that period.

The centre-back now has three top-flight goals for the campaign, none easier than this one as he simply climbed higher than Toby Alderweireld to head in.

Tottenham are back in Premier League action with a trip to Norwich City on Saturday, the same day that Brighton host Bournemouth.