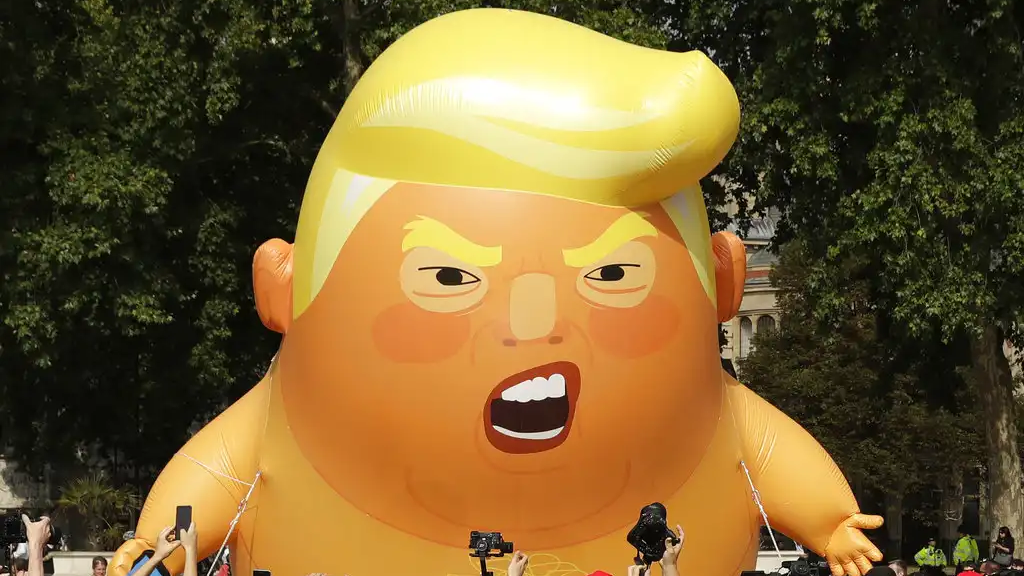 A six-meter high cartoon baby blimp of U.S. President Donald Trump is flown as a protest against his visit, in Parliament Square in London, England, Friday, July 13, 2018. (AP Photo/Matt Dunham)

A giant balloon depicting U.S. President Donald Trump as a screaming orange baby flew over London Friday as tens of thousands marched through the streets to protest the American leader's visit to the U.K.

The diaper-clad infant, with a quiff of hair and a mobile phone for tweeting, was the centrepiece of demonstrations protesting Trump's policies on issues ranging from immigration and race relations to women and climate change.

"Depicting Trump as a baby is a great way of targeting his fragile ego, and mocking him is our main motivation," said Matthew Bonner, one of the organisers. "He doesn't seem to be affected by the moral outrage that comes from his behaviour and his policies. You can't reason with him but you can ridicule him."

Anger over Trump's visit has already had consequences. Just a week after Trump's inauguration, Prime Minister Theresa May invited the president for a state visit, the type of event that normally includes glittering horse-drawn carriages and a state dinner hosted by the monarch. That morphed into this two-day "working visit" with much less pomp and circumstance amid concern about security and crowds in central London.

Protest organisers say they plan to stage demonstrations in some 50 cities around the U.K.

"We hope that wherever Donald Trump goes, he hears and sees the strength of a British opinion that rejects not just him as a person and however distasteful he is as a person, but the policies and politics that he represents," said Asad Rehman, organiser of UK Protests Against Trump's Visit.

Phil Bond, 65, a musician, said that he knows that it is unlikely that the demonstrations will make any difference to the president, but he believes people in the United States will notice. He said he just wants to add "my little drop of water to the 50 gallons."

Not everyone was protesting against Trump, however.

Augustine Chukwuma Obodo, who wore a "Make America Great Again! hat and a Trump for president in 2020 shirt, said he wanted to make clear that not everyone found the protest amusing. He said he wanted to add his voice to those who are quieter, but believe Trump is doing a good job on issues such as pushing NATO members to pay more.

"America is not a cashpoint," he said.

A march in support of Trump will start at the U.S. Embassy on the south bank of the River Thames and end near the prime minister's residence at Downing Street on Saturday.

Trump, in an interview with Britain's Sun newspaper, criticised London Mayor Sadiq Khan, saying he had not been "hospitable" to the U.S. government. Khan refused to block the Trump baby balloon.

"I guess when they put out blimps to make me feel unwelcome, no reason for me to go to London," Trump said in an interview published Friday.

Khan, who has often been a target of Trump's ire, backed the protests but said those who want to cause trouble are not welcome.

"The U.S. has always stood by our side as a beacon for tolerance, openness and respect. This protest is not anti-American - far from it. Most of those marching on Friday will love the United States, just as I do," Khan said. "But having a special relationship means that we expect the highest standards from each other, and it also means speaking out when we think the values we hold dear are under threat."

After his meetings in and around London, Trump will fly north for a round of golf at his Turnberry resort in Scotland.

That won't help him escape protesters who have scheduled demonstrations outside the golf course, as well as George Square in Glasgow and near the U.S. consulate in Edinburgh.