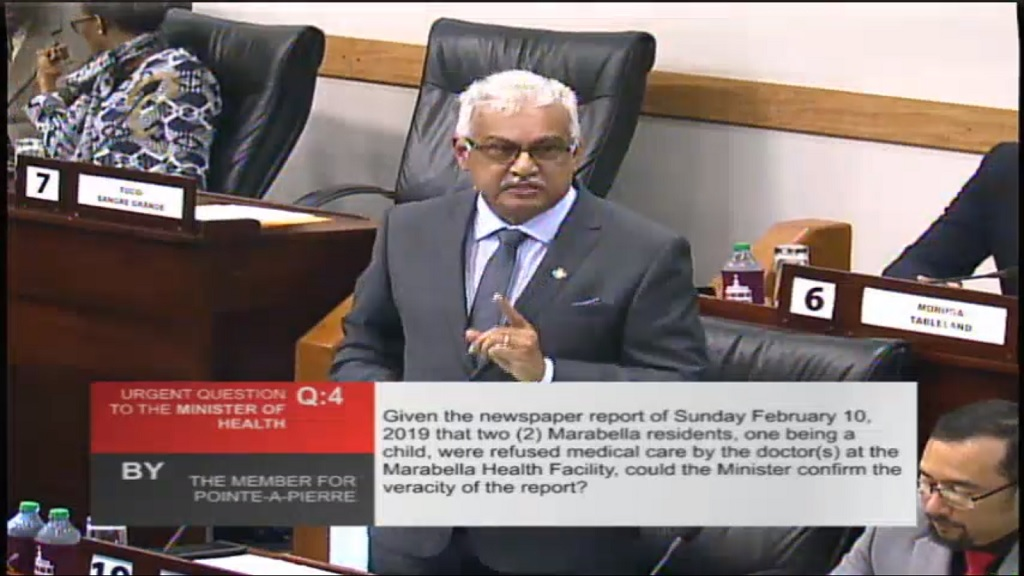 Health Minister Terrence Deyalsingh spoke out vehemently against the treatment of a baby and mother at the Marabella Health Center who were turned away because a doctor said it was too close to closing time.

Speaking in Parliament in response to an urgent question on the veracity of the report, Deyalsingh said that incident was ‘unacceptable’.

“In this particular case, Mr Speaker I will not and cannot defend the indefensible. The standard of care provided at the Marabella Health Facility, in this case, left a lot to be desired. A clerk took it upon him- or herself to not refer the patient to a nurse or doctor for triage (examination and referral for treatment). I personally condemn that action.”

Deyalsingh said the staff at that facility have been interviewed and a full report on the incident was sent to the CEO of the South West Regional Health Authority (SWRHA) on Friday.

“I have communicated to the Board and the CEO that this is unacceptable and they are to take whatever action they deem possible for following proper industrial relations practices and due process,” he said.

Deyalsingh clarified that the clerk did not do the triage but ‘took it upon himself’ not to refer the family to a doctor for triage.

He said the Board will be taking the necessary action following due process.

Media reported that on February 8, 2019, Marabella mother Sunita Balgobin and her 13-month-old son were turned away from the Marabella Health Centre because a health worker said the Centre was about to close.

Balgobin said she was berated by nursing staff and was forced to leave the Centre without her son seeing a doctor.

Citizens have called for the staff member/s responsible to be fired.