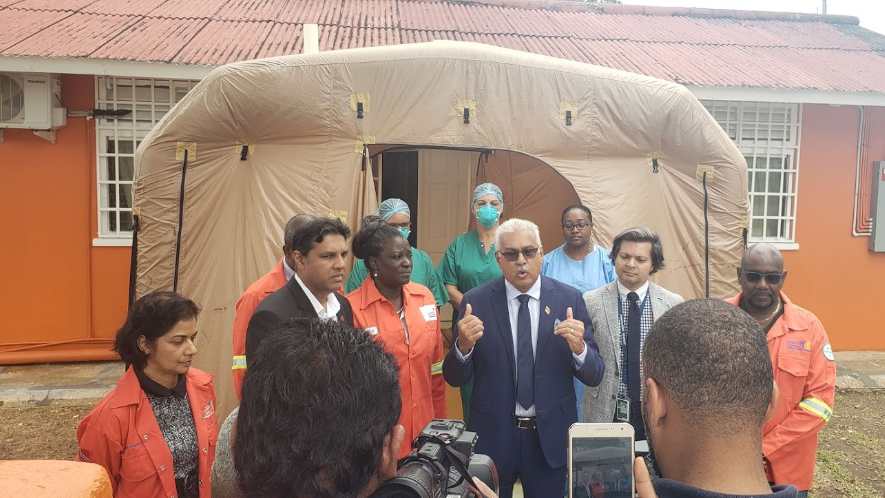 Flashback: Health Minister Terrence Deyalsingh addresses media on a tour of quarantine facilities at the Caura Hospital on February 7, 2020. Photo by Darlisa Ghouralal.

Health Minister Terrence Deyalsingh is assuring that there are no cases of the deadly coronavirus (Covid-19) in T&T.

Deyalsingh gave the assurance on Tuesday while speaking with reporters following the Central Block relocation ceremony at the St James Medical Centre.

Deyalsingh said claims that a patient at the San Fernando General Hospital (SFGH) had tested positive for the virus were completely false.

On Saturday, the South-West Regional Health Authority (SWRHA) advised that a patient was placed in isolation after exhibiting symptoms of a respiratory illness, including fever and shortness of breath.

However, the SWRHA said the patient’s travel history showed no indication of travel to China prior to the onset of illness.

“There was one person who went to San Fernando on Saturday complaining of flu-like symptoms," Deyalsingh said on Tuesday.

He said people began to panic, however, samples were sent for testing and the results received on Sunday confirmed that the patient was not infected with the coronavirus.

Deyalsingh added that rumours of a ship in Pt Lisas with three dead Chinese nationals were also false.

Despite the "panic", the Health Minister said T&T is prepared and has put measures in place to deal with a any public health threat.

This includes travel restrictions and isolation facilities at the Caura hospital and a building that previously housed the College of Science Technology and Applied Arts of Trinidad and Tobago (COSTAATT).

“To show you how forward-thinking we were in designing this facility, you have two isolation rooms," he said.

"This was conceived and designed into it even before the world even knew what the coronavirus was because we knew in new facilities you had to build isolation capacity. So we are ramping up our isolation capacity to deal with new infectious diseases."

Deyalsingh said the coronavirus was somewhat expected as new viruses tend to come up every two or three years.

He said countries have to get used to managing and responding to new health threats.

As of Tuesday, the coronavirus had killed more than 1000 people and more than 42,000 infections have been confirmed, most in China.