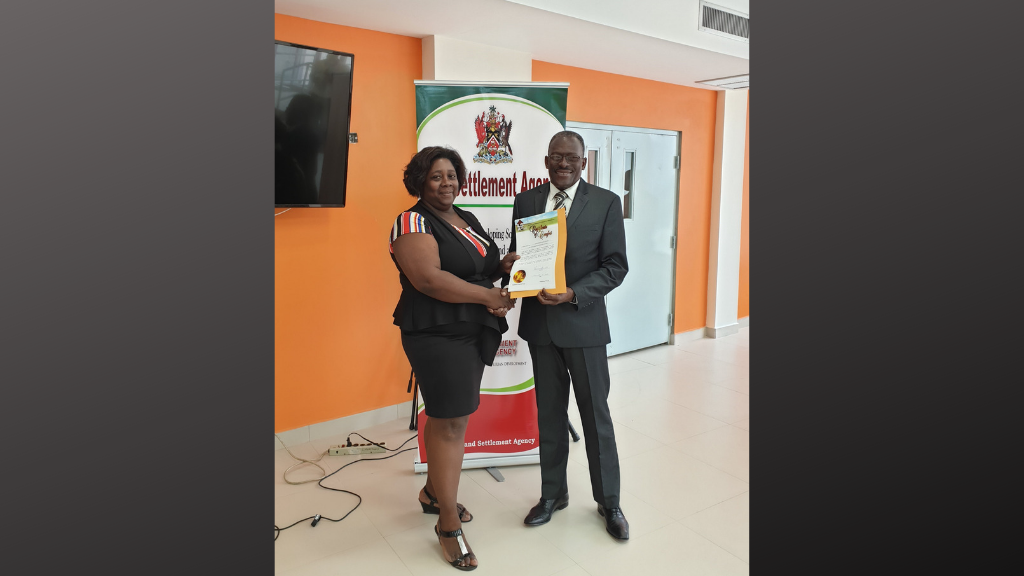 Forty–two Diego Martin residents are on their way to having their tenure regularised under the Squatter Regularization Programme, after receiving Certificates of Comfort (CoCs) from the Land Settlement Agency (LSA).

The CoCs were presented to these deserving individuals at a distribution ceremony last Friday at the Diego Martin Sporting Complex, 31 Savannah Terrace, Corner of Diego Martin Main Road, Diego Martin.

While last Friday’s recipients were happy to receive their CoCs, LSA CEO Hazar Hosein explained that land settlement matters are quite lengthy because one has to ensure there are no limitations to the lands nor plans for its public use.

Housing Minister Edmund Dillon told the gathering, which included MPs Colm Imbert and Darryl Smith, that the Programme is one of the many the Ministry of Housing and Urban Development has implemented to assist low to lower middle income families in their quest for affordable housing solutions.

He assured that Government was about putting people first, stating that it considers them to be the country’s greatest asset and every policy, programme and initiative was designed to improve their standard of living.

A Certificate of Comfort issued by the Land Settlement Agency, is the first stage in a three-step process towards regularisation of tenure under the Squatter Regularization Programme.

The Minister, like many of the other speakers, reiterated to those present that the CoC was not a Deed and as such should not be sold, assigned or transferred to anyone else; nor was it a license to grab more land by extending the boundaries.

Following the CoC, the next stage is the issuance of a Statutory Lease which gives the holder a maximum of 30 years to pay for the land which will be sold at 25 percent the market value.  Once the lands have been paid for the beneficiaries will be eligible for Deeds of Lease for 199 years.

Recipients were encouraged to work with the LSA as they carry out topographical and cadastral surveys within their areas to speed up the process from CoC to Statutory Lease to Deed of Lease, which will give beneficiaries the opportunity to become landowners with all of the attendant rights. The process will also allow the LSA to determine what kind of infrastructural work is required in the area.

The Chairman of the Diego Martin Regional Corporation, area councilors and officials from the Ministry of Housing and Urban Development and the Land Settlement Agency were also in attendance at the distribution ceremony.