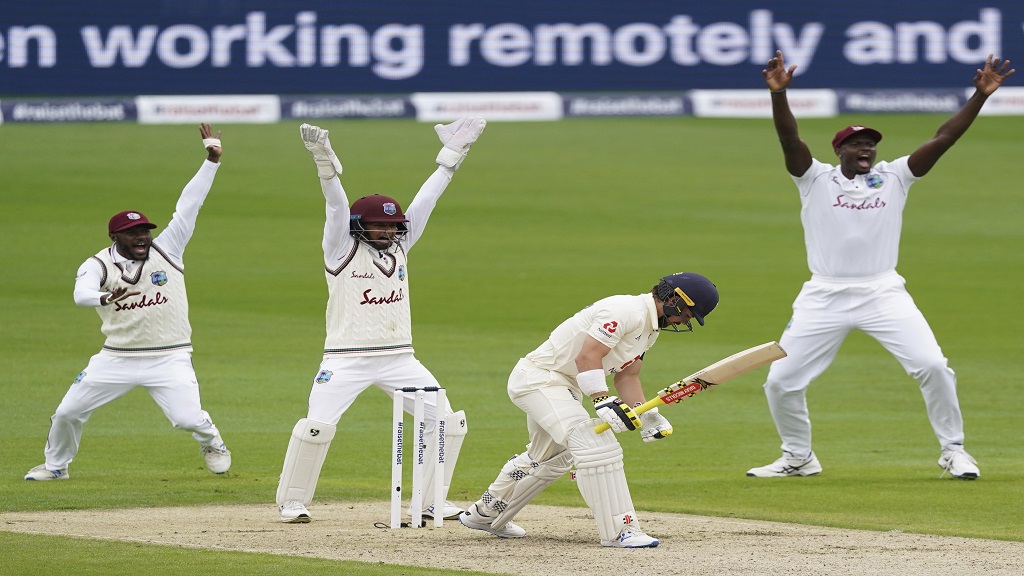 Dom Sibley and Ben Stokes made patient half-centuries to build a strong platform for England on an attritional day one of the second Test against West Indies at Old Trafford.

Returning England captain Joe Root was rocked by the news that he would have to do without Jofra Archer as his side attempt to level the three-match series after the paceman breached bio-secure protocols.

Roston Chase (2-53) took two wickets in as many balls either side after lunch to reduce England to 29-2 after Jason Holder won the toss and opted to bowl under grey skies following a delayed start.

Sibley (86 not out) and Stokes, unbeaten on 59, batted with great disciplined to make it England's day in Manchester, putting on an unbroken 126 to leave Root's side 207-3 at stumps.

Holder dropped Sibley on 68, but the opener deserved that stroke of luck after showing great application to frustrate the Windies, eyeing a first Test series win in England since 1988 after their victory in Southampton last week.

The Windies pacemen were wayward when play got underway 90 minutes late due to rain, but Chase trapped Rory Burns (15) leg before on the stroke of lunch in his first over.

Chase was on a hat-trick after lunch when Zak Crawley clipped the first ball he faced to Holder at leg slip, but Sibley and Root steadied the ship with a stand of 52.

Root trudged off after edging Alzarri Joseph to Holder at second slip, but Sibley continued to dig in and Stokes launched Chase for the first six of the series down the ground in a probing final over before tea, which England took on 112-3.

Sibley brought up a hard-earned half-century off 164 balls and had a life when he nicked Shannon Gabriel - returning after a spell off the field - to Holder, but the skipper put down a straightforward chance.

Gabriel got Holder in on the action again at second slip, but this time with a huge wide, and Stokes reverse-swept Chase for four before he had his 50 off 119 deliveries in a wicket-less final session.

The Warwickshire opener faced 253 balls and struck only four boundaries in a disciplined traditional Test match knock to close in on a second international hundred.

Stokes, captain in the absence of Root at the Rose Bowl, was also watchful and England - who recalled Stuart Broad, Chris Woakes and Sam Curran - will be hopeful of building on the foundations laid.

Chase shows Windies are not all about pace

Gabriel was man of the match in the first Test, but the Windies pacemen failed to make the impact Holder had in mind when he put England in on a gloomy first day.

They lacked control and did not show the threat they posed on the south coast, but Chase delivered when he has thrown the ball by Holder at the end of an hour-long first session.

The all-rounder hit Burns bang in front, the left-hander wasting a review, and saw the back of Crawley straight after lunch before generating turn without reward later in the day.

Windies fast bowler Joseph appears to have the measure of England captain Root.

When the returning skipper was tempted into an extravagant drive and edged to Holder it was the fourth time his last five Test knocks against the Windies he had been dismissed by Joseph.