DOHA 2019: Back on track after avoiding ban, Coleman fastest at worlds 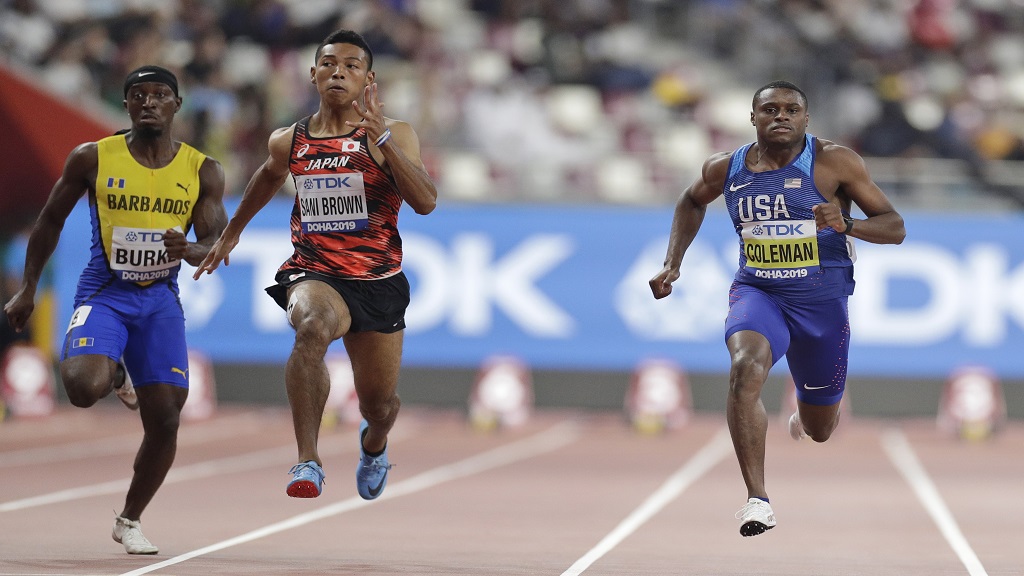 When the world track and field championships opened in the Middle East for the first time Friday, there were some noticeable absences: Usain Bolt, Caster Semenya, Russian flags and fans.

The 40,000-seat stadium — the first open-air venue of its kind with air conditioning — was cooling thousands of empty seats Friday night, many of them covered by enormous canvas signs.

Perhaps more tickets would have been sold if Usain Bolt, the sport's most charismatic figure who has been at every world championships since 2003, had not retired after the 2017 event. His absence opens the door for American sprinters Christian Coleman and Justin Gatlin, both tainted by doping cases. Gatlin's doping issues were from years ago, but Coleman had a case against him for missing tests dropped just two weeks ago because of a technicality. Both men cruised through heats in the 100 metres to qualify for the semifinals Saturday

Justin Gatlin of the U.S. crosses the finish line during the men's 100 metres heats.

Back on the track for the first time since news of the missed doping tests emerged, Coleman qualified fastest, starting strongly before slowing in the last 10 metres to finish in 9.98 seconds. Coleman moved silently past waiting media in Khalifa International Stadium, leaving Gatlin to talk about his rival's problems.

"I've had contact with him and had a relationship with him, way before he turned pro," Gatlin said. "When people are going through anything in life, you want to reach out to him."

Gatlin, 37, was suspended twice for doping violations. In 2017, he beat Bolt at worlds and was greeted with boos in London.

Reporters asked Gatlin what the event is like without his former rival's star power.

"Just say his name. It's cool," Gatlin said. "You treat him like Voldemort from Harry Potter."

That is how some are treating the 23-year-old Coleman after the three missed drug tests across a year.

"It completely disqualifies him, at this point, from ever being that face of the sport," said former world-record holder Michael Johnson, working in Doha for the BBC. "This will follow him, as it should."

Semenya is barred from these championships for failing to take drugs demanded by the IAAF to reduce her natural testosterone level. The women's 800-metre heats started without the woman who won gold at the last two Olympics and three world championships.

"The top two seeds before worlds aren't here. It definitely opens things up," said Ajee Wilson, the U.S. runner who is the strongest contender for the gold.

The fastest time across the six heats was just over 2 minutes by Winnie Nanyondo of Uganda, far off Semenya's personal best of 1:54.25.

The word "Russia" was also nowhere to be seen around the Doha stadium.

But the first of the 30 Russians entered as neutrals did take to the track after passing vetting of their drug-testing histories. They aren't allowed to use their flag or play their anthem.

High jumper Mariya Lasitskene, who won the world title in 2017 as a neutral, qualified for the final.

Russia's return to the sport is in doubt after the World Anti-Doping Agency said Monday it was investigating whether evidence of past doping cases handed over by Moscow had been doctored.

"We're still hoping for something better," Lasitskene said, "that it will somehow get sorted."

The heat affected one runner in the 5,000 meters, as Jonathan Busby of Aruba struggled to finish well behind the leaders. Braima Suncar Dabo of Guinea-Bissau stopped his own race to help Busby cross the line. 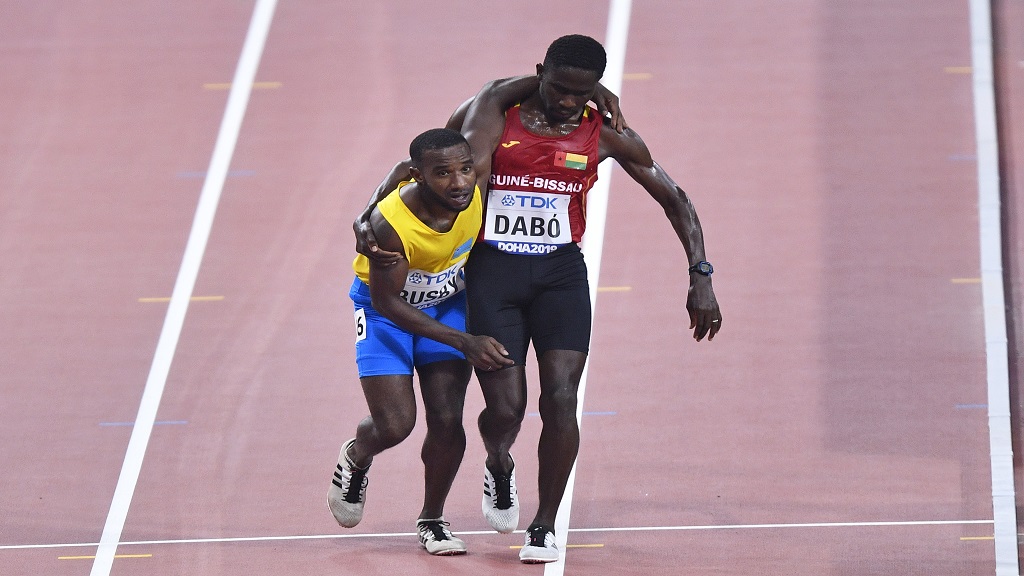 Braima Suncar Dabo of Guinea Bissau carries Jonathan Busby of Aruba to the finish line during the men's 5,000 metre heats.

The air conditioning kept the track about 20 degrees cooler than in the city — cooled by vents that were switched off at ground level during competitions to avoid impacting performances.

"The tricky part is going into a really hot climate into the stadium where it's cooler," Gatlin said. "It's going to be playing tricks on your muscles."

The marathon runners will have no such cooling technology to assist them on the steamy streets of Doha. Easing the conditions only comes in the form of starting the races around midnight, starting Friday with the female runners. The forecast for the midnight race through downtown Doha was 89 (31.6 C).