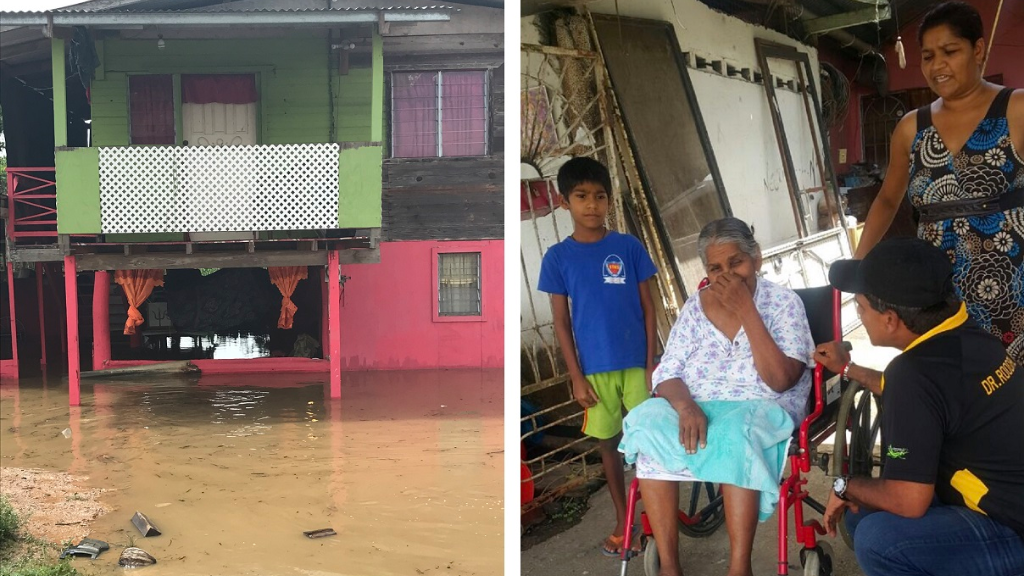 (Photo: Dr Roodal Moonilal consoles 75-year-old Jasso Sookdeo of Suchit Trace who was forced to evacuate her home in the aftermath of the storm.)

Opposition MP Dr Roodal Moonilal is calling on Government to provide emergency funding to flood victims, including registered farmers whose crops have been destroyed by the effects of tropical storm Bret.

In a statement, Dr Moonilal suggested that CEPEP resources could be used to assist with nationwide clean-up operations, which he said is well-placed to provide this assistance.

"In light of the on-going disaster caused by Tropical Storm Bret, CEPEP resources should be assigned to assist in clearing clogged water courses, removing debris, cleaning affected homes and undertaking other essential and urgent duties," he said.

He added that Government should immediately reposition the required number of CEPEP contractors away from their routine functions and into hard-hit communities where distressed residents are struggling with the aftermath of the storm.

"The widespread damage wrought by the storm requires extensive clean-up, repair and remedial work, and CEPEP is well-placed to provide such assistance. I urge the Government to immediately reassign such resources on a needs basis," he said.

He is also calling on the Government to provide emergency funding to registered farmers who have had their crops wrecked by the impact of the storm.

The livelihood of hundreds of farmers has been ruined by the massive floods, falling trees and blocked watercourses. The accumulated losses to the farming community will amount to millions of dollars. This is also likely to lead to a short supply of vegetables, fruits and other agricultural produce, which could result in increased retail prices to consumers," he said.

He said Government should immediately intervene with the farming community and provide emergency funds and technical and other assistance.

"I call upon the Government to be proactive with respect to these urgent matters in order to seek to minimise the damaging and costly impact of the destructive storm," Dr Moonilal said.

Homes throughout parts of Central, East and South Trinidad were affected by the storm after some rivers, such as the Guanapo and Carapo Rivers, burst their banks. The ODPM has been monitoring the Caroni River which was also said to be at high levels.

Villagers in Carapo and Tabaquite were marooned by flood waters, while parts of South Trinidad, including Moruga and Penal, were also damaged by flooding.

The Office of Disaster and Preparedness Management (ODPM) along with regional corporations and the Ministry of Works and Transport has begun to tackle clean-up operations.