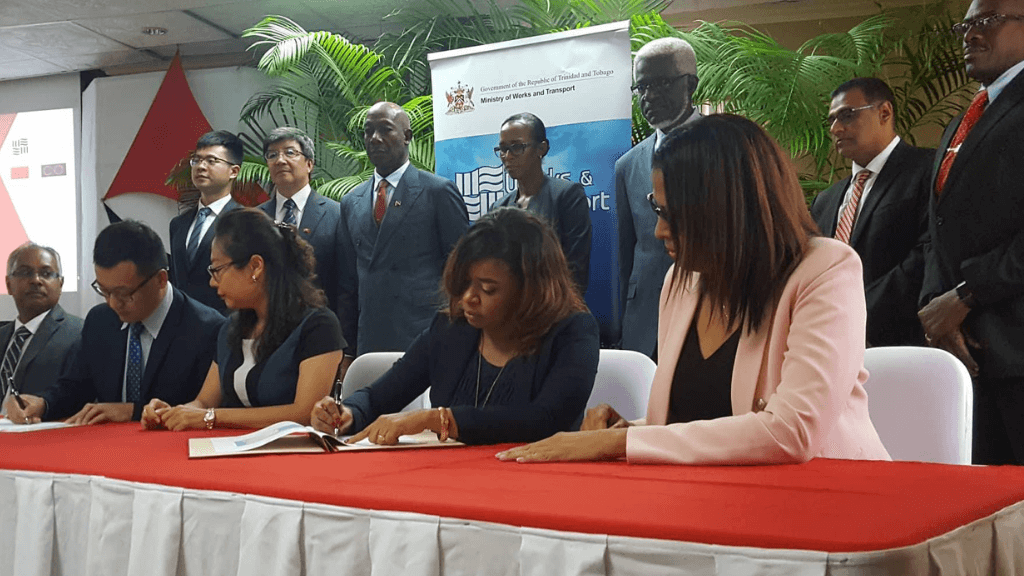 The cooperation agreement for the development of a dry docking facility in La Brea is signed by representatives of the China Harbour Engineering Company Limited Dr Zhimin Hu and Xuewu Gao and Thomas Lynch Coroare, Secretary, NIDCO, and Esther Farmer, President, NIDCO as Government ministers look on. Photo: Darlisa Ghouralal.

A dry dock facility in La Brea, when developed, will create as many as 5000 jobs which can assist in the employment of former Petrotrin workers when the Pointe-a-Pierre refinery is decommissioned.

Speaking at the signing ceremony for the development of the facility on Friday, Prime Minister Dr Keith Rowley said the timing of the project is not accidental as this is exactly what the country needs at this time.

The project is being executed by the National Infrastructure Development Company (NIDCO) on behalf of the Government with China Harbour Engineering Company Limited (CHEC).

Rowley said both the Premier and the President of China gave their commitment to support Trinidad and Tobago in this endeavour when he visited the country along with a delegation some months ago.

He said the project has huge foreign currency earning potential, an additional benefit to Trinidad and Tobago.

He said La Brea is the perfect location for the facility as the area offers a number of skills needed in such a business.

“When ships come in for dry docking, there’s a whole range of services from welding, to blasting, to engineering, electrical works, to all kind of skills.”

Rowley said he had no doubt in his mind that a large number of former refinery workers would find themselves employed at facility.

He added that this is just one of the projects Government will undertake in La Brea in the near future.

The Prime Minister said the project will have other knock-on effects, including increased opportunities for housing construction in the area.

The community of La Brea will see a face change for the better."

The project and others like this, is expected to bring a number of opportunities for growth for the La Brea community.

No cost has yet been set for the construction of the facility.