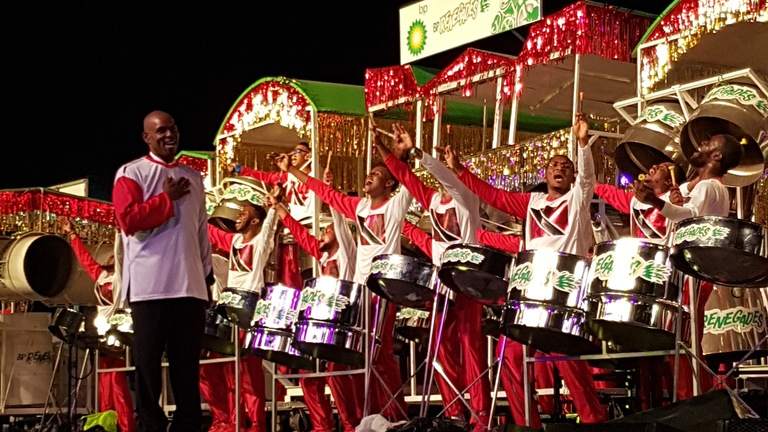 Duvone Stewart guided bpTT Renegades to its second consecutive victory on Saturday night at the Panorama finals taking their winning tally to 11.

Duvone Stewart says when it comes to Panorama, he aims to create a show that could resonate with people all over the world.

The arranger, who has copped three Panorama titles this year, winning the Panorama titles in the Large, Medium and Small band categories, told Loop that the art form should live on in the hearts and minds of people.

BpTT Renegades, which retained its Panorama title from last year, started with a skit with a woman accusing Stewart of neglecting her for pan.

It ended with them getting married on stage with the band incorporating the wedding song into its arrangement.

The presentation was complete with fireworks, pyrotechnic displays and confetti, which were a common feature during the Panorama finals.

“The strategy behind doing what I did…God created five senses for the human being to go about, seeing and smelling but I took it to a deeper sense where I wanted the blind to see and deaf to hear with whatever musical contribution I had to deliver to the public and that was the defining factor in Duvone Stewart winning three categories,” said Stewart.

“For me, I saw it (Panorama) becoming a monotonous production where you push a band on stage, play and come off. This art form is supposed to be a masterful piece of artwork... something that could live on in the hearts and minds of people. We need to produce this in a way that attracts people in Ohio, Dakota, Slovenia and Austria. There are places that don’t know our instrument exists so what I am doing holistically is to sell this artform to these countries,” he said, calling on Trinbagonians must respect the instrument and the culture.

The 42-year-old Tobagonian arranger said his Panorama season was an emotional, happy and successful season especially since he paid tribute to the greats who passed away last year: Ken ‘Professor’ Philmore, De Fosto and Shadow.

Pan Elders, based in San Fernando, topped all comers with Stewart's arrangement of 'The Will’.

“The Will is a message left by somebody who passed and gone and I did it in full for Ken ‘Professor’ Philmore, De Fosto and Shadow. These guys paved the way for me today and I am in Panorama to make my voice be heard,” he said.

Below are the complete results for Panorama 2019