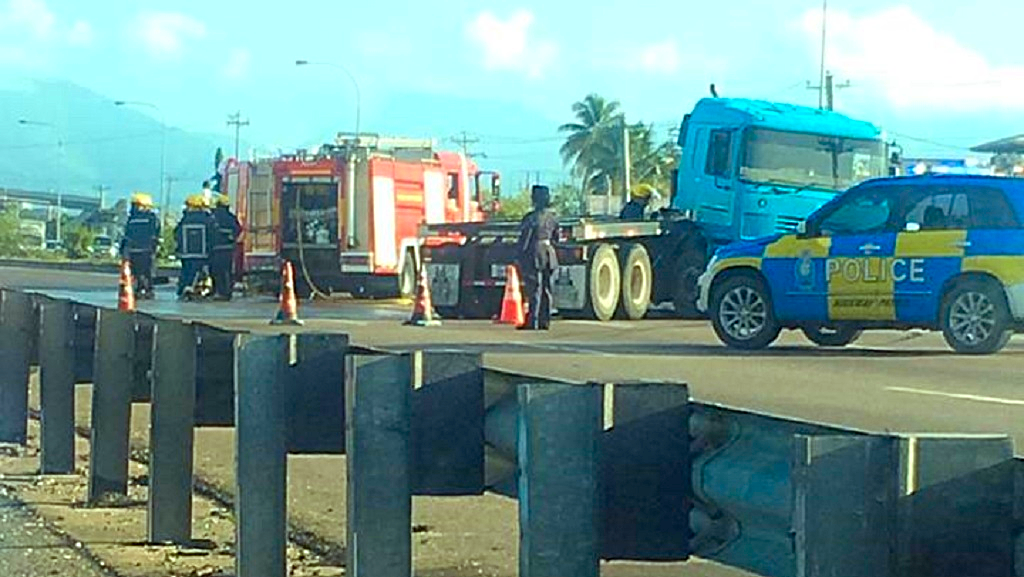 Drivers were caught in traffic near Charlieville on Thursday morning after an accident involving a truck took place along the Uriah Butler Highway.

Video footage showed the truck lying along two lanes of the northbound lane of the highway just before 6:00 am.

According to unconfirmed reports, the truck appeared to have collided with the median.

Some drivers also said there was diesel along the roadway which posed a hazard, however subsequent footage showed sand scattered along the highway to prevent any incidents.

Drivers said traffic was directed along alternative routes while efforts were made to remove the truck.

Drivers are advised to seek alternative routes until the roadway has been cleared.

The Trinidad and Tobago Police Service (TTPS) said there has been a 26 percent increase in road fatalities for 2019, compared to the same period last year.

Assistant Commissioner of Police (Ag.) Mobile, Joanne Archie, said the TTPS will be stepping up its campaign to reduce these incidents.

“We at the Trinidad & Tobago Police Service are very concerned and disappointed by this upward trend as many of these incidents are preventable if persons would exercise greater caution on the nation’s roads by simply obeying the road traffic rules and regulations.”

For this year, over 42,710 traffic tickets were issued to drivers of which 16,435 were for exceeding the legal speed limits and 1,589 drivers were arrested for Driving Under the Influence (DUI) offences.

Archie said this suggests that many drivers are still taking unnecessary chances on the roads and placing both themselves and the lives of other road users at risk.

She revealed that from next week the TTPS Traffic and Highway Patrol Branch under the command of Snr. Supt. Sharon Gomez-Cooper will be commencing an aggressive high-visibility and traffic enforcement campaign with the deployment of some of the new motorcycles, which were provided to the TTPS People’s Republic of China.

Archie added that this together with other initiatives soon coming on stream, aim to raise the level of driver compliance with road traffic laws and improve safety on the roadways.