Earthquake rattles millions in the US amid coronavirus threat 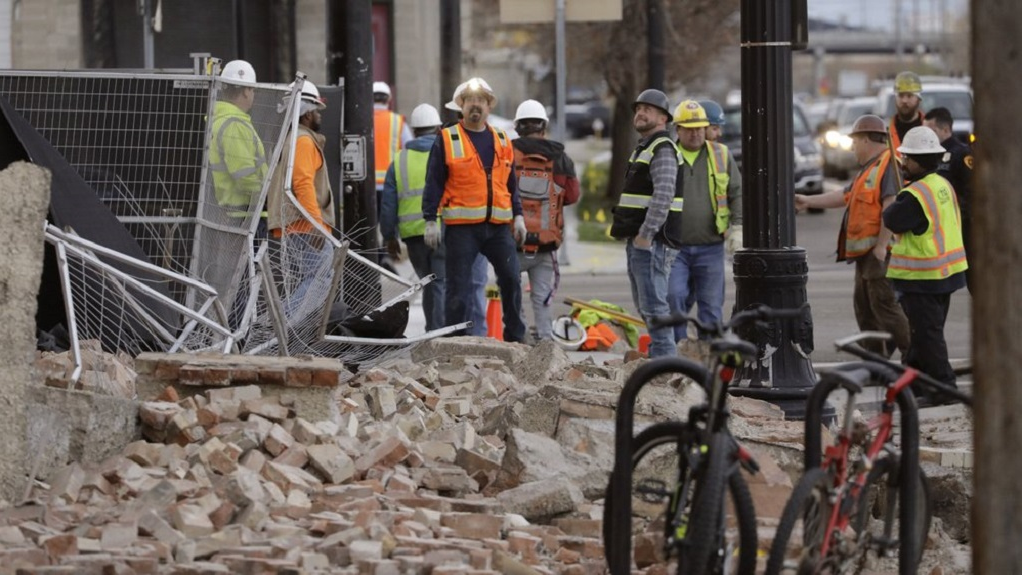 Construction workers looks at the rubble from a building after an earthquake Wednesday, March 18, 2020, in Salt Lake City. A 5.7-magnitude earthquake has shaken the city and many of its suburbs. The quake sent panicked residents running to the streets, knocked out power to tens of thousands of homes and closed the city's airport and its light rail system. (AP Photo/Rick Bowmer)

With much of normal life at a screeching halt to combat the coronavirus, millions of people in Utah are hunkered down in the safety of their homes.

But on Wednesday morning, even that protection felt fragile as an earthquake strong enough to shut down the airport tore through the Salt Lake City area.

Though no one was hurt, the magnitude 5.7 earthquake chipped away at an already thin sense of security.

Michelle Daneri, 30, emerged from her apartment for the first time in days to search for her frightened cat and questioned whether she can still rely on one of her last safe spaces.

"I hope there isn't lasting damage, because if I had to move at a time like this I don't know what I'd do," she said. Others reported books thrown from shelves, swinging chandeliers and fallen pottery.

About 100 other people were driven from buildings and homes by damage near the epicentre in Magna, a working-class suburb between the airport and Great Salt Lake west of the capital city.

A chemical plume was released at a nearby copper mine, and airplane passengers were temporarily stranded. Bricks showered onto sidewalks. The temblor shook the trumpet from the hand of a golden angel statute atop the iconic Salt Lake Temple of the state's predominant faith, The Church of Jesus Christ of Latter-day Saints.

About 2.8 million people felt the initial shaking that lasted up to 15 seconds, some running outside in panic, and aftershocks continued through the day. The effects rippled into neighbouring Colorado, Idaho, Wyoming and Nevada.

Marsha Guertzgen of Evanston, Wyoming, was about to board a flight in Salt Lake when the quake struck. "Pandemonium and chaos" immediately erupted, heightened by each aftershock, she said.

The airport was evacuated, a process made easier with the number of passengers down nearly 70% because of coronavirus-related travel restrictions, executive director Bill Wyatt said. The runways weren't damaged and flights resumed by late afternoon, after crews cleaned up a busted water main.

At the Kennecott copper mine, a broken tank leaked thousands of gallons of hydrochloric acid. But the chemical plume it sent into the air didn't reach past the sprawling mine site.

Homer Conder, a retired mechanical designer, felt the quake as he was drinking his coffee.

"I stood up to move, and it took me right off my feet," he said. "I narrowly missed getting hit in the head with a piece of pottery."

The coronavirus formed the backdrop to the earthquake response, as testing and a state hotline were interrupted and authorities pleaded with people to disclose any symptoms so crews could don protective gear when they went to help.

Though relatively moderate, the natural disaster likely made the "perception of safety feel even more elusive," said Emanuel Maidenberg, a clinical professor of psychiatry at the UCLA School of Medicine.

"It just amplifies the stress," Maidenberg said. "Everybody was stressed with the coronavirus, and then on top of it there is this new uncertain, unpredictable and pretty scary event that happens."

Limiting news and social media to a few times a day can help, he said. Instead, create a new routine that includes relaxing things like outdoor walks, reading or talking to friends by phone.

That's helped for Daneri, who works as a member coordinator for a nonprofit organization called American Conservation Experience.

"In this last week, I've talked to more friends that I haven't talked to in a long time," she said. "I feel like people are still trying to look out for each other even if they can't drop in on each other in person."