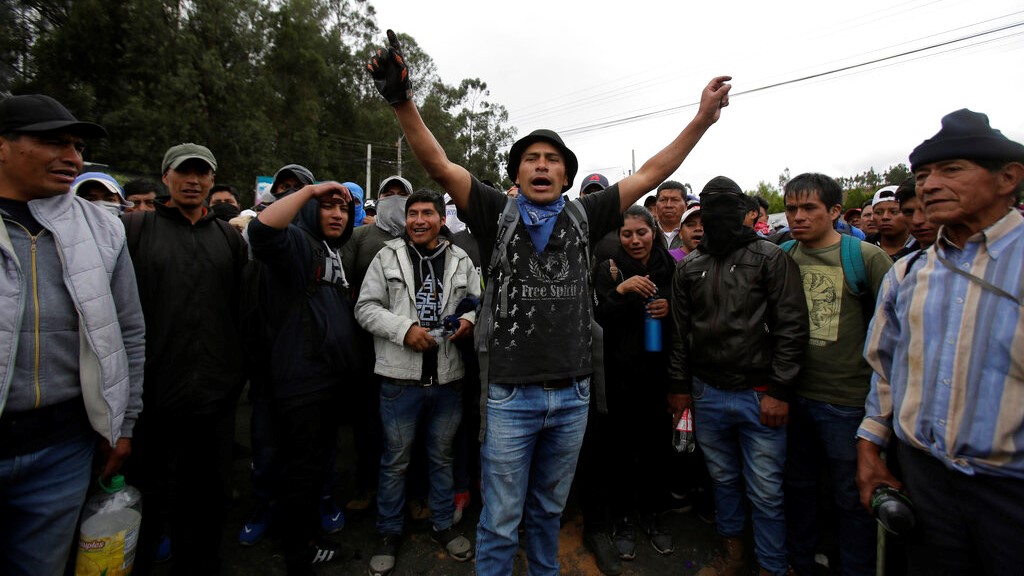 Residents block a main road during a transport strike that shut down taxi, bus and other services in response to a sudden rise in fuel prices, in Cangahua, Ecuador Friday, Oct. 4, 2019. (AP Photo/Dolores Ochoa)

Ecuadorian authorities dispatched military vehicles to ferry civilian passengers Friday and arrested several transport union leaders following a strike that shut down taxi, bus and other services in response to a rise in fuel prices.

The country's transport federations later announced the suspension of protest action, indicating an agreement may have been reached with the government. Details of the deal were not immediately announced, though there was speculation that it could involve passenger fare hikes and discounts for transport operators buying vehicles and spare parts.

President Lenín Moreno, who earlier declared a state of emergency over the strike, vowed Friday that he wouldn't back down on the decision to end costly fuel subsidies, which doubled the price of diesel overnight and sharply raised gasoline prices.


He said the subsidy has been harmful to the national economy, costing the state heavily for years.

"There will be a mechanism to alleviate the effects that (the end of the subsidy) could have on some sectors, of course," he said, "and we are ready to do that, but under no circumstances will we change the measure."

Earlier Friday, the streets of Quito were filled with people trekking to work on foot or seeking rides from friends and strangers as the strike entered a second day. Stone-throwing youths clashed with police using tear gas in parts of major cities, but there was far less violence than on Thursday.

The government said about 350 people had been detained for blocking traffic, interrupting public services or attacking police.

Moreno declared a state of emergency on Thursday to confront the strike and street clashes between protesters and police.

Moreno this week eliminated fuel subsidies in order to cope with budget problems. He also announced labour reforms and other measures meant to help stimulate the economy.