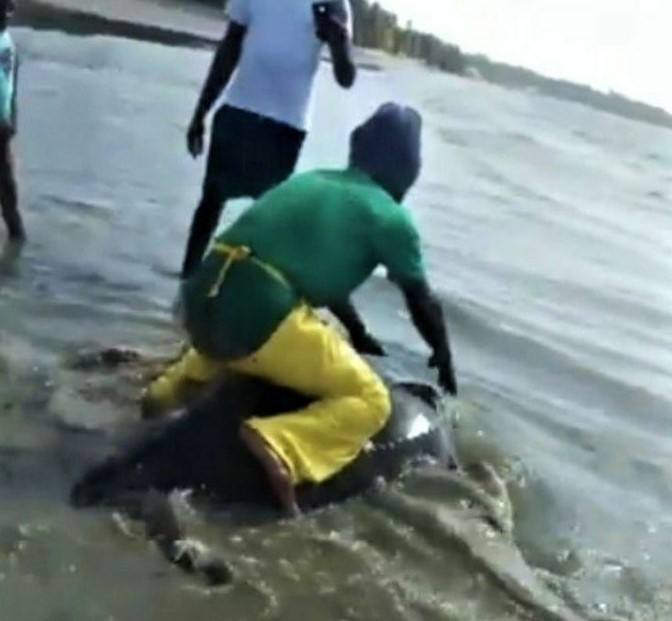 The Environmental Management Authority (EMA) is warning citizens that the ill-treatment of a leatherback turtle is liable to a fine of $100,000 and imprisonment for two years.

The EMA’s warning comes after a video surfaced on social media over the Easter weekend showing a few persons harassing a leatherback turtle attempting to return to sea.

In the 39 second video posted to Facebook by a concerned individual, several men are seen climbing on to the turtle’s back as the endangered species tries to return to sea.

Many social media users expressed outrage with many describing the incident as cruel.

Others called for urgent action to be taken against the perpetrators.

The EMA in a statement on Tuesday said it strongly condemns the ill-treatment of the leatherback turtle, an environmentally sensitive species, as seen in the video.

“It is especially disheartening that after concerted efforts by government and non-governmental entities to sensitise persons against sitting or riding on the carapace of leatherback turtles, this is still happening now,” the environmental body noted.

It is appealing to citizens to refrain from harming environmentally sensitive species or face the consequences: a hefty $100,000 fine and imprisonment for two years.

“Members of the public are reminded that under the Environmental Management Act, any person who knowingly harms environmentally sensitive species is liable to a fine of one hundred thousand dollars ($100,000.00) and imprisonment for two years.”

The environmental body added that it will conduct further investigations into this incident with a view to determining the relevant enforcement actions to be taken.

It said it will also collaborate with the Ministry of Agriculture on other possible actions to be taken as the leatherback turtle is protected under the Conservation of Wildlife Act.

The Authority is also reminding the public that they may contact its Emergency Response Hotline at 680-9588 in the event of an environmental incident or for complaints complaints@ema.co.tt. or visit the EMA website at www.ema.co.tt.

"Impeding, interfering or riding the leatherback turtle may appear to be fun, until you face prosecution and the $100,000 fine,” Rambharat said in a Facebook post.