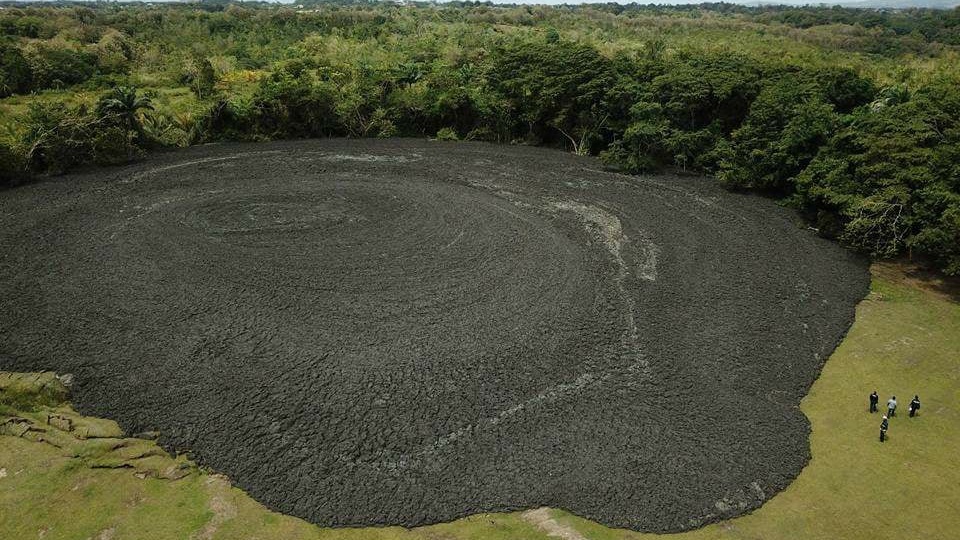 An inter-agency team of emergency responders reported that recent activity at the mud volcano at the Devil's Woodyard in New Grant, Princes Town, seems to be subsiding.

In an update posted Tuesday afternoon, following three confirmed eruptions of the mud volcano the Ministry of Rural Development and Local Government said the alert level for the site is currently level 1—the lowest on its disaster management scale— which means the volcano is in a state where it poses no immediate danger to human life and there is so far no indication, based on seismic and other tests, that a hazardous eruption is imminent.

“There has been some structural damage to the surrounding road but there’s a vast distance between the mud volcano and the nearest homes,” said Rishi Siew, the senior coordinator at the ministry’s disaster management unit. “A level 1 alert really means the regional corporation can handle the incident at this time since the volcanic activity does not disrupt or threaten the life or livelihood of any person or community.”

The ministry’s Level 1 rating is bolstered by the fact that air quality tests conducted by the Environmental Management Authority (EMA) at the New Grant site have so far returned normal results with only minimal traces of nitrogen dioxide detected.

The EMA is part of an interagency team which includes officials of the Princes Town Regional Corporation, the Seismic Unit of the University of the West Indies (UWI), the Office of Disaster Preparedness and Management, the Geological Society of Trinidad and Tobago (GSTT), and the ministry ’s disaster management unit who are working alongside police and fire officers on site to conduct air quality, seismic and other tests and put measures in place to ensure the safety of residents in the area.

Such measures include the temporary closure at approximately 10:00 am Tuesday morning of the Hindustan Road in New Grant to vehicular and pedestrian traffic except to people who live in the area.

The police also put residents of some 25 homes with proximity to the mud volcano on notice should a full-scale evacuation become necessary.

Further, in the event of an evacuation, the ministry and its partners at the regional corporation took a decision early today to activate and equip three shelters at the Hindustan Government Primary School, the Hindustan Presbyterian School and the Hindustan Community Centre, all of them well outside the “hot zone.”

Minister Rambharat is urging both residents and members of the public not to visit the New Grant mud volcano until there’s official word that it is safe to do so.

Man, 27, gunned down at friend's home in Embacadere, San Fernando