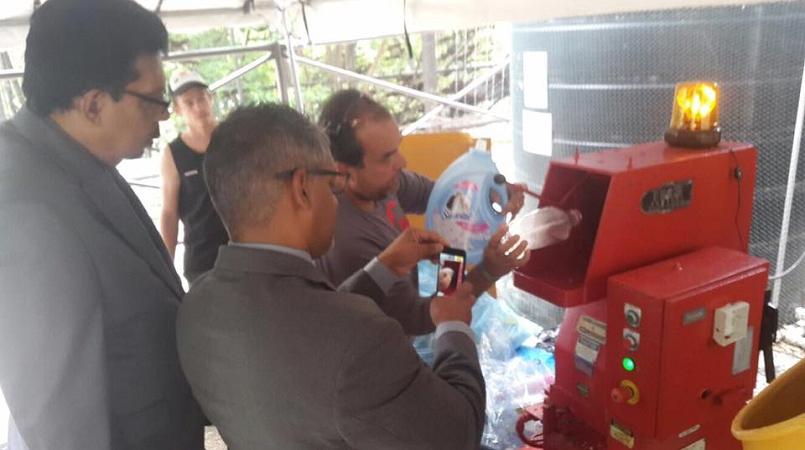 In a social media post on Tuesday, Rambharat showed the machines which are being used to recycle Styrotex and plastic which, in turn, can be used to make new products.

Both ministers visited the Zoo on Monday to get a close-up look at the project, which Rambharat hopes can be implemented in each Municipal Corporation later on.

"Yesterday, my colleague Minister Kazim Hosein, Minister of Rural Development & Local Government, got a closeup look at the plastic and styrotex recycling/reuse project now in place at the Emperor Valley Zoo."

"I am hoping it can be introduced to each Municipal Corporation as part of the National Cleanup program. Using the red stripper, the yellow mixer and the yellow mould, hundreds of thousands of bottles and other materials (no glass) are now stripped, mixed with small of amounts of cement and water resistant glues, and moulded in everyday objects, including benches."

"Each bench for example uses about 10,000 bottles, collected from beaches and other locations around the country."

Photos showed one bench which had been made with the recycled material.

Citizens commented positively and were encouraged at this environmentally-friendly initiative.

"Wow that is brilliant that could make a huge impact on recycling and preserving the environment, I hope the government takes this initiative and runs with it, private sector as well," said Leon Greaves.

"Excellent run with it.. Place these on school compounds.. will be of immense teaching and learning value...A national campaign should be launched...This is making sense (sic)," said Marilyn Lewis.

"I hope they bring one to Marabella soon. My relatives, neighbors and friends send hundreds of bottles every two weeks to recycle,” said Navin Singh.

"This is truly taking it to the next level Minister! Well done," said Colin Hosein.

The Zoo also took part in clean-up operations as part of the National Clean-up Campaign which is being done by the Rural Development and Local Government Ministry.

The campaign continues as follows:

For more information go to www.facebook.com/rdlgtt