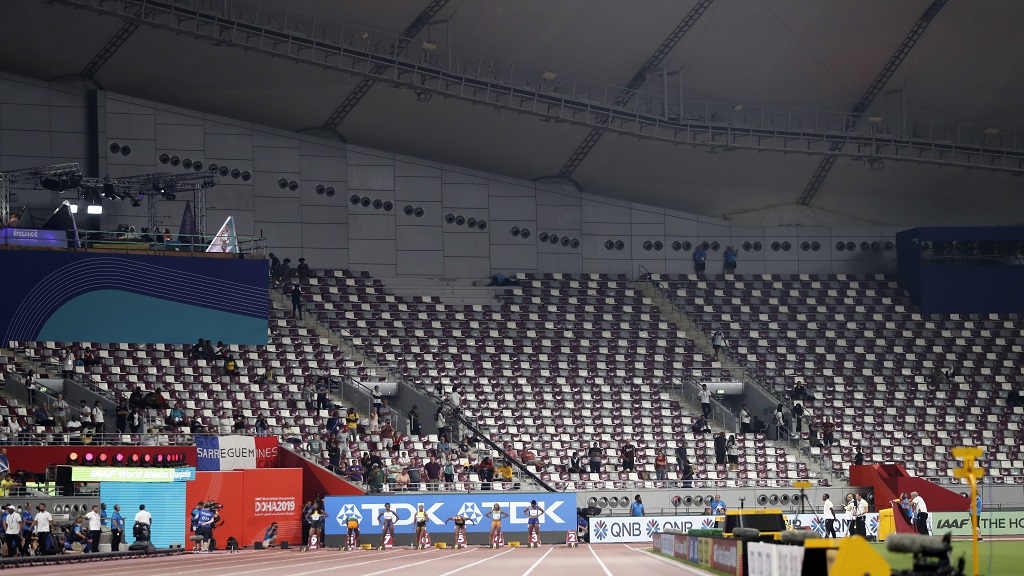 As Shelley-Ann Fraser-Pryce completed her victory lap after once again being crowned as the fastest woman on the planet, she held her 2-year-old son and waved to the crowd.

Well, crowd is an exaggeration. There appeared to be only dozens of fans left just minutes after the women's 100-meter final, one of the marquee events of the world track championships in Doha, Qatar. Most of them were Jamaican supporters, team officials or Fraser-Pryce family members.

Just before the race, as the lights dimmed for an extravagant laser show, it appeared that as few as 1,000 paying fans were in the stands at Khalifa International Stadium on Sunday night to see Fraser-Pryce win her fourth world title.

"I actually did notice that the stadium wasn't full," she said. "Even though there were 1,000 people in the stands, the two most important people were here to see me compete."

The lack of fans over the first three days of the event have renewed criticism of the IAAF's decision to award its showpiece event to a tiny country without a significant track and field fan base and intense heat.

The open-air stadium is air-conditioned, but the marathon and long race walks are being held after midnight through empty streets.

IAAF President Sebastian Coe can't blame the 2014 decision on predecessor Lamine Diack. Coe was not only a vice president of the governing body at the time but on the evaluation commission of bidders.

After the vote, Coe said Qatar "put some incentives on the table" including building tracks around the world. A year later, Coe was telling British parliamentarians he was unsure if the bid was clean.

Qatar's conduct in bidding for the world athletics championships, first unsuccessfully for the 2017 edition, remains under criminal investigation in France. A preliminary charge of "active corruption" was filed in May against Nasser Al-Khelaifi, the chairman of the beIN media group who also runs French soccer team Paris Saint-Germain. He denies wrongdoing. The case focuses on a $3.5 million payment to an IAAF official.

Hours before Fraser-Pryce's night of glory, Athletics Integrity Unit officials were in the stadium to talk about — among other areas of concerns — potential misconduct in Doha's bid.

"It is an area that is an area of concern, not only to us, but to others," AIU head Brett Clothier said, discussing the cooperation with French prosecutors.

When initially bidding for the 2017 worlds, Doha made a bold pledge to the IAAF: "No empty seats." Every session would be sold out, the prospectus said.

Three days into these championships, the stadium which could fit 40,000 people is yet to be full. Tens of thousands of seats are covered with fabric featuring the competition branding.

Even for the men's 100-meter final on Saturday night — the centerpiece of the championships — the fans were vastly outnumbered by empty seats.

"The IAAF need to learn and get better, fill up stadiums and make athletics a more interesting sport," said Akani Simbine, the South African who finished fourth in the 100-meter final. "That's the thing they need to figure out."

Eurosport, which holds Olympics rights across Europe, mocked the lack of crowd for women's sprint final.

"The Doha crowd roars with approval," Eurosport tweeted with a GIF of tumbleweed .

Broadcasting from a set in the stadium, former athletes broadcasting on the BBC rounded on the organizers.

"Our governing body has let our athletes down massively," said Denise Lewis, the heptathlon gold medalist at the 2000 Olympics.

But Dina Asher-Smith was careful not to criticize organizers after sealing silver to become the first British woman to win an individual world sprint medal.

"I definitely wouldn't call it sad. You shouldn't be so negative," Asher-Smith said. "I think that every country has a different kind of culture and bias towards events."

This is the first time the IAAF has taken its world championships to the Middle East.

"It's one of the great things about taking athletics to different parts of the world," Asher-Smith said, "because hopefully we are opening ourselves up to a global audience and dragging in some new fans."

Just not many, at least, in the country hosting the event.

"The stadium was empty and it's really disappointing," said Olympic pole vault champion Katerina Stefanidi, who won world bronze on Sunday. "I was all for bringing athletics to the Middle East and to different environments but maybe we're not promoting it enough or not promoting it to the right people. It's very sad."

Defiant Semenya to IAAF: Catch dopers, 'not us'