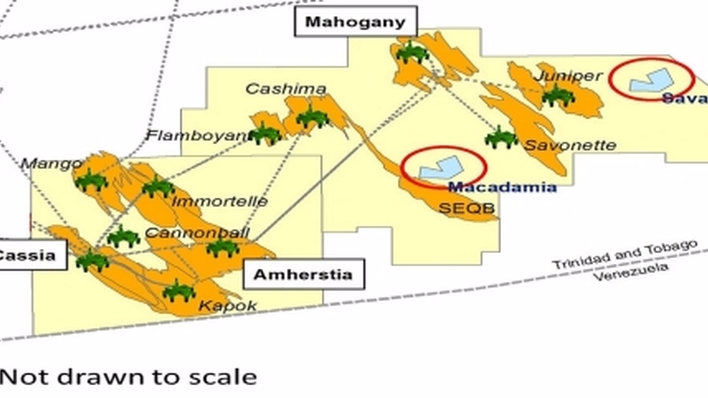 Franklin Khan, Minister of Energy, believes Trinidad and Tobago can lead the world in the exploitation of mature reserves.

The Minister’s comment was made at bpTT’s announcement yesterday of gas finds in its Macadamia and Savannah fields.

Reminding the audience comprising energy experts and executives that T&T has led the world before with the Trinidad Model for the monetisation of gas, Khan said we can lead the world again.

“As we led the world in the 1980s with the Trinidad Model for gas monetisation I think we can lead the world in terms of how we deal with a mature gas sector and how we analyse the value chain so we can bring value to all interests operating in the stream,” he said.

BP announced that it made two significant gas discoveries with the Savannah and Macadamia exploration wells, offshore Trinidad. The results of these wells have unlocked approximately two trillion cubic feet (tcf) of gas in place to underpin new developments in these areas, the energy giant said.

The Savannah exploration well was drilled into an untested fault block east of the Juniper field in water depths of over 500 feet, approximately 80 kilometres off the south-east coast of Trinidad. The well was drilled using a semi-submersible rig and penetrated hydrocarbon-bearing reservoirs in two main intervals with approximately 650 feet net pay. Based on the success of the Savannah well, BPTT expects to develop these reservoirs via future tieback to the Juniper platform that is due to come online mid-2017.

The Macadamia well was drilled to test exploration and appraisal segments below the existing SEQB discovery which sits 10 kilometres south of the producing Cashima field. The well penetrated hydrocarbon-bearing reservoirs in seven intervals with approximately 600 feet net pay. Combined with the shallow SEQB gas reservoirs, the Macadamia discovery is expected to support a new platform within the post-2020 timeframe.

Khan was in high praise for BP’s commitment to T&T, noting that for years we had been led to believe that T&T has become a mature province characterised by small pools of hydrocarbons.

“There is only one way to find oil and gas and that is by drilling wells. Two conditions need to be met: one the commercial terms must be met before the bit touches the seafloor and secondly there must be good science and BP has shown to be a leader on both fronts,” he said.

He singled out EOG as an unsung hero as BP’s preferred partner in the exploration for stranded reserves.

Looking at other areas waiting to be explored, Khan said exploration activities has so far been limited to one third of land and marine acreage.

“Of the remaining two-thirds, approximately 75 percent of the unexplored acreage is located in our East Coast deepwater areas where recent deep exploration activities have identified encouraging prospectivity and will be the subject of six exploration wells in the 2017/2018 period,” he said.

“The unexplored acreage on land and marine area represents a valuable resource to be exploited. To this end, the Ministry of Energy and Energy Industries have invited nominations for blocks onshore in shallow areas and the northern and eastern deepwater blocks. Nominations close on June 30,” he said.

He also revealed that the Ministry of Finance is undertaking a review of the fiscal regime with a view to restructuring a regime amicable to all players.