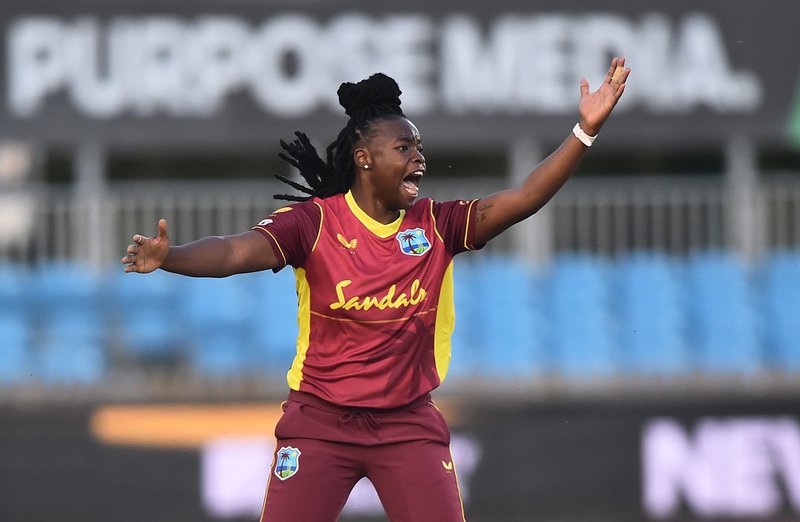 For the third time in four tosses, England won and elected to bat first against the West Indies.

Shamilia Connell set up the opening over of the first match with Aaliyah Alleyne making the breakthrough in the second over when she had Danni Wyatt caught behind for a duck.

Connell bowled the third over, once again setting up the tense situation for Alleyne to capitalize.

Alleyne did not waste as she once again teamed up with wicketkeeper Shemaine Cambelle to have England’s top scorer from the last match Nat Sciver caught behind for 6.

Karishma Ramharack playing in her first match of the series had opener Tammy Beaumont trapped LBW while attempting a reverse sweep.

For the first time in the series, England had less than 70 runs on the board after ten overs.

However, a bit of sloppy fielding and bad line and length allowed England to claw their way back to a demanding total.

Amy Jones top-scored for the hosts with 55 after being dropped on 2 by Lee Ann Kirby, followed by her captain Heather Knight with 42 as England finished their innings on 166/6.

Aaliyah Alleyne was the best West Indies bowler, taking 2/25 from her four overs.

For the first time in this series, Deandra Dottin was dismissed for single digits in the first over of the match, when she was bowled by Katherine Brunt for 4.

Shemaine Campbelle joined Lee Ann Kirby and the pair started a cautious rebuild of the innings despite a required run-rate of 8.36 per over.

Kirby was bowled by Sciver for 4 with the score on 26 in the third over.

Aaliyah Alleyne and Chedean Nation held a sixth-wicket record partnership of 38 runs for the West Indies against England Women, surpassing the previous record of 30 between Shanel Daly and Britney Cooper which stood since 2010.

However, this partnership was not enough to sustain the innings. It was soon over when the West Indies finished their innings on 122/9.

Nation was the highest runs-scorer with 30, followed by Alleyne with 15.

Bowling for England, Sarah Glenn finished with 2/15 from three overs, while Katherine Brunt had 2/21 from her allotted four overs.