Estate constables removed from post after assault on journalists 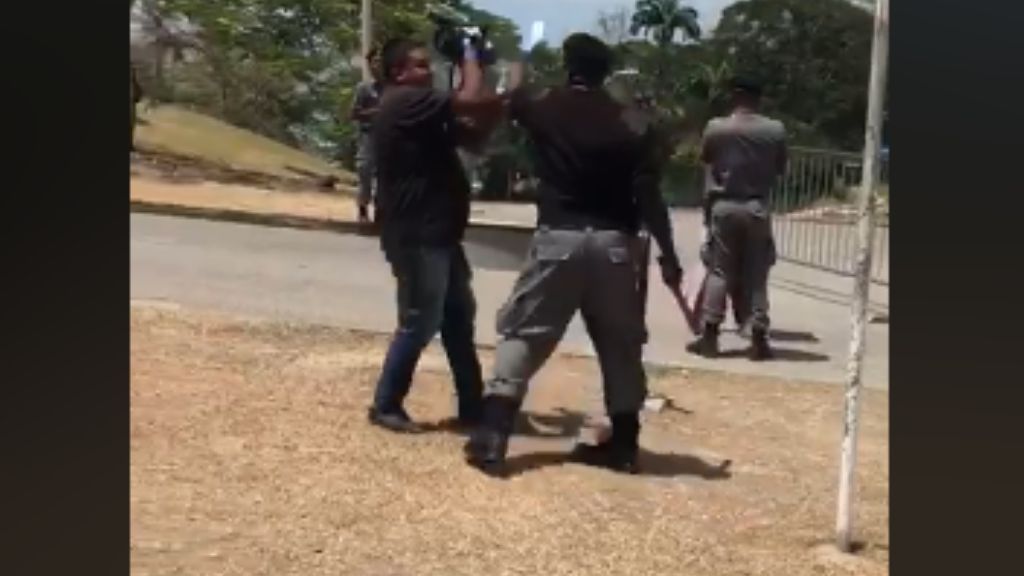 Amalgamated Security Services Limited (ASSL) has temporarily removed two Estate Constables stationed at the San Fernando General Hospital from their post following an assault on journalists, which was captured on video.

ASSL said an internal investigation is being conducted to review the constables’ execution of duty.

In the video uploaded to social media, the two officers can be seen physically jostling the journalists and heard verbally abusing them.

The media personnel, from various news outlets, were at the hospital’s public carpark getting cutaway shots. They explained to the ASSL personnel that they sought approval from the South West Regional Health Authority (SWRHA) through its Communications Manager, Kevon Gervais.

The journalists’ cameras were damaged during the scuffle.

A police report has since been filed.

In response to the incident, ASSL has offered a vastly different account of what transpired as it sought to provide “context” to the video circulating on social media.

According to ASSL, one of their Estate Constables, stationed at the gate to the Accident & Emergency Section of the San Fernando General Hospital (SFGH), observed a group of then unidentified persons taking video recordings of the area and trying to gain further access.

ASSL noted that in order to protect the privacy of patients, taking photos as well as video recordings are strictly prohibited in this area, and the respective signage is provided within the A&E section (inside the hospital).

According to ASSL’s account, the Estate Constable alerted an Officer attached to the SWRHA who approached the group and “unsuccessfully tried to stop them from video recording, as a result of which an argument erupted”.

The ASSL account further claimed that the estate constable “highlighted that the person the reporters pretended to have an appointment with, is no longer employed with the SWRHA, and therefore their claim is misrepresentative”.

Loop News, however, has confirmed that the individual ASSL has claimed is no longer employed with the SWRHA, is the current Communications Manager, Kevon Gervais.

ASSL further claimed that media personnel “continued to violate existing policies of the SFGH and in response the Estate Constable, supported by a male colleague, proceeded to reinforce their standing orders as issued by the security department of the SFGH”.

ASSL defended the actions of its employees, stating that it is “disheartening that reporters of the media seemingly cannot accept and support the fact that Security Officers and Estate Constables, as members of the same Essential Services that are so desperately needed during these challenging times, are there for a good reason and that reason is to reinforce policies and orders that were put in place to protect all of us, members of the broader public.”

The security firm said during this time of heightened anxiety “all service members are trying their best, and the more we all cooperate, the more we as a Nation will achieve”.