EU leaders vow to press on with 'no-deal' Brexit plans 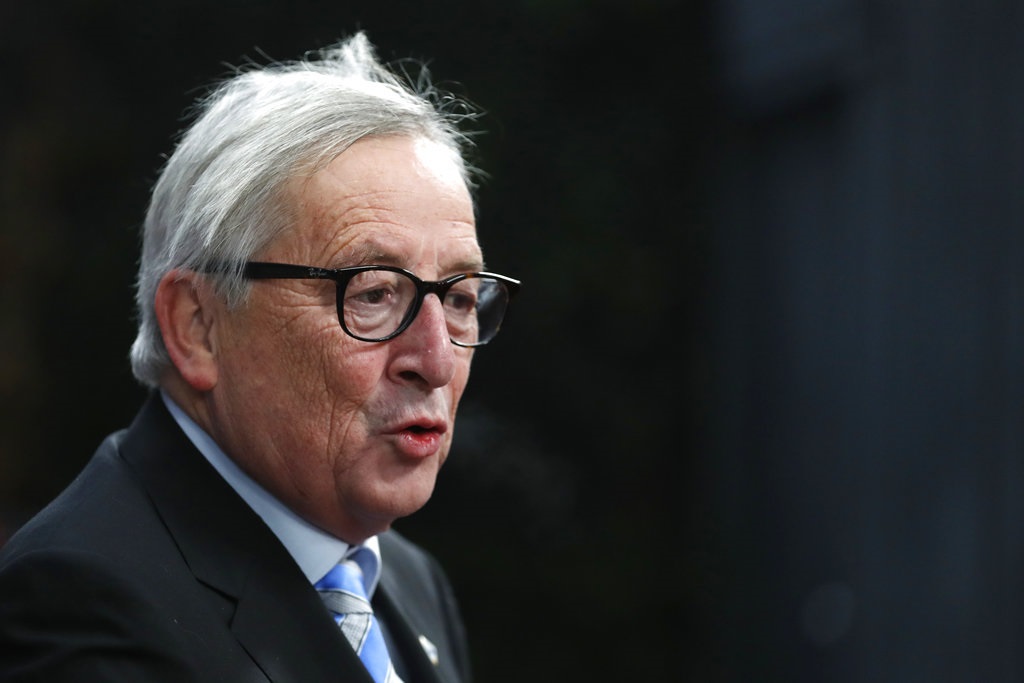 European Commission President Jean-Claude Juncker arrives for an EU summit in Brussels, Friday, Dec. 14, 2018. European Union leaders have offered Theresa May sympathy but no promises, as the British prime minister seeks a lifeline that could help her sell her Brexit divorce deal to a hostile U.K. Parliament. (AP Photo/Alastair Grant, Pool)

European Union leaders expressed deep doubts Friday that British Prime Minister Theresa May can live up to her side of their Brexit agreement and they vowed to step up preparations for a potentially-catastrophic "no-deal" scenario.

May cancelled a Brexit vote in the U.K. Parliament this week after it became clear the assembly would reject the deal she concluded with the EU last month. She travelled to Brussels in hope of wringing some concessions from her European partners that would help assuage doubts about the draft divorce agreement back in London.

But EU leaders rejected any attempt to renegotiate their agreement, a 585-page legal text settling things like the divorce bill and the rights next year of Europeans living in Britain or Britons living in the EU, plus a document laying out their hopes for future relations, which isn't legally binding. They did publish a short text with "assurances" about how the deal would work.

"Very objectively, the signals that we heard yesterday are not especially reassuring about the capacity in Britain to be able to honor the engagement that was undertaken," Belgian Prime Minister Charles Michel told reporters.

Expressing a "gigantic doubt" that May can get the deal through Parliament, Michel said: "we are going to be sure to prepare for all hypotheses, including the hypothesis of a no-deal."

No country has ever left the 28-nation EU — the world's biggest trading bloc — and the rules laying out that process are sketchy. Essentially, Brexit is being made up as the process advances. Court challenges have clarified some of the rules. This week, Europe's top court ruled that Britain can change its mind about leaving should it want to. One thing is clear: Brexit will happen on March 29, although a transition period will help ease Britain out over almost two, and possibly up to four, years.

The prospect of a no-deal has shaken markets and the British pound and created uncertainty for investors and businesses. Brexit involves Britain leaving around 750 international treaties drawn up over 40 years of membership. One of them is the EU's aviation market. Without a deal, British planes won't be able to land in Europe on March 30. Nor will European planes be able to land in the U.K.

May didn't talk to reporters as she entered EU headquarters early Friday for talks with French President Emmanuel Macron, after shuttling around Europe earlier this week seeking support.

Should she make clear her government's needs from the EU, and her plan to persuade Parliament to adopt the agreement in January, EU leaders could convene against next month.

Croatian Prime Minister Andrej Plenkovic said that "if there is a need we can always convene."

Plenkovic said the statement EU leaders released overnight "is a solid signal, first of all to the prime minister, but also to the U.K. Parliament."

Luxembourg Prime Minister Xavier Bettel appealed to British MPs to keep the interests of their citizens in mind.

"For internal political reasons, some people try to gamble on the relations between the EU and the U.K. for the future. It's bad. This is the best possible deal," Bettel said. "They should think about the interests of their voters and people in their country."

In Britain, Cabinet Office Minister David Lidington, a senior May ally, insisted Thursday's talks in Brussels had been "a welcome first step," noting that the EU had said it wanted a "speedy U.K. trade deal" after Brexit.

But opponents of the government said the meeting showed that May's deal would never get the support of Parliament.

Scottish First Minister Nicola Sturgeon tweeted that May "has tried, credit to her for that, but, as expected, the EU is not open to renegotiation. It's time to stop this pretence, bring the vote to Parliament and then when the deal is rejected, seek to bring majority behind a second EU vote. Anything else now is just wasting time."

The Latest: UK says delayed Brexit vote to be held by Jan 21