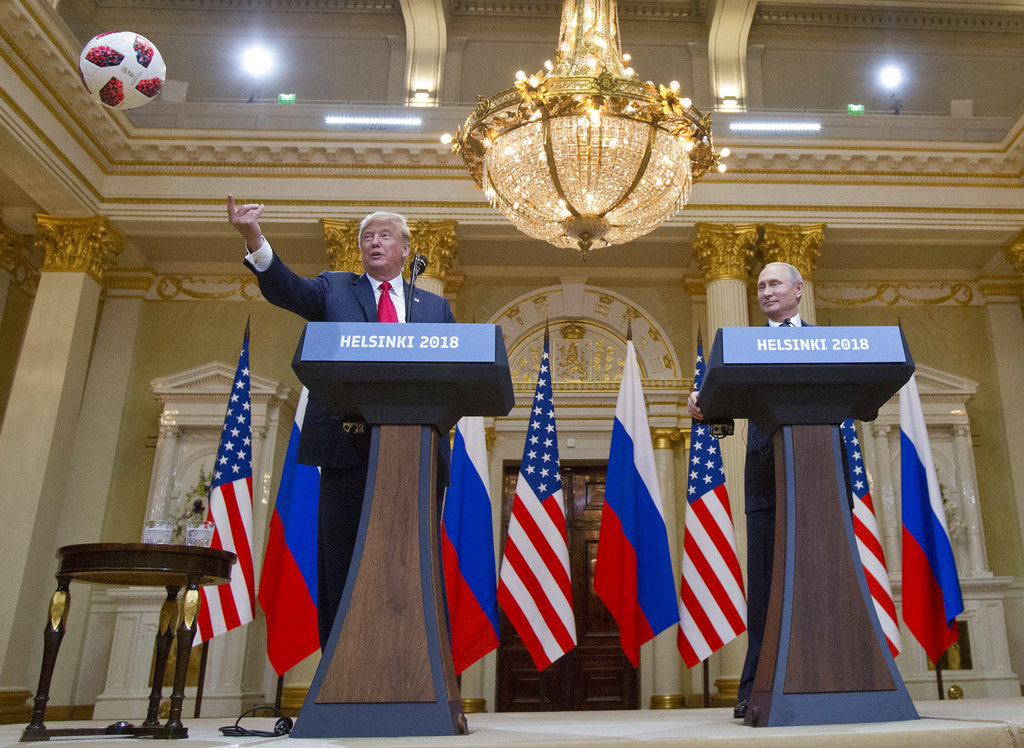 U.S. President Donald Trump, left, tosses a football to his wife first lady Melania Trump after Russian President Vladimir Putin presented it to him during a press conference after their meeting at the Presidential Palace in Helsinki, Finland, Monday, July 16, 2018. (AP Photo/Pablo Martinez Monsivais)

After a week of the worst barrage of insults yet from U.S. President Donald Trump, the European Union is looking westward toward the White House less and less.

Making it worse, after barking at his European allies, Trump spent Monday cozying up to EU adversary Vladimir Putin in an extraordinary chummy summit with the Russian leader in Helsinki.

Never mind. In an age when Trump has made political optics all-important, on Tuesday, the EU struck back. Key EU leaders were in the far east in China and Japan looking for the trust, friendship and cooperation they could no longer get from a century-old ally.

Trump's embrace of Putin and the EU 's Asian outreach highlights the yawning rift, widening more by the day, in a trans-Atlantic unity that has been the bedrock of international politics for the better part of a century, as countless graves of U.S. soldiers buried in European soil bear witness to.

Trump's abrasiveness and America First insistence had been a given even before he became president. Europe's increasing resignation to let go of the cherished link to the White House is much more recent.

"This Helsinki summit is above all another wake-up call for Europe," said Manfred Weber, the German leader of the EPP center-right group in the European Parliament, the legislature's biggest.

"We Europeans must take our fate in our own hands."

It was a startling sentiment coming from someone who hails from the same German Christian Democrat stock as Angela Merkel, Helmut Kohl and Konrad Adenauer, staunch supporters of the trans-Atlantic link over the past three-quarters century.

There have been other signs of the growing European detachment from the White House, especially after Trump pulled out of the global climate agreement and the Iran nuclear deal the EU brokered.

"With friends like that, who needs enemies?" Tusk asked two months ago.

Soon, Trump had also piled on economic punishment with punitive tariffs on European steel and aluminum.

Then came the NATO summit. Already viewed with apprehension, reality turned out to be worse.

First, Trump called Germany, the powerhouse of the European Union, "captive" to Russia. Then he suggested that Britain should "sue" the EU over Brexit terms. Finally, he finished off by calling the 28-nation bloc a trade "foe."

"For Trump, the categories of friend, ally, partner, opponent, enemy don't exist. For him there is only his own ego," said the head of the German parliament's foreign affairs committee, Norbert Roettgen.

So little wonder the EU has turned for friends elsewhere — and found one Tuesday in Japan, where the bloc said it put in place "the largest bilateral trade deal ever."

Up to two years ago, that was supposed to be the Trans-Atlantic Trade and Investment Partnership, or TTIP, trade deal between the EU and the United States. But Trump quickly let it be known that such an international agreement would not happen on his watch.

"This is an act of enormous strategic importance for the rules-based international order, at a time when some are questioning this order," Tusk said at a joint news conference in Tokyo with Japanese Prime Minister Shinzo Abe.

"We are sending a clear message that we stand together against protectionism."

Despite all, there remained hope that on the most critical of geopolitical security issues, Trump would remain true to American ideals. Instead, he unleashed unprecedented criticism at last week's NATO summit.

Fully extracting itself from the United States, though, is a daunting challenge for Europe.

Militarily, with the exceptions of France and Britain, the European allies have lived under the nuclear umbrella of the United States since World War II. Defense cooperation outside of U.S-dominated NATO is only now taking off and the blocked Brexit negotiations make such a prospect fraught with uncertainty.

That military dimension, and the bond between Europe and the United States, has a special resonance in nations like Poland and the Baltic states, which had long been under the thumb of Moscow before the collapse of the Soviet Union.

Hence, Monday's Helsinki summit was seen with apprehension that Trump might make dramatic concessions to Putin and leave parts of Europe with too little protection. In Poland, the 1945 Yalta Conference is seen as a symbol of political treason because, without Poland's participation and against Poland's will, it put the country under Soviet control for decades, until 1989.

On Tuesday, there was some relief on that score. Krzysztof Szczerski, the foreign policy adviser to Polish President Andrzej Duda, said that all those who "prophesied that the Trump-Putin meeting will lead to a second Yalta were very wrong."

Despite relations sinking to new lows almost every week, the EU will still make another attempt this month to mend fences, knowing that trade wars will hurt all. EU Commission President Jean-Claude Juncker is to visit Trump in Washington on July 25.

The Latest: Trump to Putin: The world wants us to get along