Europe reopens many borders but not to Americans, Asians 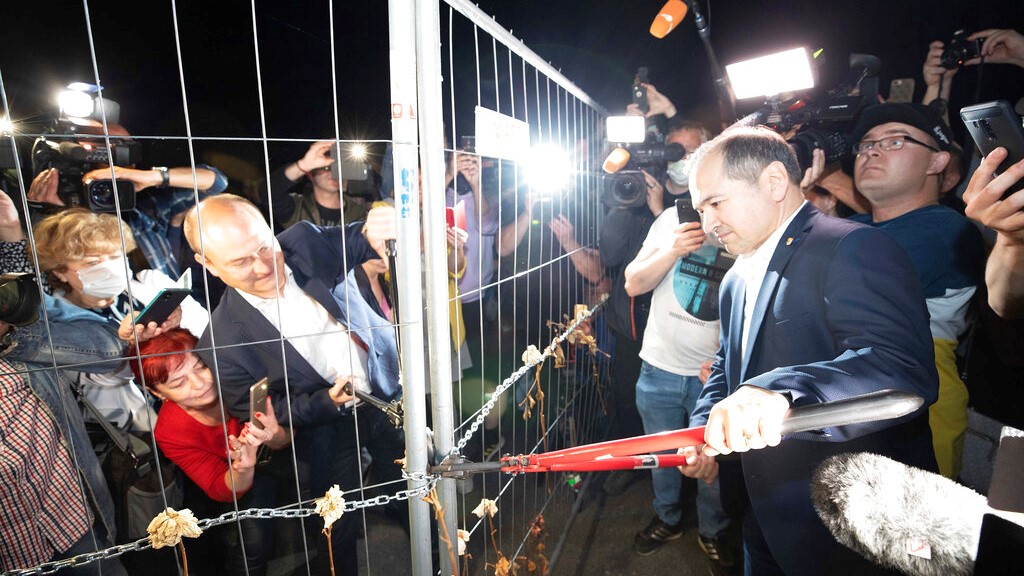 (Friday, June 12, 2020) Lord Mayor of Gorlitz Octavian Ursu, center right, and Mayor of Zgorzelec, Poland, Rafal Gronicz, center left, together open the border fence on the Gorlitz Old Town Bridge in Gorlitz, Germany. Europe is taking a big step toward a new normality after the coronavirus outbreak as many countries open up their borders to fellow Europeans – but exceptions remain, and it remains to be seen how many will use their rediscovered freedom to travel. (Daniel Schafer/dpa via AP, file)

Europe is taking a big step toward a new normality as many countries open borders to fellow Europeans after three months of coronavirus lockdowns — but even though Europeans love their summer vacations, it's not clear how many are ready to travel again.

Tourists from the US, Asia, Latin American and the Mideast will just have to wait, for now.

The European Union home affairs commissioner, Ylva Johansson, told member nations last week that they "should open up as soon as possible" and suggested Monday was a good date.

Many countries are doing just that, allowing travel from the EU, Britain and the rest of Europe's usually passport-free Schengen travel area, which includes non-EU countries like Switzerland.

Europe's reopening won't be a repeat of the chaotic free-for-all in March when panicked, uncoordinated border closures caused traffic jams that stretched for miles. Still, it's a complicated, shifting patchwork of different rules. And although tourist regions are desperately counting on them, a lot of Europeans may decide to stay close to home this summer.

That's something tourism-dependent Mediterranean countries such as Greece are keen to avoid. Prime Minister Kyriakos Mitsotakis acknowledged Saturday that "a lot will depend on whether people feel comfortable to travel and whether we can project Greece as a safe destination."

Greece has emphasized the handling of its outbreak, which saw only 183 deaths. Overall, Europe has seen more than 182,000 virus-linked deaths this year, according to a tally by Johns Hopkins University that also shows Europe has had 2.04 million of the world's 7.8 million infections.

Spain, which isn't ending restrictions on domestic travel for another week and will restart foreign tourism in full on July 1, is allowing thousands of Germans to fly to the Balearic Islands for a two-week trial run starting Monday — waiving its 14-day quarantine for the group.

Border checks in some places have already wound down. Italy opened its borders on June 3 and towns on the German-Polish border celebrated early Saturday as Poland opened the gates. At midnight, the mayors of Goerlitz, Germany and Zgorzelec, Poland cut through chains on a makeshift fence that had divided the towns.

Germany, like France and others, is lifting remaining border checks on Monday and scrapping a requirement that arrivals must prove they have a good reason to enter. It also is easing a worldwide warning against nonessential travel to exempt European countries – except, probably, Finland, Norway and Spain, where travel restrictions remain, and Sweden, where the level of new coronavirus infections is deemed too high.

Many German regions have re-imposed a quarantine requirement for arrivals from Sweden, whose virus strategy avoided a lockdown but produced a relatively high death rate.

Czech authorities will require arrivals from Sweden to show a negative COVID-19 test or to self-quarantine – along with travellers from Portugal and Poland's Silesia region.

Austria is opening up Tuesday to European neighbours except for Spain, Portugal, Sweden and Britain — and keeping a travel warning for Italy's worst-hit region of Lombardy. France is asking people from Britain to self-quarantine for two weeks.

Britain recently introduced a 14-day quarantine requirement for most arrivals, to the horror of its tourism and aviation industries, which say the move will hit visits to Britain hard this summer.

Denmark is opening up only for tourists from Germany, Norway and Iceland — and only if they can prove that they're staying for at least six nights. Norway also is keeping shut its long border with Sweden.

"I realize this is a big disappointment. But the restrictions are based on objective criteria that are the same for everyone," Norwegian Prime Minister Erna Solberg said. "If we open too quickly, the infection can get out of control."

With flights only gradually picking up, nervousness about new outbreaks abroad, uncertainty about social distancing at tourist venues and many people facing unemployment or pay cuts, this may be a good summer for domestic tourism.

German Chancellor Angela Merkel and Austrian Chancellor Sebastian Kurz are both planning to vacation in their homelands this year.

"The recommendation is still, if you want to be really safe, a vacation in Austria," Austrian Foreign Minister Alexander Schallenberg told ORF television, recalling the scramble in March to bring home thousands of tourists as borders slammed shut. "In Austria, you know that you don't have to cross a border if you want to get home, and you know the infrastructure and the health system well."

The German government, which helped fly 240,000 people home as the pandemic grew exponentially, also has no desire to repeat that experience.

"My appeal to all those who travel: Enjoy your summer vacation — but enjoy it with caution and responsibility," German Foreign Minister Heiko Maas said. "In the summer holidays, we want to make it as difficult as possible for the virus to spread again in Europe."