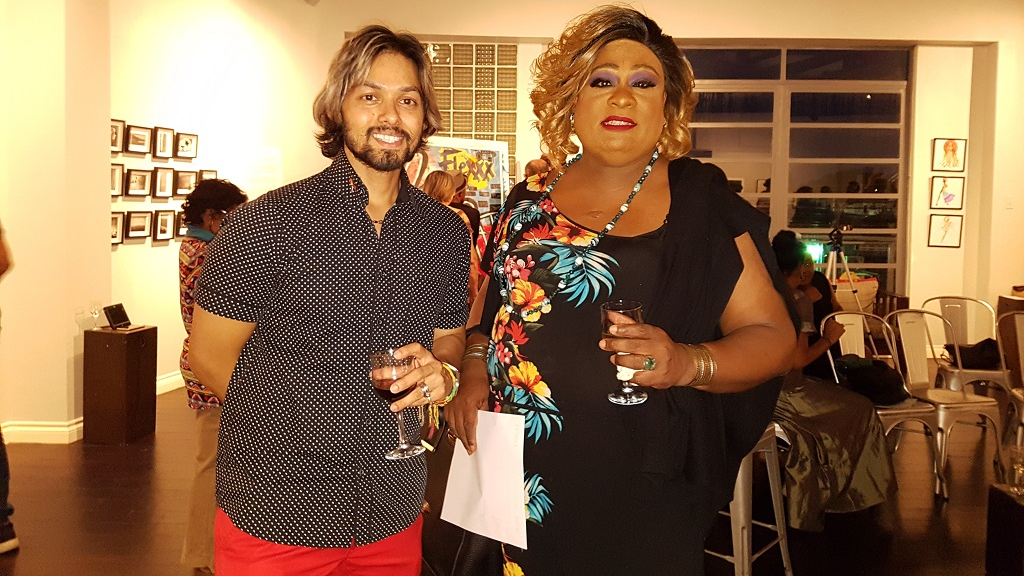 Photo L-R: Chairman of Pride TT, Rudy Hanamji, and Brandy Rodriguez, President of the Trinidad and Tobago Transgender Coalition, pose for a photo at the launch of 'Iere' Art Exhibit at the LOFTT Art Gallery in Port of Spain. Photos courtesy Paula Obe.

Artists and allies of the LGBTQIA+ community called on each other to face their fears through artistic expression at the launch of the first art exhibit for Trinidad and Tobago's Pride Month, called 'Iere', earlier this week.

Artists Adele Todd, Anthony Medina and Peter Sheppard addressed attendees of the exhibit, which is on at the LOFTT Art Gallery from July 1-12, 2019.

The theme of this year’s Pride Month, Equity and Equality for All (#Equall), also focuses on the transgender community, which has helped support and propel the movement forward but still faces the fear of violence.

Pride TT Chairman, Rudy Hanamji, said a group of Trans people were attacked and beaten just a few weeks prior to the launch.

“Three weeks ago members of the Trans community were actually beaten within inches of their lives. One of them had to run to Tobago to seek refuge. So the risk of violence, both physical and emotional, is always present for our community and that is why Pride is so important because it helps to push back against those negative energies.”

“It cannot be denied that a large section of the artistic community does come the LGBTQI+ community. We wanted to put a spotlight because…there are LGBTQI+ artists who don’t feel free enough to express themselves. They sometimes create work through the lens of the hetero world…those kinds of issues need to be addressed because we need to encourage our artists to truly be themselves,” Hanamji said.

Speaking at the exhibit, Todd and Sheppard agreed that artists should face their fears when addressing LGBTQIA+ themes in their art.

“Most of the work in this gallery is very safe. We need to be bold, be responsible and express greater, these things without fear of being persecuted," said Sheppard.

Todd said while being an artist is difficult, being an LGBTQIA+ artist may be doubly so.

“We have the opportunity to begin this conversation. To be an artist in Trinidad and Tobago, or anywhere, is a difficult profession.

“You are your own critic, you have to motivate yourself and put the work out there. Many times some of the things you think people would like, they don’t even notice.”

“You cannot achieve (artistic expression) if you’re not comfortable with your sexuality…if you don’t want to take a chance,” she said.

She added that drawing the nude human body is not sexual in any way but is an act of artistic expression and that people shouldn’t feel uncomfortable because of this.

“Drawing the form is still important for art historians and artists who practice drawing the body. In London there are still portraiture shows,” she said.

She said hopefully one day people may be able to express themselves without labels.

Todd: We exist, get over it

Todd said it’s time for the people of Trinidad and Tobago to overcome their homophobia and acknowledge that people with in the LBTQIA+ community exist, and they always will.

“Being LGBTQIA+ has been with us forever, get over it. We exist and we always will.”

“When I say that to people, they get it and they stop the bullsh*t, and they think, and (they realise) that thought was narrow,” she said.

Todd also expressed her full support for the exhibit.

“I support this wholeheartedly because, without it, creativity would die,” she said.

Pride Month in Trinidad and Tobago takes place from June 28-July 28, 2019, in memory of transgender woman Sasha Fierce who murdered in December 2017.

For more information on the exhibit, visit the LOFTT gallery on Facebook at https://bit.ly/324vN8e