Faris Al-Rawi: There was merit behind E-mailgate allegations 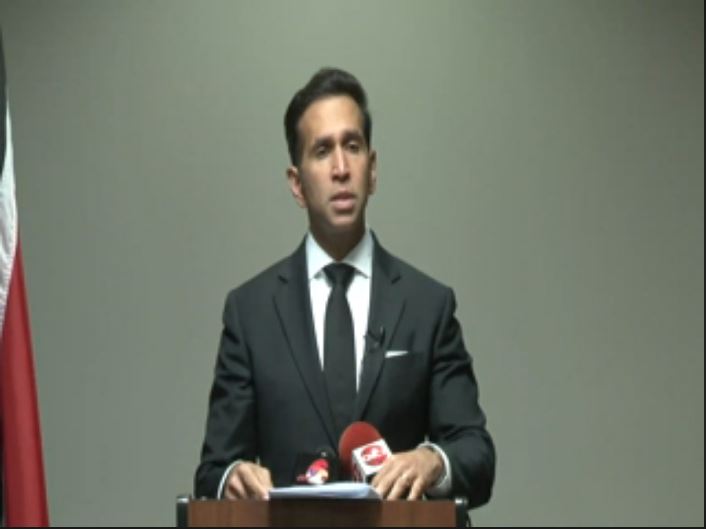 Attorney General Faris Al-Rawi is seeking to provide clarity on the conclusion of the 2013 'e-mail gate' probe which the Police Service revealed on Wednesday, had come to an end.

In a news conference held hours after the announcement, Al-Rawi read from a copy of the police report which includes the opinion of Deputy Director of Public Prosecutions, Joan Honore Paul. He said he opted to reveal the findings to the media as there has been "selective reporting" on the outcome.

The AG recalled that on May 20 2013, then Opposition Leader Dr Keith Rowley told the parliament that he anonymously received emails implicating then Prime Minister Kamla Persad-Bissesar and members of her Government in a criminal conspiracy. The email thread was dated in September 2012.

Dr Rowley said he received the emails six months prior to his May announcement and had delivered them to the President and requested an investigation which did not commence. As such, he revealed his findings to the parliament which ultimately led to a police investigation.

Al-Rawi said the probe had seven steps which included requesting the assistance of the United States Department of Justice. The department sought a preservation order on behalf of Trinidad and Tobago, from a US District Judge to access the emails from September 2012 from the respective servers. The AG said this judicial order would not have been granted if sufficient evidence was not provided.

He said the US Department of Justice also sought further information from Google and according to the excerpt from Honore-Paul's opinion, there was merit to the allegations.

"The conclusion reads as follows: the authenticity of the 31 subject emails can neither be confirmed nor denied. However, evidence gathered supported the fact that several of the events referred to in these emails, can be confirmed as having actually occurred in the way and at the time referred to in the emails. This last assertion is supported by the fact that an independent District Court Judge in the United States of America was satisfied that the evidence had sufficient cogency to result in the granting of the warrant to search the servers of the internet service providers, Microsoft Corporation and Google Inc.

That application required the judge to examine the email content and actual surrounding facts and circumstances as they occurred at the time that the emails were allegedly sent.

Such warrant could not have been granted if the applicants had not shown probable cause, i.e that those surrounding facts and circumstances were sufficient in themselves to support a belief by a man of reasonable caution that a crime had been committed."

The report also noted that as part of the investigation, the TTPS was required to gather evidence of incidents that occurred during the time of the events of September 2012, in order to ascertain the authenticity of the emails and establish the foundation of probable cause.

He said investigators found that there was sufficient evidence in the occurrences of September 2012 and the emails.

Meanwhile, Al-Rawi revealed that the US Department of Justice was asked to enquire from Google and Microsoft, whether they could verify if what was produced in answer to the subpoena, represents all content and communication data contained in the accounts of the persons named in the email threads.

He noted that the response from the US Department of Justice explained that the FBI provided all the data for the captioned accounts for the specified period, provided by Google Inc. It further noted that any data within the period which was or may have been deleted by the account holders, prior to the issuance of the preservation order, would not be producible in any form.

The letter also revealed that it is possible/likely that the data sought may no longer exist due to the account holder's possible deletion of the data prior to the preservation order. This means that since requests for preservation orders were made nine months later, anything deleted would not be recovered.

Al-Rawi said the report also disclosed that only one of the people named in the email threads surrendered his device to be examined by investigators; then security adviser Gary Griffith. He said representatives of the others failed to agree to the terms and surrender their devices.

The individuals involved in the email-scandal include then Prime Minister Kamla Persad-Bissesar, then Attorney General Anand Ramlogan, then National Security Minister Gary Griffith and then Minister of Works Dr Surujrattan Rambachan.

The emails purported a plot for Chief Justice Ivor Archie to appoint Deputy Director of Public Prosecutions Roger Gaspard as a High Court Judge although he never applied for the position. The DPP decides whether someone is formally charged for a criminal offence.

After news that the probe had come to an end, the Opposition called for the resignation of Prime Minister Dr Keith Rowley.

AG: 'Emailgate' matter far from over