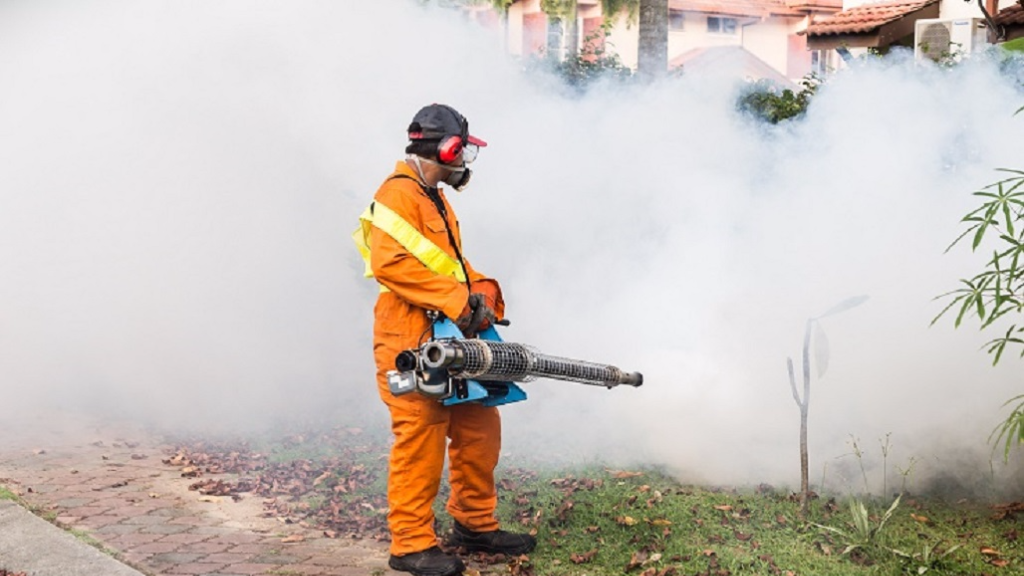 Environmental conservation group, Fishermen and Friends of the Sea (FFOS), is questioning the use of neurotoxins in current mosquito fogging methods and its effect on the population.

In a statement issued Wednesday, the group's corporate secretary Gary Aboud said the presence of malathion, which is a neurotoxin, may be injurious to humans during the spraying process.

"Every rainy season is accompanied with a surge of mosquitoes and yet our Government fails to take even the simplest, least expensive, preventive precautionary measures to control mosquito populations."

"Instead, once again the Regional Corporations under the guidance of the Ministry of Health has resumed fogging in the capital city and nearby residential areas with a mixture of 96% Malathion and 4% diesel. Malathion is a neurotoxin," the group said.

The group added that the decision to use Malathion fog in the United States (U.S.) is based on scientific analysis of adult mosquitoes caught in traps and whether these trapped mosquitoes are carriers of diseases.

"Has the Ministry of Health or its divisions conducted any investigations on any disease carrying mosquito populations in our communities before they are fogged? What is the science behind the decision to use the last resort of fogging in our communities?"

The group said that fogging is a temporary measure and is not effective in quelling the mosuito population.

"Fogging reduces the adult mosquito populations by 60% and only for a short period of time. It has no effect on the larvae and pupae stages which eventually mature and repopulate the communities quickly."

"Unless in cases of widespread disease outbreak of epidemic proportions, fogging amplifies the mosquito problem as it ends up killing the mosquitoes’ natural predator, the insectivorous bats and beneficial pollinators."

The group cited the US National Pesticide and Information Centre (USNPIC), which says that Malathion is highly toxic to bees and beneficial insects and moderately toxic aquatic life and birds and other avian species.

"Is our Ministry of Health or the Insect Vector Control Division aware of the concentrations of Malathion being applied especially at close range in residential areas?" The group added.

The group is asking what post-fogging assessments are being done to ascertaint the effectiveness of fogging exercises and whether this successfully keeps mosquito numbers at bay.

"The safety and effectiveness of Malathion has not been evaluated for the past 21 years by the U.S.E.P.A. If the human and ecosystem risks of the repetitive cumulative exposure to malathion is unknown, shouldn’t we investigate these risks and until then shouldn’t we exercise the precautionary principle? And if spraying is the only option in an epidemic situation, why haven’t our officials explored organic sprays, that are not neurotoxic?"

"Fogging creates a false sense of security because of its limited effectiveness. It endangers the health of our communities and threatens beneficial pollinators whilst averting the much-needed attention from the required preventive measures."

The group said a 'systematic approach' is needed and that fogging should be used as a last resort.

"What is our Governments year-round systematic sanitation drive? Has our administration adopted preventative and alternate control measures such as removing the mosquito habitats which would eradicate mosquitoes at the larval stage; embarked on biological mosquito control programs; or developed an Integrated Pest Management Plan which focuses on pest prevention, pest reduction, and the elimination of conditions that lead to pest infestations?" The group asked.

The group said the issue must be addressed before more harm is done to other animals, creating an ecosystem imbalance.

"Unless preventive measures are first exhausted, we risk ecosystem imbalances such as the decimation of insectivorous bats and beneficial pollinators, and the cumulative impacts of long-term neurotoxin poisoning in dense roadside communities."

It is used in the agricultural production of a wide variety of food and feed crops to control many types of insects such as aphids, leafhoppers, and Japanese beetles and is used in the USDA’s Cotton Boll Weevil Eradication Program and Fruit Fly (Medfly) Control Program.

The chemical is also used by home gardeners for outdoor residential uses including vegetable gardens, fruit trees, and a variety of ornamentals, as well as in public health pest control programs for controlling mosquito-borne illnesses.