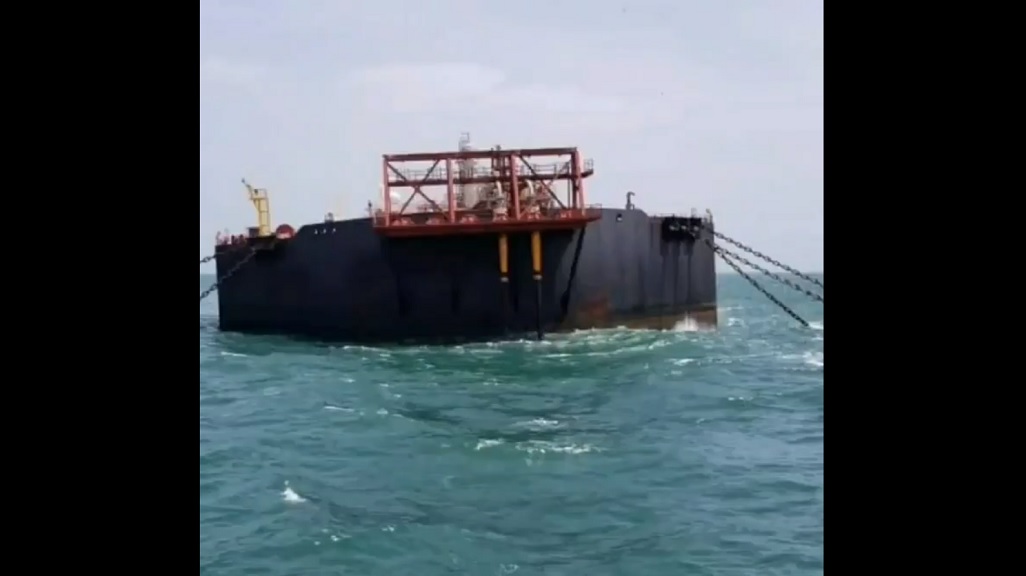 Government said it is in communication with Venezuelan representatives over the Floating Storage Offloading (FSO) Nabarima, after reports that the vessel was at capacity with around 1.3 million barrels of oil, and was said to be below the water line.

The Ministry of Energy and Energy Industries (MEEI) said in a statement issued September 3 that it is in communication with Venezuela and has offered assistance in addressing the situation.

'The MEEI has initiated official communication to get independent verification of the status of the vessel from the Venezuelan authorities in addition, the MEEI, through the Venezuelan Embassy in Trinidad and Tobago, has offered any assistance, technical or logistical, to the Government of Venezuela that it may require in this matter. Additionally, the Minister of Energy is in contact with his Venezuelan counterpart for further updates as they become available.'

The Ministry reminded that while they have offered help it is up to the Venezuelan authorities to accept:

The Nation needs to be reminded that Venezuela is a sovereign state and Trinidad and Tobago cannot unilaterally enter Venezuelan territory to conduct any reconnaissance or other works without being invited to so do.'

'There exists a bilateral agreement between Venezuela and Trinidad for an oil spill contingency plan, in the event that a genuine risk exists or an active spill occurs. This agreement will guide the action of the Government of the Republic of Trinidad and Tobago.'

The Ministry said it continues to closely monitor developments, following reports that the vessel was said to be taking on water and had sunk 14.5 metres below the waterline.

The FSO Nabarima stores crude produced from the Corocoro field which is operated by a Joint Venture (PDVSA 74% ENI- Italian Multinational 26%).

Production is normally stored in the FSO for transhipment by oil tankers for export. This transhipment has stopped since the US sanctions. The FSO is now filled to capacity (1.3 million barrels of oil).

The Ministry said initial reports from the Venezuelan authorities indicated that the vessel was upright and in a stable condition and that there was no risk of an oil spill.

The Ministry said the Nabarima is a double hull vessel, which should provide protection from spillage in the event that the vessel sinks.

'Recent reports from the national press has stated that the vessel has tilted 5 degrees to the right and that it has sunk 14.5 meters at the water line.'

'An ARGUS report dated September 2nd quotes a statement from ENI, the Italian Multinational energy company who has minority interest in the field. The report indicated that the FSO is stable and that the recent water leak has been solved.'

'The report further stated that plans are afoot to transfer the crude oil to another vessel to further stabilize the FSO and that there is no risk of an oil spill.'

Concerns have been raised by environmental groups over the risk of spillage, which would result in contamination within the Gulf of Paria.

Environmental NGO Fishermen and Friends of the Sea warned that it could be the 'greatest environmental disaster' in the Gulf of Paria if it was not urgently addressed.

Conservation group Fishermen and Friends of the Sea (FFOS) is warning of the 'greatest environmental disaster' in the Gulf of Paria, due to the Venezuelan Floating Storage Offloading (FSO), the Nabarima, which was said to be in an emergency situation.

In a statement Thursday FFOS called on government to reach out and assist:

'Our greatest nightmare is here! The Venezuelan FSO (Floating Storage Offloading), the Nabarima, a vessel containing approximately 1.3Million barrels of crude oil is sinking in our Gulf of Paria.'

'PM Rowley, your Minister of Energy Franklin Khan is silent and is not acting transparently. Now that Minister Khan is aware of the situation, he has not responded to our many appeals and several calls from the Media for clarification.'

'Primary stakeholders are waiting in anticipation for this disaster to be resolved, yet Minister Khan continues to be dead silent, trusting the promises of a notoriously questionable Maduro Regime that everything is ok and that the vessel is “upright and in a stable condition”.'

'At the same time, the Maduro Regime has issued a release yesterday morning stating that they are about to begin evacuation of all of the crude oil stored on the vessel.'

'If the vessel is upright and stable, why then is the Venezuelan Government hastily attempting to remove the 1.3M barrels of crude oil? Someone is lying! FFOS have asked for first hand verification, and that our Coast Guard vessel to visit and confirm the status of the Nabarima.'

Minister of Energy and Energy Industries, Franklin Khan, told Loop News that the situation was being closely monitored, adding that the ship was in an upright and in stable condition, pending preparation for the transfer of the cargo to a contracted vessel.

The FFOS referred to a New York Times report which indicated that the vessel had sunk about 14 meters at the waterline due to excess weight.

'PM Rowley must be made aware that if this vessel sinks, our Gulf of Paria will turn into a dead contaminated sea and his Government will be complicit in their negligence.'

'FFOS call on PM Rowley for an immediate and urgent response. Clarity and transparency must be brought to this frightening situation immediately.'

'The Rowley Government must take a proactive approach and make use of the wealth of experience at their disposal in offering to lend assistance to the Maduro Regime.'

'Together we must avert what could be the greatest environmental disaster of the Caribbean.'

The Nabarima, which has been tethered at PetroSucre's Corocoro field in the Paria Gulf for the past 10 years, would transfer oil to tankers for shipment abroad, however because of various international sanctions, the transfer vessels have stopped operating and the FSO is now at full capacity.

According to a report by Argus Media, Italian company Eni, which has a 26 percent stake in PetroSucre, was seeking clearance from US sanctions authorities to transfer oil off of the vessel.

Eni said in an update Wednesday (September 2) that the FSO had been stabilized and discounted any current risk of an oil spill.