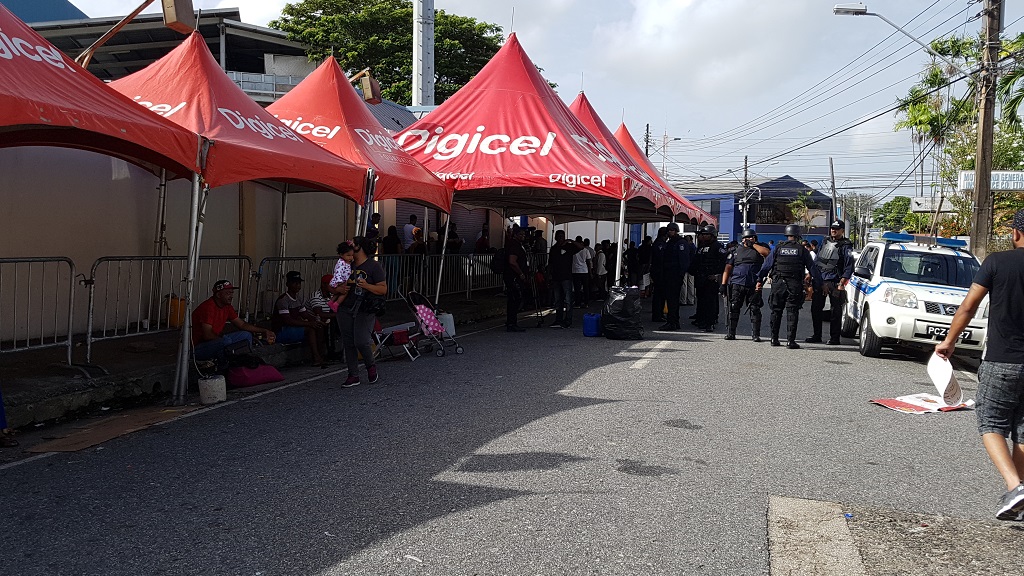 Friday marked the last day for the registration process across the country which, up to Friday morning, was not marked by any violent incidents.

Police Commissioner Gary Griffith said to media outside of the Port of Spain registration centre at the Queen's Park Oval on Friday that the process, from a security perspective, went smoothly.

“This is the final countdown. As you would have seen it was expected that there would be tens of thousands, this is not the case. We had a structure, the structure seems to have worked...There’s not a protest, there’s not mass panic that persons would not be able to be registered before the deadline at 5:00 pm.."

Griffith said numbered chits were given to applicants who did not succeed with registration and they were told to return to wait for their numbers to be called.

Griffith added that he was not aware of any extension to the registration period as that was not his purview.

However National Security Minister Stuart Young clarified that anyone still in the line to be processed after the 5:00 pm deadline will still get a chance to register.

Griffith also referred to a gathering held by Trinidadians on Thursday night in Port of Spain who called for the country’s borders to be tightened, saying that citizens should not let their emotions rule.

“It is your right to assemble but it must be within the law. You cannot let your emotions get the better of you when your democratic right could infringe upon the democratic rights of others. You must get formal permission from the Commissioner of Police, and that was not done,” Griffith said.

He said however that he allowed the gathering as the group consisted of about 40 or 50 people and posed no threat to anyone.

“We monitored the situation, it is your right to protest (however) if you want to protest you must get the permission of the Commissioner of Police,” he said.

Griffith: No violence from Venezuelans

Griffith added that although rumours circulated of protests, this would not happen on his watch.

“We heard lots of rumours, mass protest…it ain’t gonna happen on my watch. There’s a minimum force policy as you will see. We’re here to ensure that people adhere to the law, it is a show of strength but we are not here to intimidate anyone.

“The Venezuelan nationals over the past two weeks, they have not been violent, they have adhered to every single thing that we have advised them to do.

“Obviously there’s emotion and concern on both sides…I think we have done as much as we can do to ensure that this situation can be done in a humane manner."

Griffith said that following the end of registration, the Police Service would resume in enforcing the law against anyone who had entered the country illegally and was not registered.

“We got a lot of intelligence from this registration. Now that they are here, they realise that ‘I don’t have to fear’, so what we’re getting is information…all of these things could assist us in trying to (seal) our porous borders."

Griffith added that after this process, anyone without their national registration cards would be seen as an illegal immigrant and would be detained.

“Our law is clear, our law states that persons can be deported, they can be denied entry if they are a) a threat to national security or b) a liability to the public purse," he said.

Over 110,000 non-Venezuelans living in T&T illegally

Griffith mentioned that apart from Venezuelans, there are over 110,000 illegal immigrants residing in Trinidad and Tobago, however he said there will be no witch hunts.

“This is not going to be a witch hunt, it’s not about that. We have to also understand that there are over 110,000 illegal immigrants that are not Venezuelan that are living in this country.

“We can’t just go in there and start hunting but if we find these individuals based on exercises that would be conducted, we would be having operations and if persons are fund to be here illegally they would be deported,” he said.

All Venezuelans with criminal records will be deported

Griffith said after the registration process there would be follow-up process regarding criminal backgrounds and anyone with a criminal record will be detained and deported.

“If at any time, we find anyone, even if they have registration…if we have intelligence in any form or fashion that that individual is involved in criminal activity, they would be immediately red-flagged, it would be sent to the Immigration Department and they would be deported."

Griffith said security scans were done at the centres and some people were found with illegal items such as marijuana and ammunition.

The registration process, which will allow Venezuelans living in the country to work for up to one year, ends at 5:00 pm on June 14, 2019.

National Security Minister Stuart Young said earlier this week that there would be no extension of the registration process.

Following the registration process, Venezuelans have been seen at the end of each day, cleaning up and gathering waste into garbage bags, at both the Port of Spain and San Fernando registration centres.