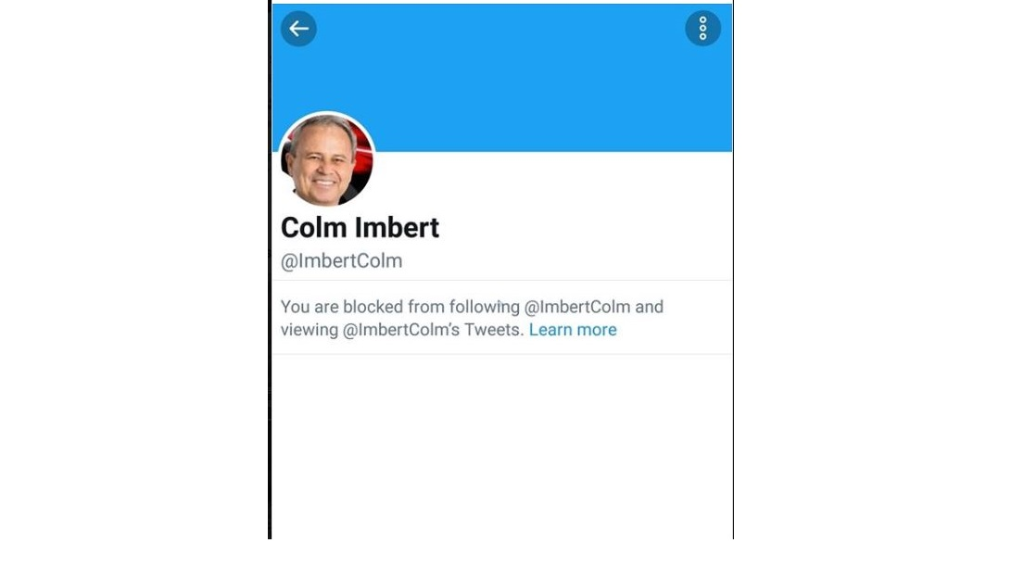 Photo: A number of people claimed they have been blocked by Finance Minister Colm Imbert after questioning or commenting in response to Tweets.

In a Newsday article, Crowne, who was also blocked by the Minister on Twitter, questioned the Minister's transparency after a number of people commented that they had been blocked.

Crowne, who is a legal advisor to the Media Association of Trinidad and Tobago (MATT) with regard to pending cybercrime legislation, said based on the nature of Imbert's Tweets, his acts may be deemed unconstitutional.

"Colm Imbert has blocked me on Twitter. It was devastating. I am not the only one however. Dozens more have been blocked by the Minister of Finance, including reporters, lawyers, persons in public relations, the list goes on. As short-sighted as the Minister’s action are, is it legal for a Government Minister to block Twitter users who may share opposing views? The answer seems to be no. Worse still, Minister Imbert’s actions may be unconstitutional," he said.

"The decision in Knight is instructive on several fronts. First, our constitution entrenches the right to “express political views” and “freedom of thought and expression” in much the same way that the First Amendment protects political speech, and speech in general, in the United States."

"Second, to qualify as a “public forum” under US law the forum must have some measure of Government control and essentially act as a venue for State speech."

Crowne said the factors determing whether speech is Government speech or private speech relies on whether these platforms are used to convey state messages, whether the speech is 'often closely identified in the public mind' and to what extent the public official “maintain[s] direct control over the messages conveyed".

Crowne said Imbert's tweets do cover public affairs, including activities within his constituency, therefore it can be considered a public forum.

"It is also not enough to say that the Government of Trinidad and Tobago does not “own” Twitter, therefore the Twitter handle (@ImbertColm) is not Government controlled."

"This too was canvassed, and rejected, in Knight," he said.

Crowne said Imbert's actions imply that Government may be trying to silence persons with opposing views.

"In the end, Minister Imbert’s actions are symptomatic of the Government’s ongoing campaign to silence dissent. Whether through the pending cybercrime legislation, groundless threats of sedition, misuse of the term “doxing” and/or routine denials of freedom of information requests, the blocking of users on Twitter is yet another way for the current Government to evade accountability and scrutiny," he said.

In a 2018 report by the UK Guardian, British immigration minister Caroline Nokes was slammed after she allegedly blocked persons on Twitter who reached out to her for assistance.

Article 4 (k) of the Trinidad and Tobago Constitution outlines "without discrimination by reason of race, origin, colour, religion or sex, the following fundamental human rights and freedoms", the freedom of the press.

A document published by the Trinidad and Tobago Integrity Commission, entitled 'Principles of Integrity for Persons in Public Life and Those Exercising Public Functions', outlined the need for transparency by public officials.

"...those in public life should always have regard for the need for public accountability, the requirements of the law, merit, independent scrutiny, equal opportunity, probity, openness and transparency and should generally ensure that their influence over appointments is not abused for partisan purposes. Those in public life should not let their political or personal preferences influence their judgement," it stated.

Additionally, the document says, "Those in public life and those in the public service in general, should not...prevent another person from gaining access to information to which that person is entitled by law."