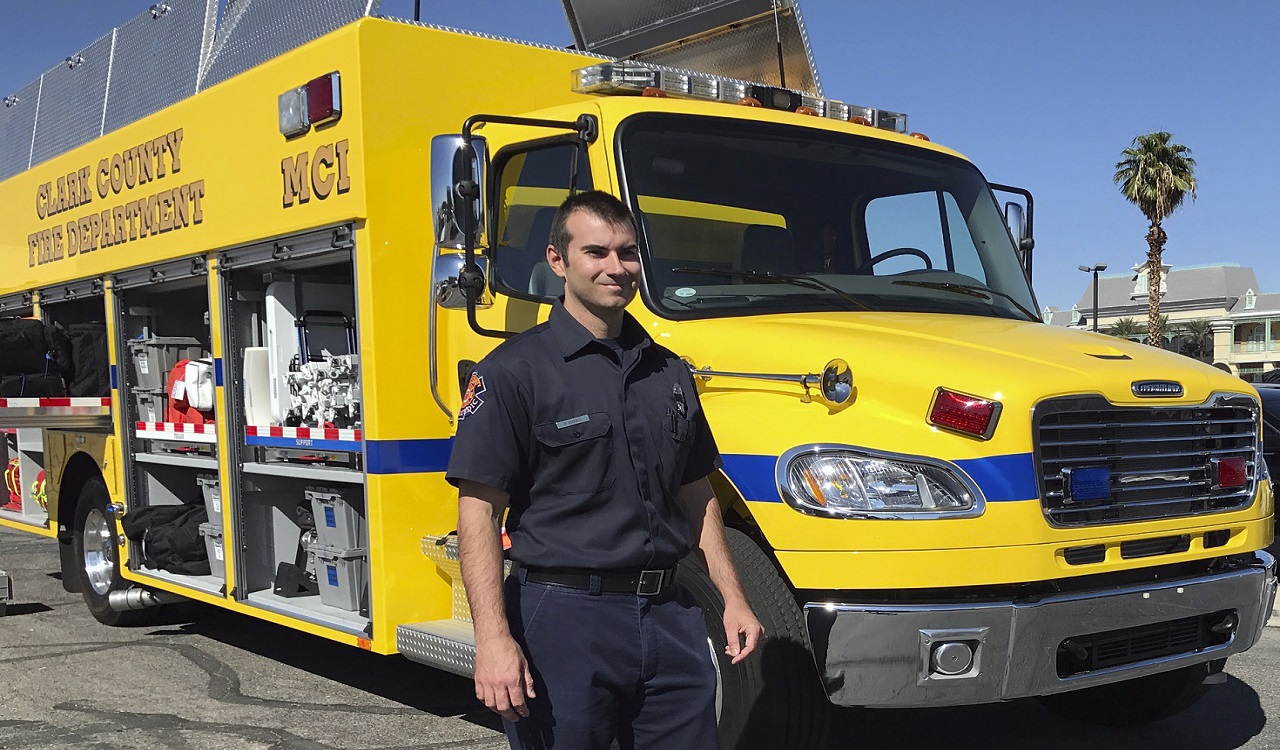 Clark County Fire Department engineer Brian Emery stands by one of his agency's Mass Casualty Incident vehicles in Las Vegas on Thursday, Oct. 5, 2017. Emery was driving a traditional fire engine the night of the shooting when his crew wound up being among the first on duty emergency workers to arrive at the scene on Sunday.

Fire engineer Brian Emery was driving his station's engine back from a call for a minor car crash when hundreds of hysterical people began swarming the vehicle near an outdoor country music festival in Las Vegas.

"Then, suddenly, we heard automatic gunfire," Emery recalled Thursday after his crew became the first to respond to the deadliest shooting in modern American history.

It was pure coincidence that the Clark County Fire Department crew members on Engine 11 — Emery, team leader Capt. Ken O'Shaughnessy and two firefighters, including a rookie — were the first on-duty emergency personnel to arrive Sunday night.

Emery said the surge of people forced him to stop the firetruck just a few blocks from the outdoor venue where Stephen Paddock unleashed gunfire from the 32nd floor of the Mandalay Bay hotel and casino just after 10 p.m.

"There were so many people around us, initially I couldn't drive out of there," Emery said.

Finally, there was a break in the crush of people and he inched the engine to a parking area. The crew began treating patients brought by concertgoers, which including off-duty emergency workers.

"After my 15 years as a paramedic, it was just automatic," he said. "You just go to work and do what you know how to do."

Over the next hours, the crew treated some 30 people with a range of injuries, including those who had been stepped on and crushed in the frantic crowd but largely gunshot victims struck by high-caliber fire.

They put the wounded in whatever vehicles passed by — patrol cars or private vehicles.

Meanwhile, the Clark County Fire Department started getting the first of 32 calls from multiple locations about people with gunshot wounds — from different hotels in the area, hospitals, a restaurant.

Fire Chief Greg Cassell said it took dispatchers a few minutes to understand that all the calls were connected to the same incident, "so that complicated our response."

Cassell said that some 160 fire personnel arrived before long. Some, like Deputy Fire Chief Joe Klassen, were called in from home, in his case awakened by text messages from the department and a frantic call from an ambulance driver friend. Once there, he helped lead arriving teams on the ground.

"Fortunately, I had my uniform pressed and ready for Monday morning," he said.

After setting up, Klassen said many off-duty firefighters and police officers approached him to offer help, hailing from places such as California, New Mexico and New York.

Emery's engine crew, meanwhile, kept working on the wounded until after the sunrise, heading back to their station just 400 feet from the iconic Las Vegas sign around 7 a.m.