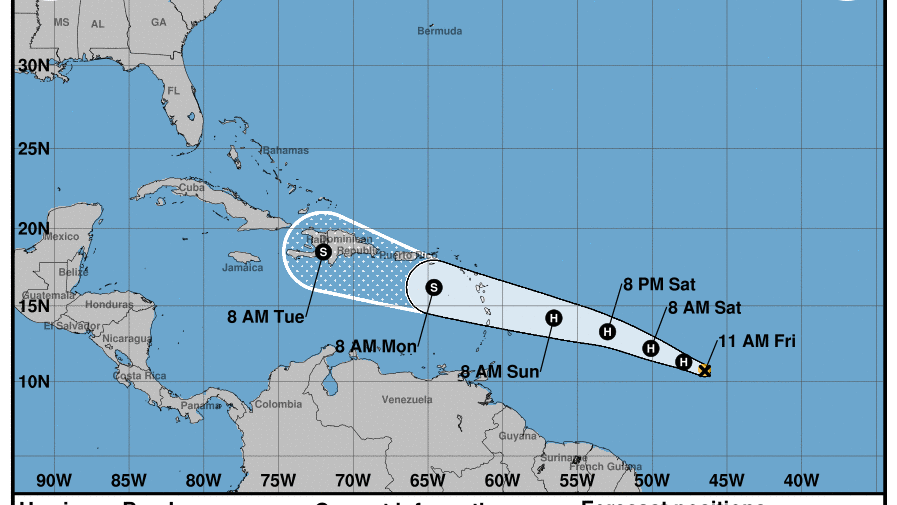 Hurricane Beryl, the first hurricane of the Atlantic season, is heading for the Lesser Antilles, estimated to hit the region between late Sunday and Monday.

Islands in its path may need to issue hurricane watches from Friday night, while tropical-storm-force winds are likely to begin over some of the islands by Sunday evening. 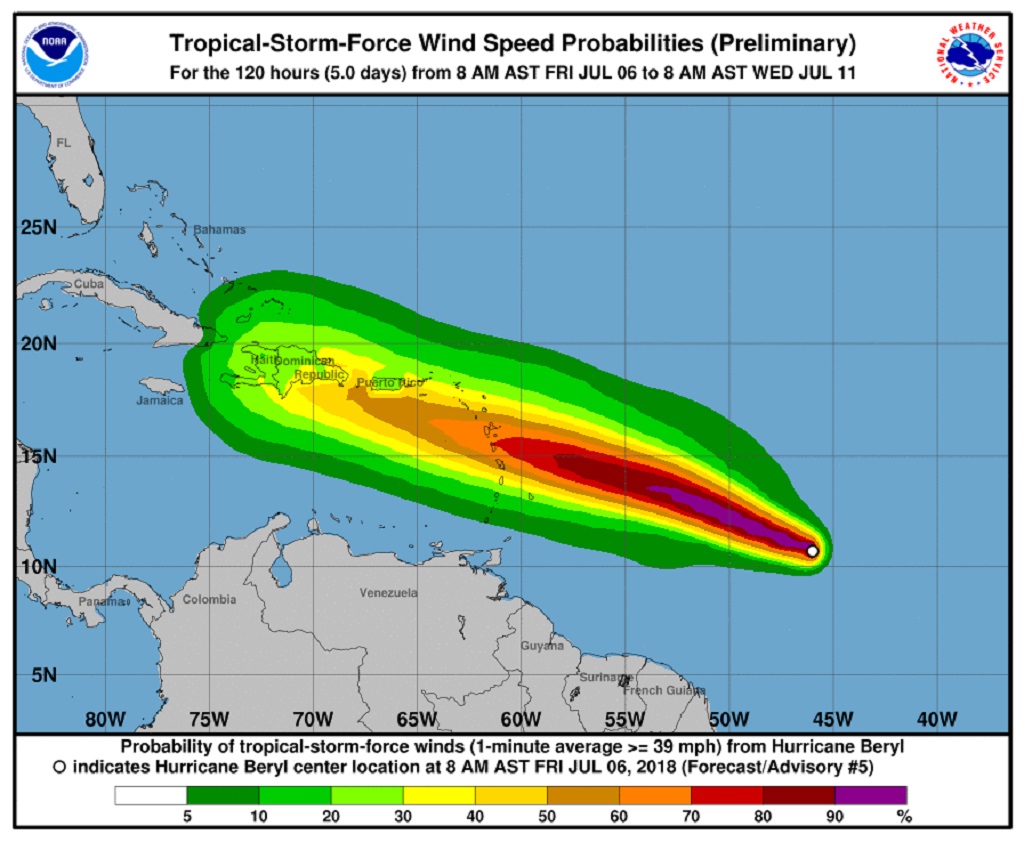 Information is as follows:

There are no coastal watches or warnings in effect.

Interests in the Lesser Antilles should monitor the progress of Beryl, as hurricane watches could be needed for some of the islands by tonight.

A faster westward to west-northwestward motion is expected to begin over the weekend and continue through early next week.

On the forecast track, the center of Beryl will approach the Lesser Antilles over the weekend and cross the island chain late Sunday or Monday.

Maximum sustained winds have increased to near 80 mph (130 km/h) with higher gusts.  Additional strengthening is forecast during the next couple of days, and Beryl is expected to still be a hurricane when it reaches the Lesser Antilles late Sunday or Monday.

Weakening is expected once Beryl reaches the eastern Caribbean Sea on Monday, but the system may not degenerate into an open trough until it reaches the vicinity of Hispaniola and the central Caribbean Sea.

The Trinidad and Tobago Meteorological Service issued an Adverse Weather Warning for Saturday morning, during which the country may experience heavy showers in varying localities as well as thunderstorms in a few areas.

Gusty winds and street or flash flooding are likely in areas of heavy showers.

The Met Office assured the public that Trinidad and Tobago is not under any Tropical Storm watch or warning.

Saffir-Simpson Scale of Winds
(Hurricane Category, Sustained Winds and the Type of Damage due to Winds)

Category 1 (Sustained Winds of 64-82kts; 74-95 mph; 19-153km/h)
Very dangerous winds will produce some damage: Well-constructed frame homes could have damage to roof, shingles, vinyl siding and gutters. Large branches of trees will snap and shallowly rooted trees may be toppled. Extensive damage to power lines and poles likely will result in power outages that could last a few to several days.

Category 2 (Sustained Winds of 83-95 kts; 96-110 mph; 154-177 km/h)
Extremely dangerous winds will cause extensive damage: Well-constructed frame homes could sustain major roof and siding damage. Many shallowly rooted trees will be snapped or uprooted and block numerous roads. Near-total power loss is expected with outages that could last from several days to weeks.

Category 3 (Sustained Winds of 96-112 kts; 111-129 mph; 178-208 km/h)
Devastating damage will occur: Well-built framed homes may incur major damage or removal of roof decking and gable ends. Many trees will be snapped or uprooted, blocking numerous roads. Electricity and water will be unavailable for several days to weeks after the storm passes.

Category 4 (Sustained Winds of 113-136 kts; 130-156 mph; 209-251 km/h)
Catastrophic damage will occur: Well-built framed homes can sustain severe damage with loss of most of the roof structure and/or some exterior walls. Most trees will be snapped or uprooted and power poles downed. Fallen trees and power poles will isolate residential areas. Power outages will last weeks to possibly months. Most of the area will be uninhabitable for weeks or months.

Category 5 (Sustained Winds of 137 kts or higher; 157 mph or higher; 252 km/h or higher)
Catastrophic damage will occur: A high percentage of framed homes will be destroyed, with total roof failure and wall collapse. Fallen trees and power poles will isolate residential areas. Power outages will last for weeks to possibly months. Most of the area will be uninhabitable for weeks or months.