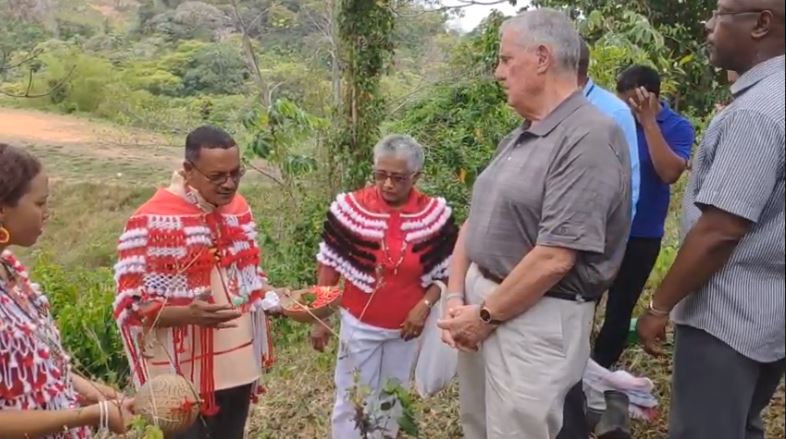 The Arima First Peoples celebrated Earth Day 2019 with a prayer and tree planting ceremony on Wednesday.

They were joined by US Ambassador Joseph Mondello and US Embassy Representative for Arima, Monica Morse at the location which is earmarked for the First Peoples Heritage Village.

Mayor Lisa Morris Julian and the borough council told the US Ambassador that they plan to work toward keeping Arima a green place.

“The reason why Arima is so resilient is because we practice what the First Peoples preach which is ‘Love the land; love the environment and as long as you take care of the land, the land will take care of you.”

Chariman of the Council’s Environment, Beautification and Recycling Committee, Bertiney Pollidore said the council recently embarked on a curbside recycling initiative because the Mayor’s vision is to ensure that Arima goes green.

Meanwhile, Chief of the Santa Rosa First Peoples, Ricardo Bharath, said the visit and planting of the tree in commemoration of Earth Day was significant to indigenous people because of their strong connection to the earth and environment.

The Chief noted that Ambassador Mondello’s arrival to Trinidad was on October 14th which is the day of Recognition for the First Peoples.

As a token of appreciation, he presented Ambassador Mondello with a spear which represents the hero and war chief Hyarima.

Ambassador Mondello planted a bay leaf tree which is used in traditional medicine and in the First Peoples worship.