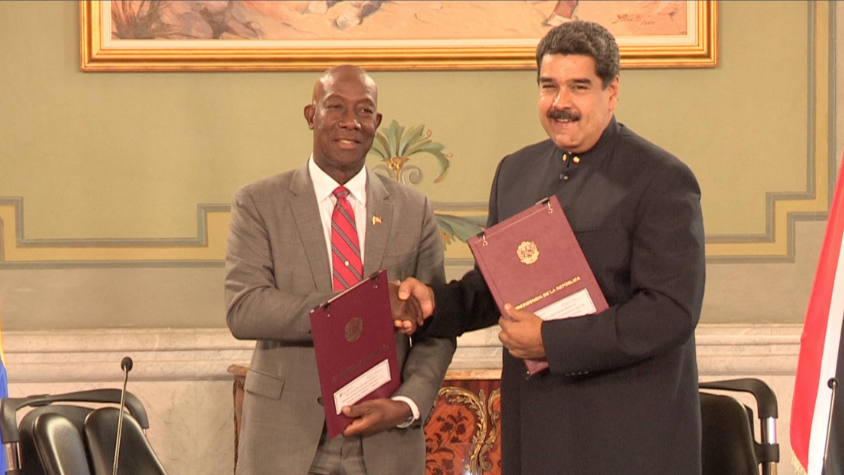 On August 25, 2018, an historic agreement was made between Prime Minister Dr Keith Rowley and Venezuelan President Nicolás Maduro for the importation of methane gas from Venezuela's Dragon Field.

Here are five things to know about the Dragon Field gas deal:

It's expected that production from Venezuela's four fields which comprise the Mariscal Sucre project – Mejillones, Rio Caribe, Dragon and Patao – will reach 1.2 billion cubic feet per day of natural gas and 28,000 barrels per day of condensates, and will be directed primarily toward export.

2. Gas to be transported via 17km gas pipeline

The gas will be transported to the Hibiscus platform off the north-west coast of Trinidad, about 17 kilometres from the gas field. Hibiscus is jointly owned by the T&T government (NGC) and Shell.

In March 2017, Shell signed an agreement with NGC and PDVSA to build a 17km pipeline from the Dragon Gas Field to the Hibiscus platform.

Details of the deal are 'confidential', according to Dr Rowley, but he said the agreed-upon price was 'competitive'.

According to a release from PDVSA Minister of Popular Power of Petroleum and president of Petróleos de Venezuela, SA (PDVSA), Manuel Quevedo, will travel to Trinidad and Tobago to pursue agreements for 'a comprehensive oil association and gas at all levels, with the idea of boosting the full potential of both nations in terms of energy'.

4. Dragon Field's gas to be used for petrochemical products

In the first phase, the gas from the Dragon will boost the country’s gas supply for both the LNG and the petrochemical sectors. T&T plans to expand domestic gas production to 4.14 Bcf/d by the end of 2021.

Finance Minister Colm Imbert said the pipeline project for the Dragon Field gas deal is estimated to cost US$1 billion.

"A pipeline, to be built at a cost of $1 billion, will be owned in a joint venture company between the National Gas Company and Shell Trinidad. The pipeline will transport the natural gas from Eastern Venezuela to the Hibiscus Platform off the North Coast which is owned by Shell Trinidad."

First gas from Dragon is expected in 2020.