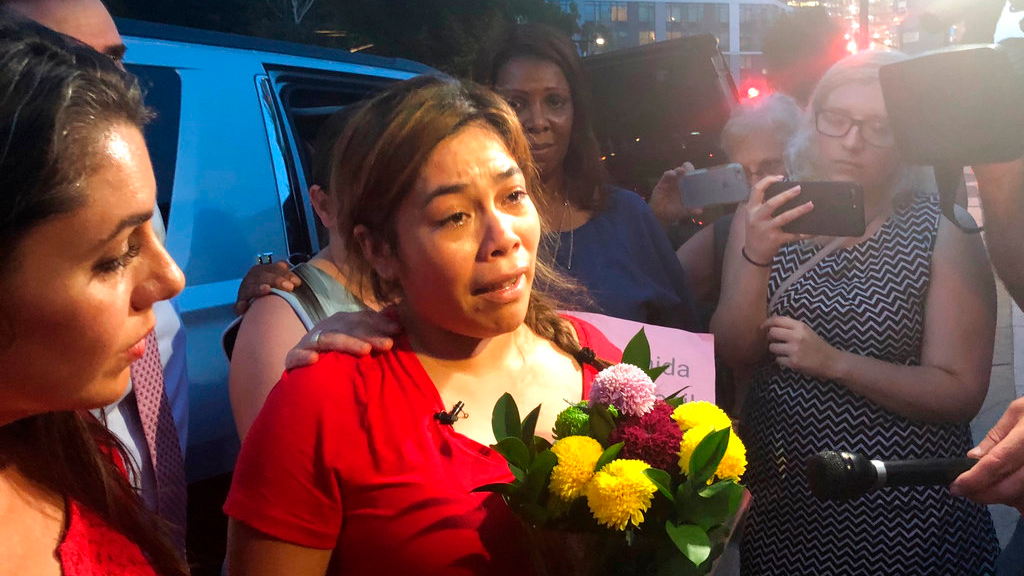 Yeni Gonzalez speaks to reporters in New York on Monday, July 2, 2018. Gonzalez, from Guatemala, was separated from her three children on the U.S.-Mexico border more than a month ago. She plans to reunite with them Tuesday at an East Harlem center for immigrant children. (AP Photo/Claudia Torrens)

A Guatemalan mother who was separated from her three children at the U.S.-Mexico border said she was overjoyed following their reunion on Tuesday at a social services center.

"I am very happy and thankful to God" and to supporters, a teary-eyed Yeni Gonzalez said after the private meeting in New York at the Cayuga Center, the agency that placed 6-year-old Deyuin, 9-year-old Jamelin and 11-year-old Lester in foster care.

Gonzalez, 29, was released from Eloy Detention Center in Arizona last week and was driven cross-country by a team of volunteers. A group of New York-area parents and artists raised money through crowdfunding to cover her $7,500 bond and the trip expenses.

More than 2,000 children have been taken from their families at the border in recent weeks and scattered in different states under President Donald Trump's zero-tolerance policy, which criminally prosecutes adults caught crossing the border illegally. But amid an international outcry, Trump last week issued an executive order to stop the separation of immigrant families at the border.

Gonzalez arrived in New York on Monday and was greeted by supporters near Central Park and in Long Island City, places where she made stops.

On Tuesday, after the reunion, Gonzalez spoke on the street in front of the center and said she was happy to find her children in good condition. Her lawyer, Jose Xavier Orochena, said the children cried during the meeting and they all hugged each other. The family was separated on May 19.

Gonzalez had arrived at the center accompanied by supporters, including Democratic U.S. Rep. Adriano Espaillat.

A relative of Gonzalez who lives in North Carolina has applied to become the children's sponsor, but the application process, which includes fingerprint results, could take two months, Orochena said. Every adult living in a child's house must be included in the sponsorship petition so the process is lengthy, he said. Gonzalez will also apply to become a sponsor, even though she has no income, no legal status and no home of her own, he said.

Orochena and Espaillat called for a faster process of reunification between parents and children.

"We want to make sure that more of these stories become a reality," Espaillat said.

For the moment, the Guatemalan mother will be able to see her children at the Cayuga Center during the day, but she won't be able to live with them.

Gonzalez, who is applying for asylum, had a message for the rest of the women who were detained with her at the border.

"We all shared so many sad stories," she said. "I want them to know that there are many people willing to help them. It is not easy. I wish you all the luck."

U.S. Attorney General Jeff Sessions has said the Republican president's immigration policy is a step forward for police and public safety in general.