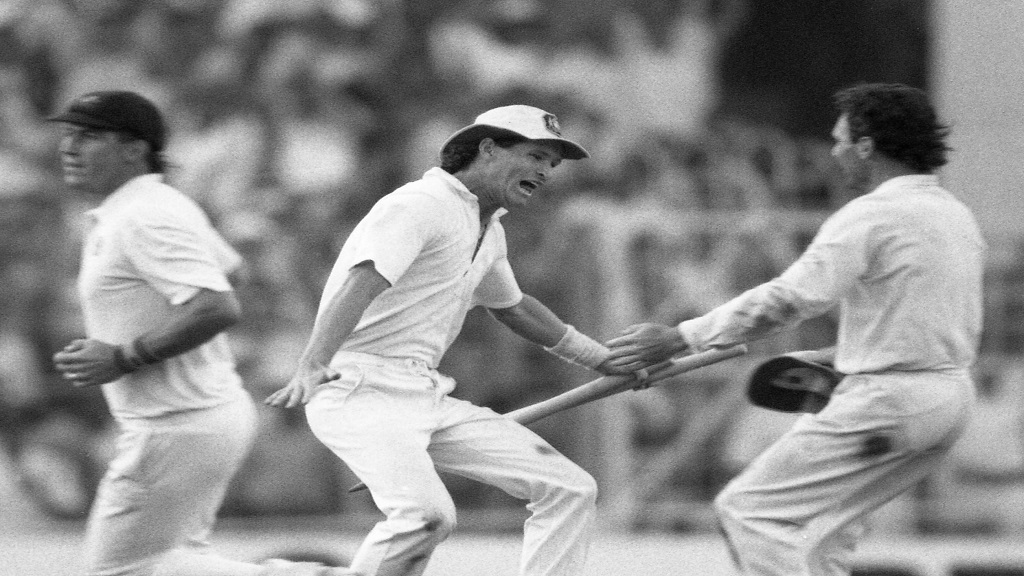 In this Nov. 8, 1987 file photo, Australian batsman Dean Jones holds the stumps as he races to embrace team captain Allan Border, right, in a moment of jubilation, in Calcutta, India. Jones has died of an apparent heart attack while in India to commentate on the Indian Premier League, it was reported on Thursday, Sept. 24, 2020. (AP Photo/Liu Heung Shing, File).

Former Australia batsman Dean Jones has died at the age of 59.

The International Cricket Council (ICC) said Jones suffered a heart attack in Mumbai, where he was working as a commentator on the Indian Premier League (IPL), on Thursday.

The IPL expressed sorrow at the news, in a statement that read: "We are extremely shocked and sad to learn of the untimely demise of Mr Dean Jones. His energy and enthusiasm for the game will be truly missed. Our thoughts with his family, friends and his followers in this hour of grief."

Former Australia head coach Darren Lehmann was among the many to pay tribute to Jones, who played 164 ODIs and 52 Test matches in a successful career.

Lehmann wrote on Twitter: "So sad. RIP legend and love to his family, our thoughts are with them all xxxx"

The Victorian made 11 Test centuries and seven hundreds for Australia in one-day cricket, also crafting 60 half-centuries for his country.

Jones showed his incredibly strong character by scoring a magnificent 210 in hot and humid conditions in a tied Test with India in 1986.

He also struck a brilliant 216, his highest Test score, against a formidable West Indies attack in Adelaide three years later.

Cricket Australia chairman Earl Eddings paid an affectionate tribute, saying: "Dean Jones was a hero to a generation of cricketers and will forever be remembered as a legend of this great game.

"Anyone who watched cricket in the 1980s and 1990s will fondly recall his cavalier approach at the crease and the incredible energy and passion he brought to every game he played."

Eddings added: "Jones remained an immensely popular figure in Australian and Victorian cricket throughout his life and was a much-loved columnist and commentator in every corner of the cricketing world.

"This is a truly sad day. Deano's loss will be felt not just at home in Australia, but across the globe. Our thoughts and best wishes are with his wife Jane and daughters Isabella and Phoebe."