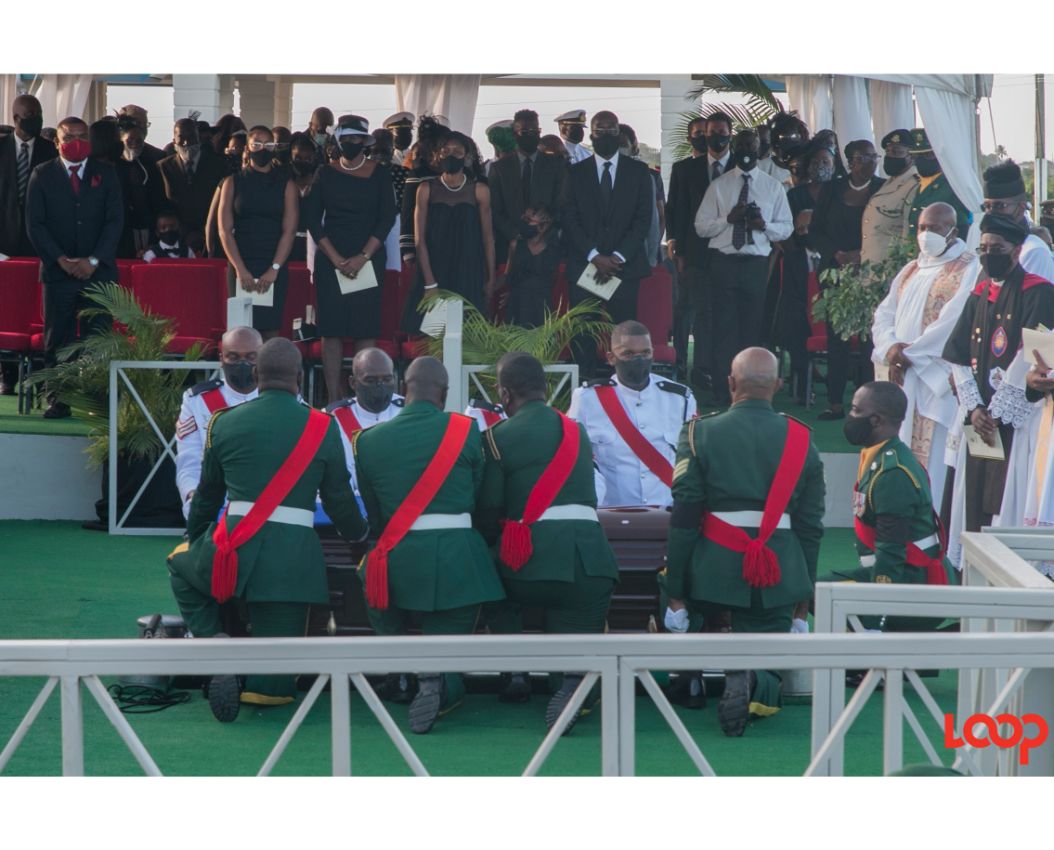 On Friday (August 14), the streets of the northern parish in Barbados were lined with a multitudes of people who came out to receive him one final time as they bid their last farewell to son of the soil, Professor The Right Honourable Owen Seymour Arthur.

After lying in state for two days earlier this week, the body of the former Prime Minister of Barbados was transported from Lyndhurst Funeral home through The City and onto St Peter Parish Church for a two-hour-long state funeral service before moving on to its final resting place at the Mount Pleasant Memorial Gardens, a  26-acre cemetery in the same parish.

As his casket, draped with the Barbados flag, made its way from Battaleys to Queen’s Street, Speightstown, scores of onlookers vied for every available vantage point, some sheltering from the sweltering heat under umbrellas. They came out to behold the pageantry of the armed and unarmed forces who made up the cortege. Several students from Alexandra and Coleridge and Parry, outfitted in their respective uniforms, also lined the streets.

Prime Minister Mia Amor Mottley and members of Cabinet joined the procession just outside Alexandra School as it made its way to the St Peter Parish church for the funeral service.

At the conclusion of the service, dignitaries and Bajans alike, followed the cortege as it made its way uphill to the expansive cemetery grounds which overlooked the childhood neighbourhood of Benn Hill where the former PM grew up.

Many lined the streets along the route in an attempt to pay their final respects to the homegrown Member of Parliament who once represented their parish.

A minute-stop was made in Benn Hill, where the cortege paused outside his childhood home in revered silence.

Upon arrival at the burial grounds, the casket was transferred from the hearse and placed over the grave. Shortly after, army and police pallbearers folded the flag which adorned his casket it was presented to Arthur’s widow, Julie.

The final rites were read and a gun salute followed before the mahogany casket was lowered to its final resting place just after 5.30 pm.

Officers of the Coast Guard capped the grave with a carpeted cover after which Julie Arthur laid the first wreath on the former PM’s grave. Prime Minister Mottley and Arthur’s daughters Leah and Sabrina followed suit.

In a touching scene, his granddaughter, Isabella, held out her hands in anticipation as she received the wreath which she placed on her grandfather’s grave, assisted by her mother. She bid a final farewell to him with a tiny wave as she left her place at the graveside.

Other dignitaries and family members placed their wreaths before the burial service drew to a close just before 6 pm.

PHOTOS: PM Mottley thanks Owen Arthur for his 'courageous leadership'