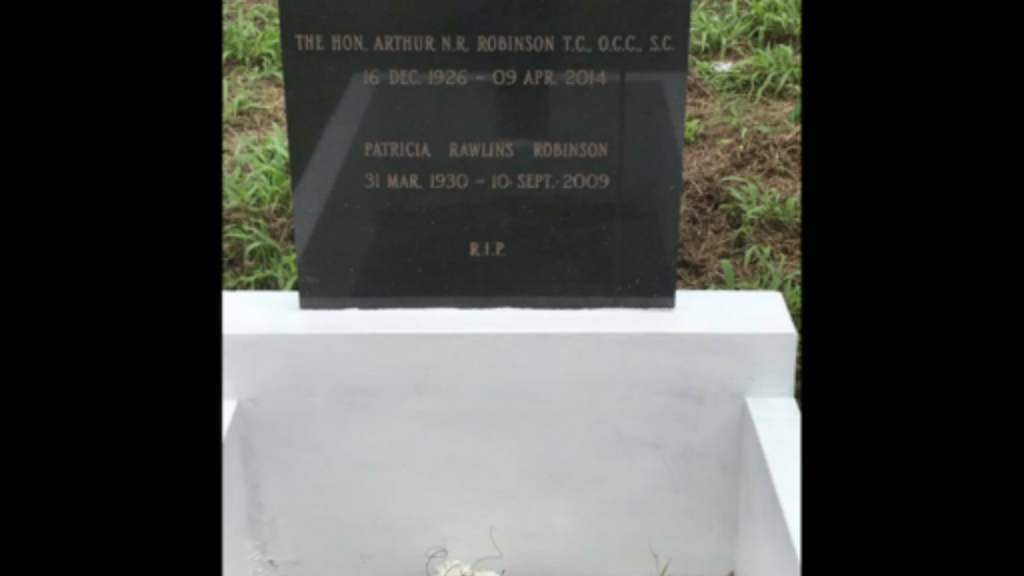 The grave of former President and Prime Minister of Trinidad and Tobago, Arthur NR Robinson received a much needed facelift on Saturday. Photo via Facebook, Kevan Gibbs.

Just three days after the deplorable condition of the grave site of the country's third President, Arthur NR Robinson, was highlighted on social media, a group of persons including Tobago Organisation of the People (TOP) leader Ashworth Jack have spruced it up.

The condition of the grave site was brought to national attention when activist Wendell Eversely, a survivor of the 1990 attempted coup, visited Robinson's grave on the occasion of the 27th anniversary of the coup.

Eversley slammed Government's and the Tobago House of Assembly's failure to upkeep the grave site of the former Prime Minister and former President.

On Saturday, UNC Alderman at the Tunapuna Piarco Regional Corporation, Kevan Gibbs, visited the grave and gave it a fresh coat of paint.

Gibbs was assisted by Jack and a woman identified as Natalie Day.

In a post to his Facebook page, the UNC Alderman urged the THA to do better for the country's third President.

"The THA should be doing something more for a man that gave his mind, body and soul to all of Trinidad and Tobago. How we treat our past leaders, elderly and dead is a reflection of how we are as a people. #WeCanDoMore #Tobago #July27th1990"

He served as this country's third President and was also Trinidad and Tobago's third Prime Minister.

Robinson was a Tobagonian by birth and a founding member of the People's National Movement (PNM).

During the 1990 coup attempt by the Jamaat al Muslimeen, Robinson famously ordered the army to "attack with full force," an action which led to him being beaten and shot in the leg.