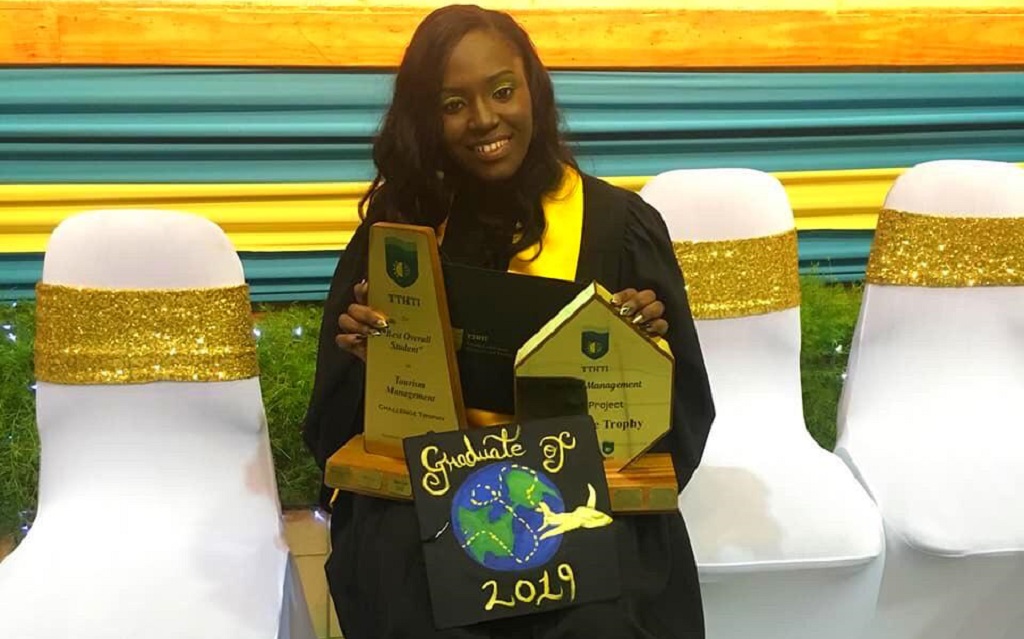 Have you ever felt so overwhelmed that you considered suicide?

That was 23-year-old Carlene Philip’s experience before she persevered to graduate at the top of her class at the Trinidad and Tobago Hospitality and Tourism Institute (TTHTI).

Originally from Edward Trace, Basse Terre, Moruga, Carlene attended Cowen Hamilton Secondary School. On completion of her Caribbean Examination Council Exams, she graduated with four subjects; Mathematics (3), Principles of Business (3), Integrated Science (3) and Physical Education (2). She struggled to get jobs and opted to re-sit the English exam, finishing with a grade (2). That did little to assist her in finding substantial employment.

“From 2013 to 2016, I wasn’t getting any jobs. I was looking for jobs, I dropped in my resume and stuff and I still was not getting any jobs. I wasn’t even getting called back and even if I was called back, it would have been like a small-end job like, store work or something, and it would have been for a short period like two weeks, one week, some days, here, there and I was just getting fed up of home.”

Desperate to make a name for herself, she considered attending different schools and found herself somewhat interested in TTHTI’s tourism programme. According to Carlene, it was simply an “experiment”.

However, she immediately fell in love with her courses and began to excel. She had rough times, one of which was adapting to her new environment; it was the first time Carlene had lived outside of her densely populated village. Some days, she survived with no food or money.

“I doubted myself a lot of times seeing all those ‘town’ girls and hearing of their educational and family backgrounds as well as travel experiences while I had never even been to Tobago at that time. It was intimidating.”

Dealing with a heavy workload and life’s challenges also threatened to push Carlene over the edge. She told Loop News that she never really gave anyone details on how far.

During those difficult moments, Carlene says she leaned on God.

“Something told me to call a girl named Shadane to pray for me and I did. From that prayer, I started to feel lighter. I started to feel a lot better and then I would have cried that night. Crying helps me a lot. Shadane was an angel at that point in time.”

Labelling herself a ‘very spiritual person’, she explained that even before starting college, she had prayed and asked God for direction. According to Carlene, she got a vision of herself sitting in a classroom being illuminated by a spotlight from heaven. That memory reassured her that she was right where she belonged.

The 23-year-old was accepted at the Johnson and Wales University in Miami for a Bachelors Degree in Tourism Management but was unable to begin as the programme costs over US$50,000 annually. Carlene says her next best option is to attend the University of the West Indies St Augustine Campus.

Still positive, she is urging young girls to focus on their dreams and take the necessary steps to achieve them.

“I would tell them get out of their comfort zone and go towards their dreams. It's okay to get tired but never give up. Explore, innovate and learn.”