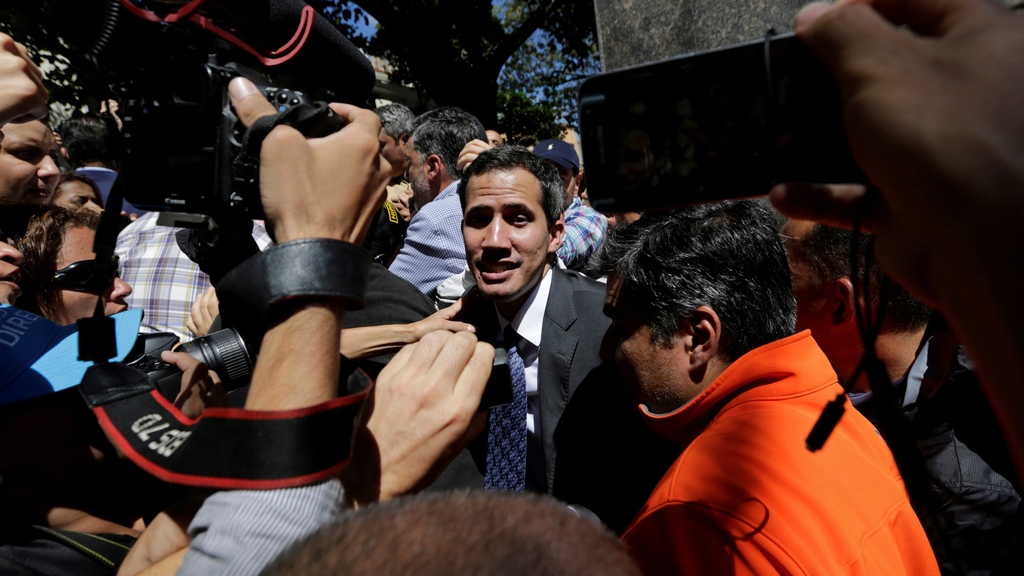 Supporters of opposition leader Juan Guaido and the press gather around him as he leaves a public plaza where he spoke in Caracas, Venezuela, Friday, Jan. 25, 2019. The 35-year-old lawmaker's whereabouts had been a mystery since he was symbolically sworn in Wednesday before tens of thousands of cheering supporters, promising to uphold the constitution and rid Venezuela of Maduro's dictatorship. (AP Photo/Fernando Llano)

(AP) Germany, France and Spain said they are ready to recognise Juan Guaido as Venezuela’s interim president if elections are not called within eight days.

President Emmanuel Macron tweeted Saturday in French and Spanish that "the Venezuelan people should be able to freely decide their future." He said France is working with European partners to encourage a "political process" that would solve Venezuela's leadership crisis.

Sanchez said on Saturday that "Spain is giving the government of Nicolas Maduro eight days to convoke free, transparent and democratic elections, and if that does not occur, Spain will recognise Juan Guaido as the president charged with carrying out said elections."

Sanchez added that as leader of Venezuela's National Assembly, Guaido is "the person who should lead the transition to free elections."

Sanchez says that his government wants the other 27 members of the European Union to back its position.

A spokeswoman from the German government tweeted the same message shortly after the comments from Madrid and Paris.

Guaido proclaimed himself interim president on Wednesday during a march of hundreds of thousands in Caracas.

The United Nations Security Council is meeting later Saturday to discuss Venezuela after Guaido declared himself the interim president of Venezuela on Wednesday, setting off a standoff with President Nicolas Maduro. The United States and other countries immediately recognized Guaido as president, while Maduro accuses opponents of staging a coup