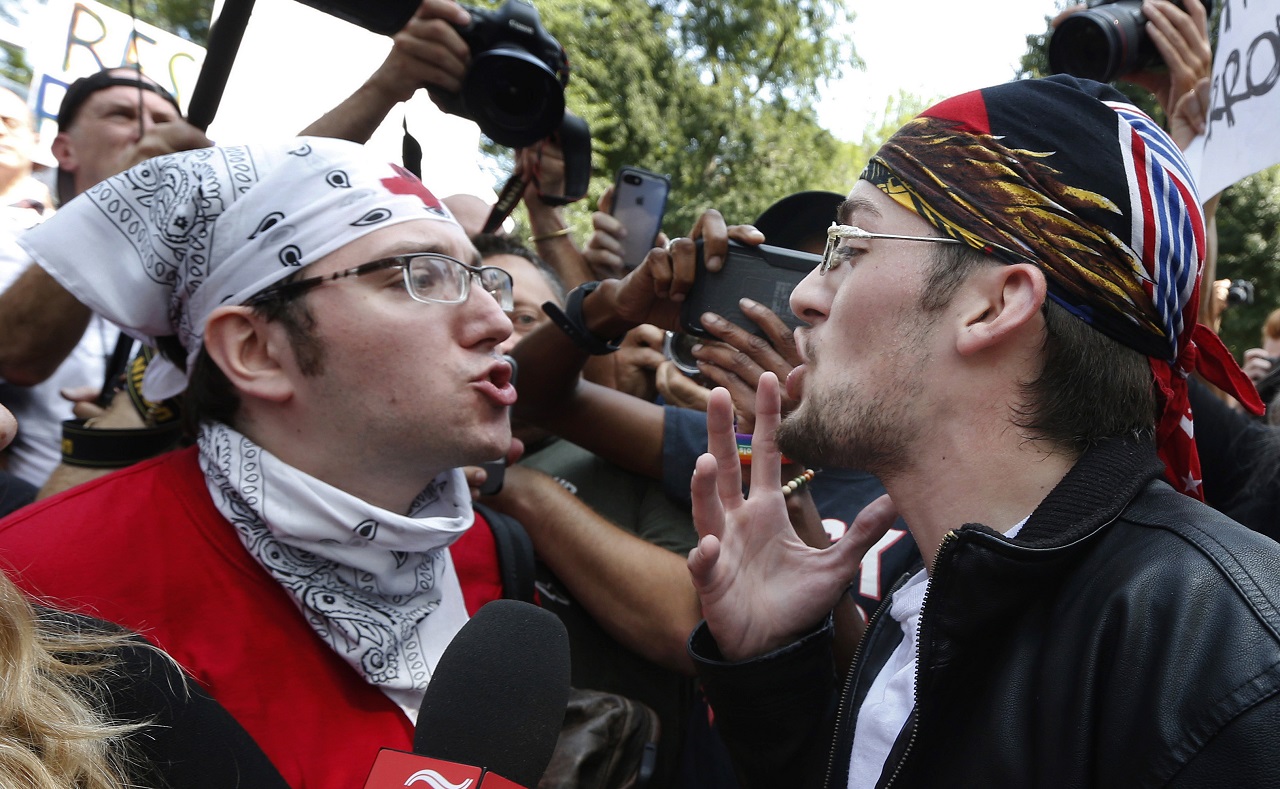 A counterprotester, left, confronts a professed supporter of President Donald Trump at a "Free Speech" rally by conservative activists on Boston Common, Saturday, Aug. 19, 2017, in Boston.

Thousands of demonstrators chanting anti-Nazi slogans converged Saturday on downtown Boston in a boisterous repudiation of white nationalism, dwarfing a small group of conservatives who cut short their planned "free speech rally" a week after a gathering of hate groups led to bloodshed in Virginia.

An estimated 15,000 counterprotesters marched through the city to historic Boston Common, where many gathered near a bandstand abandoned early by conservatives who had planned to deliver a series of speeches.

Police vans later escorted the conservatives out of the area, and angry counterprotesters scuffled with armed officers trying to maintain order.

Organizers of the midday event, billed as a "Free Speech Rally," have publicly distanced themselves from the neo-Nazis, white supremacists and others who fomented violence in Charlottesville on Aug. 12. A woman was killed at that Unite the Right rally, and scores of others were injured, when a car plowed into counterdemonstrators.

Opponents feared that white nationalists might show up in Boston anyway, raising the specter of ugly confrontations in the first potentially large and racially charged gathering in a major U.S. city since Charlottesville. But only a few dozen conservatives turned out for the rally on historic Boston Common — in stark contrast to the estimated 15,000 counterprotesters — and the conservatives abruptly left early.

One of the planned speakers of the conservative activist rally said the event "fell apart."

Congressional candidate Samson Racioppi, who was among several slated to speak, told WCVB-TV that he didn't realize "how unplanned of an event it was going to be."

Some counterprotesters dressed entirely in black and wore bandannas over their faces. They chanted anti-Nazi and anti-fascism slogans, and waved signs that said: "Make Nazis Afraid Again," ''Love your neighbor," ''Resist fascism" and "Hate never made U.S. great." Others carried a large banner that read: "SMASH WHITE SUPREMACY."

"I came out today to show support for the black community and for all minority communities," said Rockeem Robinson, 21, a youth counselor from Cambridge.

He said he wasn't concerned about his personal safety because he felt more support on his side.

Katie Griffiths, 48, a social worker also from Cambridge, who works with members of poor and minority communities, said she finds the hate and violence happening "very scary."

"I see poor people and people of color being scapegoated," she said. "Unlearned lessons can be repeated."

TV cameras showed a group of boisterous counterprotesters on the Common chasing a man with a Trump campaign banner and cap, shouting and swearing at him. But other counterprotesters intervened and helped the man safely over a fence into the area where the conservative rally was to be staged. Black-clad counterprotesters also grabbed an American flag out of an elderly woman's hands, and she stumbled and fell to the ground.

Yet Saturday's showdown was mostly peaceable, and after demonstrators dispersed, a picnic atmosphere took over with stragglers tossing beach balls, banging on bongo drums and playing reggae music.

The Boston Free Speech Coalition, which organized the event, said it has nothing to do with white nationalism or racism and its group is not affiliated with the Charlottesville rally organizers in any way.

"We are strictly about free speech," the group said on its Facebook page. "We denounce the politics of supremacy and violence."

Dating to 1634, Boston Common is the nation's oldest city park. The leafy downtown park is popular with locals and tourists and has been the scene of numerous rallies and protests for centuries.

Rallies also were planned in cities across the country, including Dallas, Atlanta and New Orleans.

Hundreds of people gathered at City Hall in Austin, Texas, Saturday morning, holding signs in support of racial equality. The Austin American-Statesmen reported organizers for the Rally Against White Supremacy estimated about 1,200 people were in attendance.