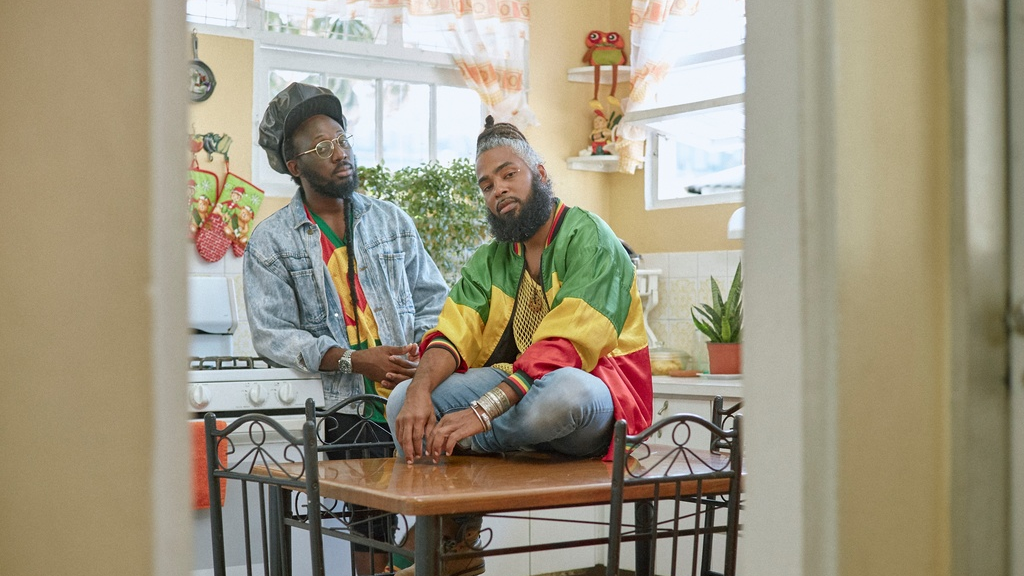 If you have been a fan of Freetown Collective, you would know their mission is to spread messages of love and inspire change through their music.

Regardless of the genre, their aim remains the same.

But when they decided to test the soca waters eight years ago to do what they do, the producer they approached shut them down.

“The very first time we went to a producer to do soca, the man say I hope allyuh know allyuh can’t come here and not sing about bam bam and rag and all them thing. He basically said you have to put that vibe; that is the energy of soca. And we did something that was so left field for him that it never came out, he wasn’t having it,” says Muhammed Muwakil, one half of the group.

Fast forward to Carnival 2020 and Freetown has one of the most talked-about songs of the season. 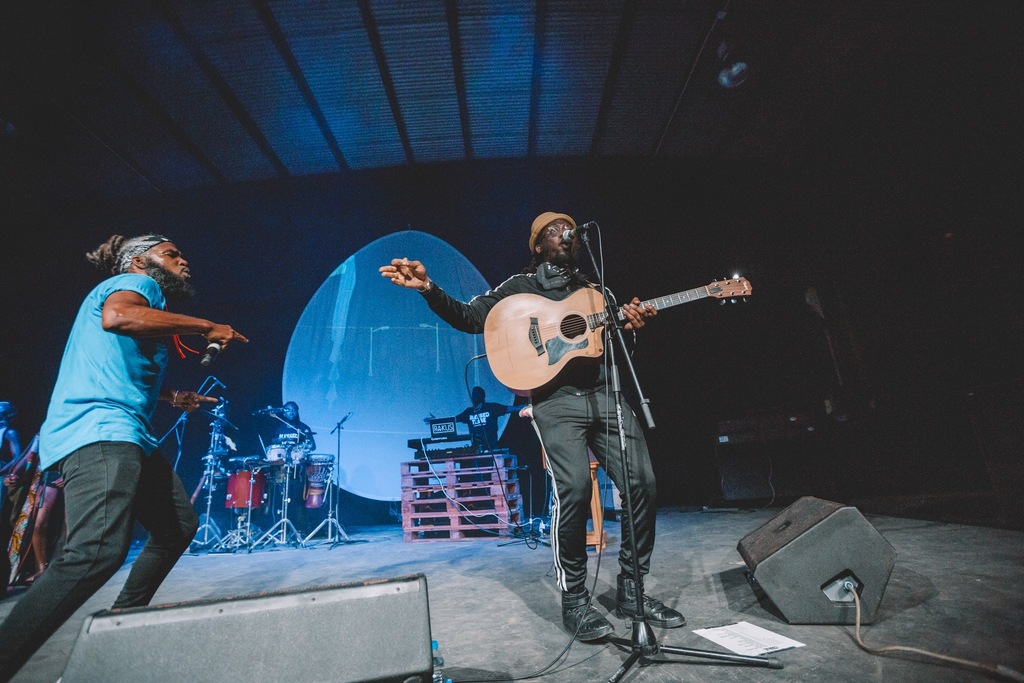 Muhammad Muwakil and Lou Lyons, lead singers of Freetown Collective, on stage at the Sound Forge. Pictured by: Kibwe Brathwaite

‘Feel the Love’ is a musical feast produced by DJ Private Ryan and Sheriff of ‘Differentology’ fame and has been described by many as beautiful and sweet, a song designed to endure beyond Carnival.

It’s not Freetown’s first soca offering. Last year, the group released “Where I Am” late in the season but the market didn’t seem ready for their brand of music.

“It was so different and we released it so late it didn’t get a chance to be appreciated,” says Lou Lyons, the other half of Freetown Collective.

The duo thanks the fan base they have built up over the years, their ‘Residents’ as their fans are called, for giving them the confidence to express themselves in their own way.

One of the things Freetown aims to do is bring back a level of musicality to soca. 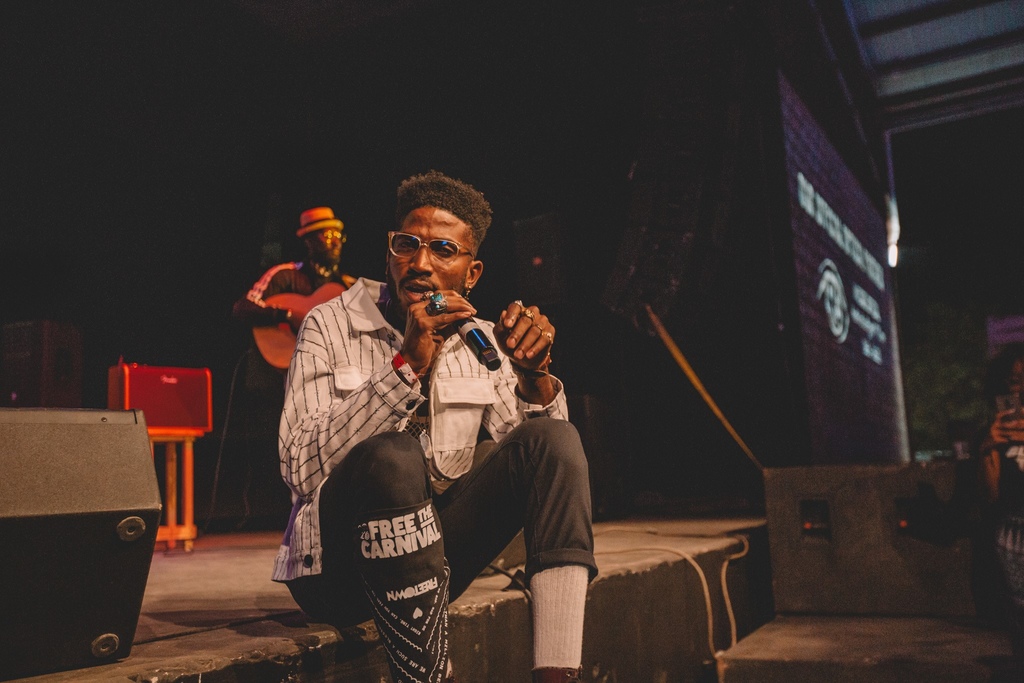 Jimmy October sharing his original music which he calls “New Calypso” with the Free the Carnival audience. Pictured by: Kibwe Brathwaite

The soca EP that they will release on Ash Wednesday is called Yago.

“It is a throwback to what it was and that is a representation of what we are doing, taking it back, bring back some of the musicality. When I put in the ooohs in ‘Feel the Love” it is a sort of throw to Kitchener’s ‘Bee’s Melodies’. I always loved those ooohs as a child so that is an homage to Kitchener,” explains Muwakil.

The five songs on the EP include a song called ‘Blessed’, a love song they believe could become a wedding song.

Freetown’s contribution to the Carnival is part of a wave of new music that does not follow a typical formula. Hey Choppi’s ‘Captain’, Jimmy October and Kees Dieffenthaller’s ‘Magic’ featuring acclaimed Trumpeter Etienne Charles and Voice and Keone’s ‘Ms Carnival; are musical masterpieces that defy the norm as the younger generation stretches the limits of what constitutes soca.

For Freetown, producers hold the key.

“Being in studio with someone so left field and fearless as Sheriff gave us the confidence to even think that way. Cause even if we pen a song that is a love ballad but we want to have a soca production we have to find a producer. That producer has to be comfortable with knowing that could be done but there seems to be a general belief that to do a soca you have to go to the formula, bacchanal, high-energy. It takes some fearlessness to allow the paradigm to be flexible,” says Lyons, giving Jimmy October praise for creating the New Calypso genre.

“That for us is a real powerful notion. To tap back into the parent and find your current swag. You will be influenced by new R&B, Soul, Trap and Hip Hop but calypso has always been a melting pot for world music so what would a 2020, young calypsonian look like who is influenced by pop music? I think it would look like Jimmy October. The music has to catch up to their imagination of it. Our imagination of what the music could be has to interface with the people, so they could give us real-time feedback in a performance space” says Lyons. 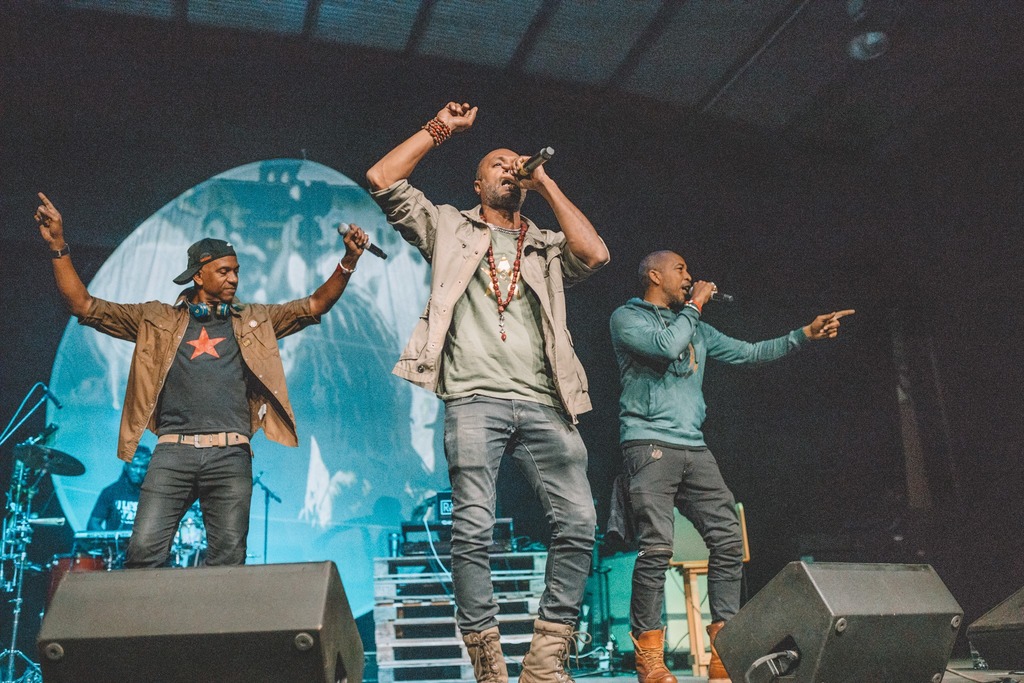 Roger Roberts, Stanton Kewley and Wendell Manwarren of 3Canal, bringing a taste of their trademark Rapso at Free the Carnival last Saturday. Pictured by: Kibwe Brathwaite.

Freetown tested the market with a live performance with their own show called Free the Carnival at Sound Forge in January that featured the likes of 3 Canal who provided the first big stage for them to perform as spoken word artists in 2005.

The artistes say about 10 years ago, every time Wendell Manwarren of 3 Canal saw them he would ask them what they had for the Carnival as though he knew the day would come for them to put their brand of music on the festival.

“He saw it, that we can’t be who we are and do what we do without wanting that space. He knew it,” says Lyons.

“I just couldn’t conceive how,” says Muwakil. “When we going to do the song with Ryan and I said Lou we need to do an album and the minute I said that I get real scared cause I done say it so I have to own up to my word. I never write a soca before except ‘Where I Am’, I don’t even know how to write a soca now I have to write a whole album.”

“In terms of songwriting, tempo, melody and what is possible I feel like I was in a real different place. This has truly opened my eyes.”

Lyons says: “This process has changed how I view music on the whole. For a period of time, soca was irritating.  I would find songs I love and the rest would be irritating. But having now to no longer be an outsider and to crawl in the belly of the thing and live there and let it affect yuh, I realise we have real genius levels, so now I have a new disappointment. My disappointment is that songs like Choppi’s ‘Captain’ might be dead in a year. A lot of our brilliant songs do not last long because we have tied them in a cycle. How do we free the Carnival, how do we allow it to extend our identities all year round?”

Watch: Freetown Collective helps us to see the truth in new video