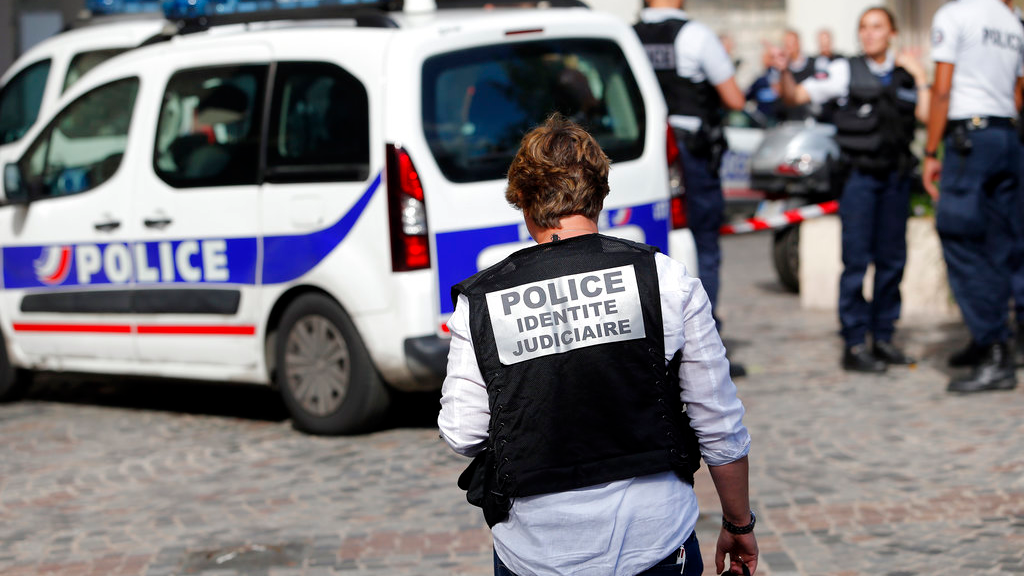 PARIS (AP) — The Latest on an attack on soldiers in a Paris suburb (all times local):

France's interior minister says that a driver intentionally targeted soldiers in a calculated car attack, and that authorities are still searching for the perpetrator.

Gerard Collomb told reporters that the attack near Paris Wednesday marks the sixth time that soldiers with the Sentinelle operation have been targeted. He said that shows the importance of a new terrorism law permanently enshrining some aspects of the state of emergency in place in France since 2015.

Collomb and French Defense Minister Florence Parly visited injured soldiers at the Begin military hospital near Paris on Wednesday. Parly said they received "reassuring" news about three soldiers initially believed to be seriously injured. She did not provide further details on their conditions.

The ministers said the six soldiers hurt in the attack notably suffered injuries to the face, knees, hands and arms.

French police are stopping cars and drivers in the Paris region as they search for an attacker who rammed a dark-colored BMW into a group of soldiers before fleeing.

A security official said Wednesday afternoon that authorities have carried out several stops but have not turned up a suspect or arrested anyone. Six soldiers were injured in the attack.

Government spokesman Christophe Castaner said "all means are mobilized to neutralize the person or persons who are responsible."

He said President Emmanuel Macron discussed the attack at a previously scheduled security meeting Wednesday and a subsequent Cabinet meeting.

Two police officials say that authorities are focusing on a hunt for a single attacker but can't rule out that others could have been involved in the attack in the Paris suburb of Levallois. The officials say that surveillance cameras at the scene captured images of the car's license plate and details they hope will help in the search. The officials were not authorized to be publicly named.

A witness to a car attack on French soldiers is describing an ear-piercing scream of pain and troops chasing after a speeding car.

Nadia LeProhon was startled by a loud crash outside her building in the Paris suburb of Levallois-Perret, and rushed outside to see two soldiers on the ground. Other soldiers ran after a speeding car, shouting "After him! Follow that car!"

She said the scream that followed the crash was still echoing through her head. "I'll never forget that scream — a scream of pain and distress," she told The Associated Press.

Resident Jean-Claude Veillant said he saw two uniformed soldiers prone on the ground when he came down to the entrance of his 13-story building.

"It was horrible," he said, adding that both soldiers appeared to be in bad shape and one of them was unconscious.

Police officials say the driver apparently ambushed the soldiers and rammed into them as they emerged from a building to approach their vehicles to start a new patrol shift.

France's Defense Ministry says three soldiers were seriously injured in a car attack in a Paris suburb but their lives are not currently in danger.

The ministry said in a statement that six members of the 35th infantry regiment were injured in the incident, including three "more seriously."

Defense Minister Florence Parly and Interior Minister Gerard Collomb are visiting soldiers hospitalized at the Begin military hospital in the suburb of Saint-Mande.

It was the latest of several attacks on members of the Sentinelle military operation tasked with protecting French sites after deadly attacks.

French counterterrorism prosecutors have opened an investigation into a car attack on soldiers in Paris suburb that left six injured.

The Paris prosecutor's office says the investigation was opened after Wednesday's incident in Levallois-Perret.

No one is specifically named in the investigation yet, but it aims at pursuing perpetrators on charges of attempted murder of security forces in connection with a terrorist enterprise, the prosecutor's office said.

The move means authorities believe the attack was deliberate and planned with a terrorist motive.

The car and driver have not yet been found.

A Paris suburb where a vehicle rammed into soldiers is home to France's main intelligence agency and a staging point for soldiers assigned to protect prominent sites after recent attacks.

Residents of Levallois-Perret are so accustomed to seeing security forces that resident Roseline Bailleux thought Wednesday's attack was an exercise.

Bailleux, 67, was one of several people who said that the street where the soldiers were hit was nearly always thronged with soldiers.

She was woken in the morning by her husband, who had noticed a crush of ambulances and emergency vehicles.

"We thought it was an exercise," she said.

She said that area was popular with parents and their children but the attack happened when they weren't around.

She said she had been touched by several previous attacks, including the 2015 gun rampage at the Bataclan music venue in Paris — which was next door to where one of her children lived — and the 2016 Nice truck attack, which happened near where she used to live.

"I'm not going to stop walking through the park because of that. ... It can happen to anyone."

Police officials say a driver in a dark BMW is on the run after ramming his car into a large group of soldiers in what appeared to be a calculated ambush in a Paris suburb.

Two police officials say authorities are checking video surveillance of the area near the city hall of Levallois to identify the vehicle and hunt the driver responsible for Wednesday's attack.

The officials said witnesses described seeing a BMW with one person on board waiting in a cul-de-sac near a building used for soldiers from the Sentinelle operation. One official said the attacker hit just as a group of soldiers emerged from the building to board vehicles for a new shift.

Neither official was authorized to be publicly named discussing ongoing operations.

The mayor of a Paris suburb where a vehicle ran down six soldiers says it was a deliberate act targeting security forces.

Levallois Mayor Patrick Balkany denounced on BFM television what he called an "odious attack" and said it was "without a doubt deliberate."

Authorities are searching for the driver and vehicle, which drove away after the incident at Place de Verdun in Levallois, on the northwest edge of Paris.

It targeted soldiers from the Sentinelle security force created after Islamic extremist attacks in 2015.

The incident comes four days after a teenager with psychiatric problems tried to attack security forces guarding the Eiffel Tower.

French police say a vehicle slammed into soldiers guarding a Paris suburb, injuring six of them, before getting away.

Authorities are now searching for the vehicle and driver after the Wednesday incident, according to a Paris police spokesman.

The vehicle appeared to clearly target the soldiers but the motive is unclear, the spokesman said. The official was not authorized to be publicly named according to police policy.

The incident in Levallois, northwest of Paris, is the latest of several attacks targeting security forces in France guarding sites after a string of deadly attacks.